TESS : a chance of discovering a new Earth within 2 years !

Vaonis > Tips & News > TESS : a chance of discovering a new Earth within 2 years !

What if the next life-hosting and Earth-like planet would be discovered within the upcoming 2 years ?

Although the answer is not as obvious as we could imagine, it remains not impossible either, thanks to the very recent launch of the space mission TESS by NASA.

The exoplanet hunting has never been at the heart of our preoccupation as today !

How did exoplanets survey begin ?

Since the discovery of the first exoplanet in 1992 (named Poltergeist and orbiting around a Pulsar), mankind just became aware that the Universe, despite its immensity, could hide other planets, other solar systems and even potentially other Earths, where proliferation of life could be possible.

Before the birth of space telescopes, these planets orbiting foreign stars located inside our Galaxy were mainly discovered in few quantity, using ground-based telescopes only.

We had to wait the 2000s for the famous Hubble Space Telescope to be used for the first time as a tool looking for exoplanets. Its primary task was about to confirm the presence of exoplanet which had been previously discovered. Later on March 22, 2005 NASA announced that its Spitzer telescope performed the first direct exoplanet observation ever. Nonetheless, the performances and availability of the Hubble and the Spitzer telescopes do not make them suitable enough to reach high-expected results needed for this kind of research.

The desire to go further

If the number of discovered exoplanets as of May 2018 reached 3767, it is mainly thanks to Kepler mission which counts 2512 confirmed exoplanets for itself. Definitely the biggest amount of exoplanets for a single mission.

After 9 years of commission, the Kepler’s end of mission is coming and it is currently transmitting its last data before NASA will decide to shut it down forever. However, one the main drawbacks remains its narrow area of monitoring, which was not as wide as what the next generation TESS will perform.
It is time now to dive in depth into TESS scientific and technical details.

TESS : a prolific mission ahead 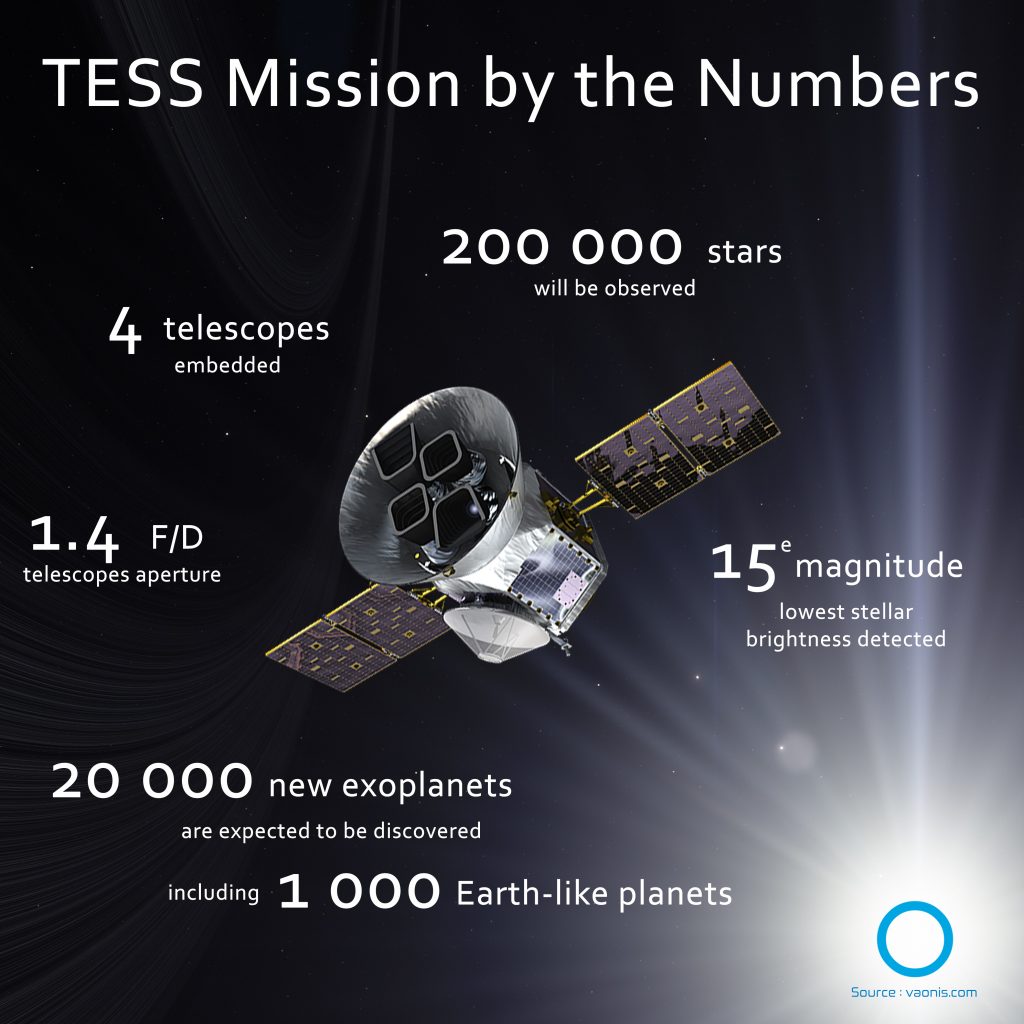 The Transiting Exoplanet Survey Satellite (or TESS) was launched on April 18, 2018 by a SpaceX Falcon 9 rocket.
TESS is not a single space telescope but actually a 4-wide-view-telescope-embedded satellite. During its mission estimated to last two years, scientists want to monitor more than 200 000 bright stars and detect potential change of luminosity caused by an exoplanet crossing the disk of its host star. This detection method of exoplanets is a so-called “transiting method”.

So, the ambition of TESS is to unveil at least 20 000 exoplanets whose 5 % of them would be similar to the Earth, in term of size.

This ambition would be never fulfilled without scanning the whole starry sky. One of the main features of this space telescope is indeed the ability to use four great-aperture telescopes (f/1.4), covering a wide zone of 24×24 degrees each. Consequently, the total zone used by TESS is 400 times bigger than the one used by the Kepler telescope !

How does TESS detect exoplanets ? 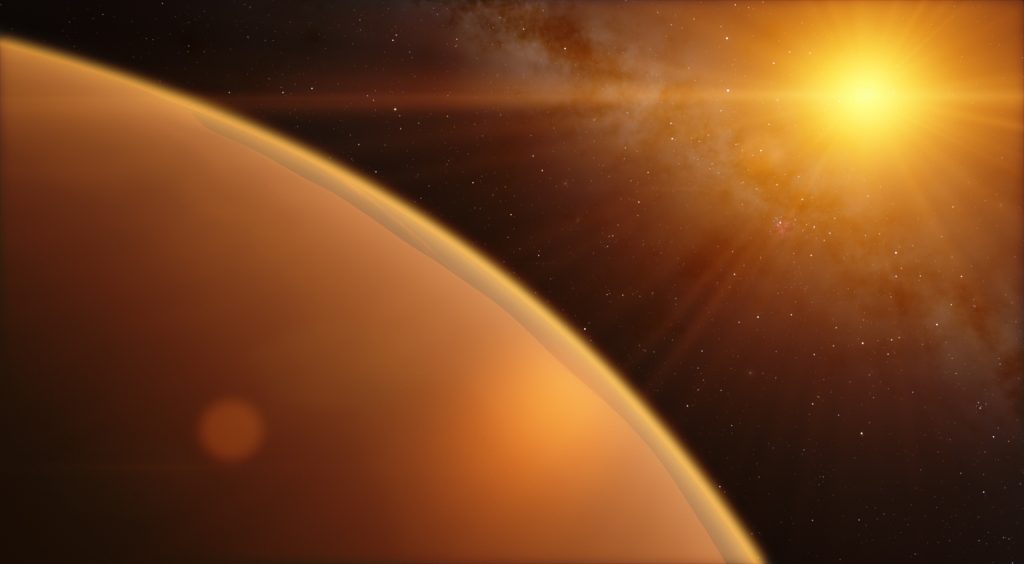 Nearly the whole sky will be observed and divided into North-South hemispheres which count 13 zones each. TESS will perform a single zone monitoring within 4 weeks. It amounts to saying that the 26 zones will be entirely monitored after 2 years.

The orbit where the telescope has been moved on is strongly elliptical, with a 14 days period. Every nearest approach of the Earth, TESS will transmit systematically the data acquired during its 2-week-long measurements. As a matter of fact, these data are mostly images taken by the four CCD sensors of 16.8 Mega pixels each. They are extremely relevant because they contain all the photometric properties of the stars, namely their light variation throughout the time.

From these measurements, not only the size of the exoplanets could be deduced but also the orbital parameters such as their orbital period, distance from their host star… An estimation of their mass could only be done by the biggest ground-based observatories.

Catching some exoplanets using your own telescope is not science-fiction !

Tough, observing exoplanets is not only limited to scientific and professional research. Using less top-of-the-range telescopes, affordable to amateurs, it is actually possible to detect some exoplanets with the transiting method like TESS. A telescope which features a 400 mm minimum focal length, a diameter from 80 mm and a camera – the same specs as the Stellina telescope for example) allow you to make your first lights in exoplanet hunting.

As you might probably guess, TESS is bound to obtain more sensitive light curves and has a far higher efficiency. Its scientific mission is expected to start on mid-June, few times after it will reach its work-orbit.