February sees a bashful sky scene, with the planets huddled near the Sun. 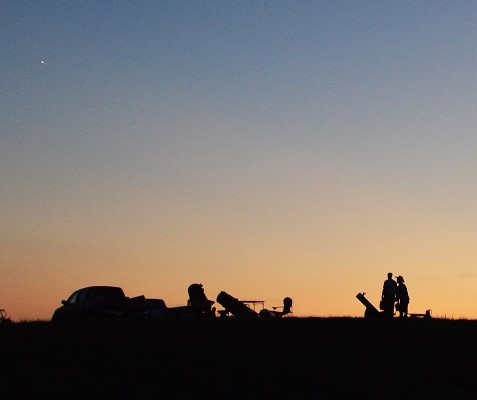 The month of February is thankfully a short one for the denizens of the northern hemisphere. The shortest month of the year and the last full month of astronomical winter up north, February is also the only month that cannot contain two Moons of like phase (i.e., two Full Moons, two New Moons etc. You see this in action in 2022 (more to come on that!)

February evenings in the northern hemisphere still see the iconic winter constellations of Orion and the Winter Hexagon riding high in the dusk sky. You’re looking outward along the galactic plane away from the center of the galaxy when you scan the sky, along the Perseus Arm of the Milky Way through the constellation of the same name. Late February through early March sees the promise of galaxies, as the constellations Leo, Coma Berenices and Virgo enter the scene from the East. These super-cluster regions are littered with galaxies, making Spring up north ‘galaxy season.’

In the southern hemisphere, February cuts summer short as the region heads into Fall in March. The sky is adorned with classic celestial landmarks, including Canopus, the Large and Small Magellanic Clouds, and crucifixes galore, including the False, Diamond and Southern Cross asterisms. 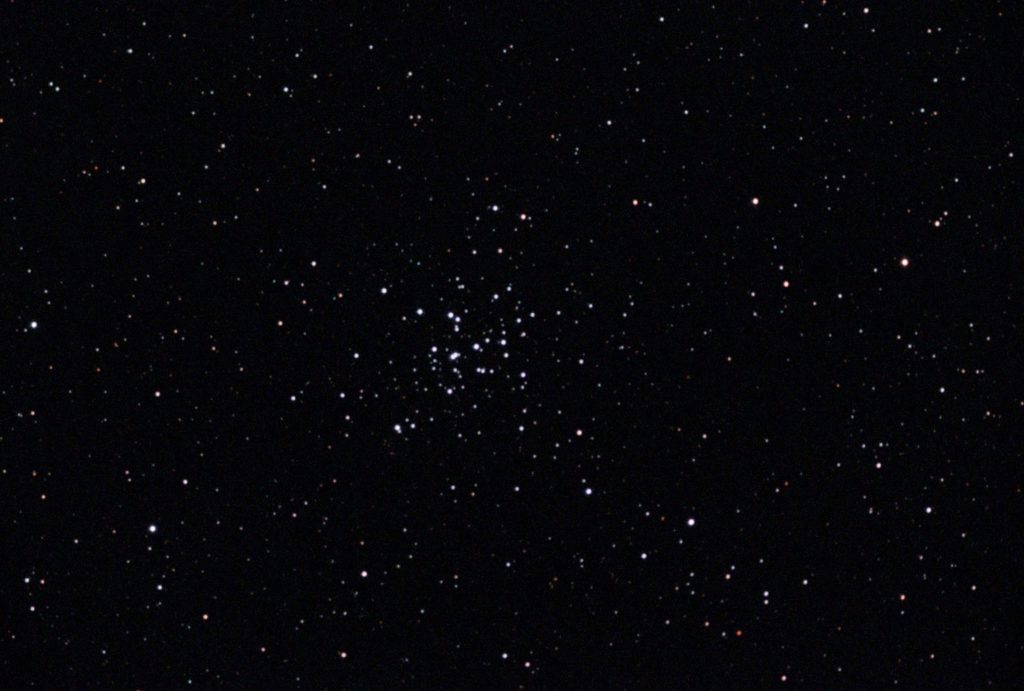 Fun fact: When astronomers pointed the Hubble Space Telescope at a seemingly vacant patch of sky in the constellation of Ursa Major, they found it littered with ancient galaxies, in a region that became known as the Hubble Deep Field. The Hubble team did a similar southern hemisphere analog in 1998, and the newly launched James Webb Space Telescope will peer at the same patches of the sky, once it begins science operations starting in mid-2022. 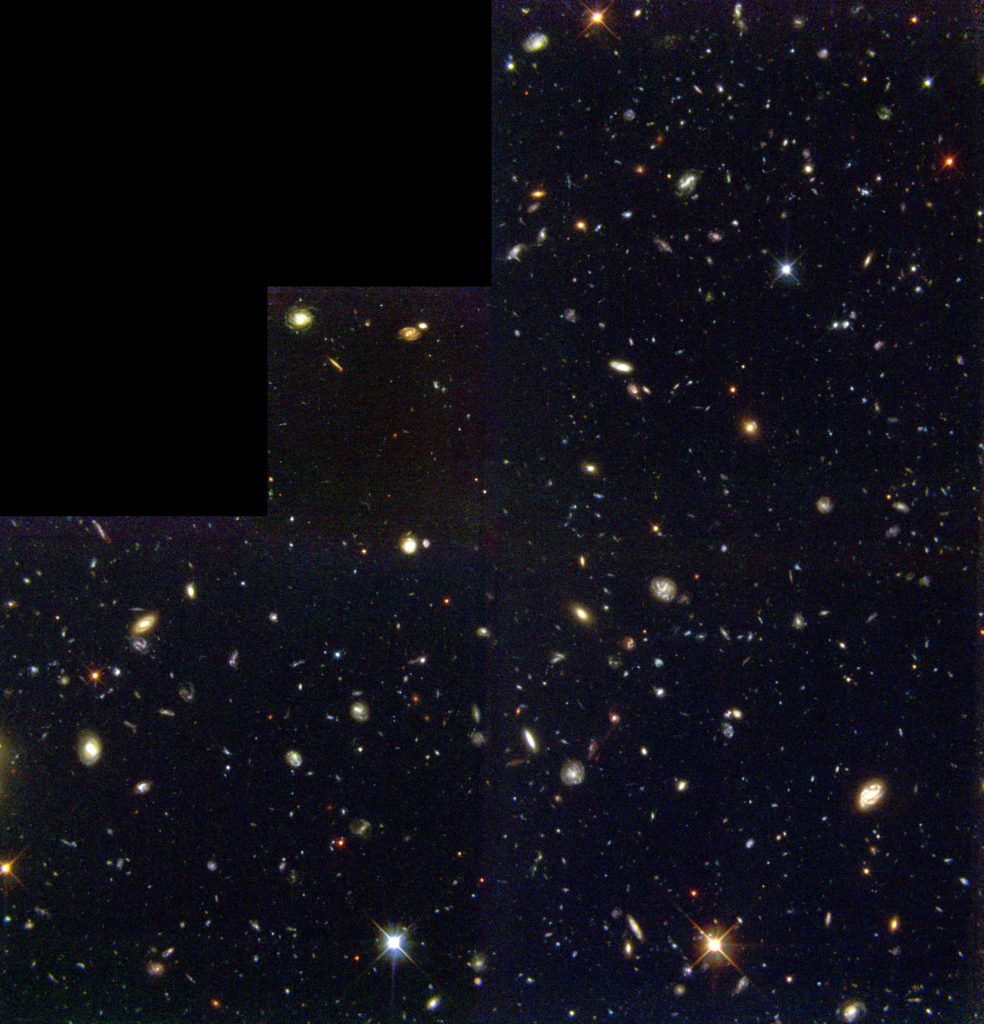 The Moon hits New phase on February 1st right at the beginning of the month, marking the start of a new synodic period 29.5 days long. As mentioned previously, this puts the next New Moon just over the wire into March, but you can at least witness the entire span of a single lunation from waxing to Full and then waning back towards New again this month. In 2022, the February 1st Full Moon also marks the start of Chinese New Year on the traditional luni-solar calendar. Welcome to the Year of the Tiger! 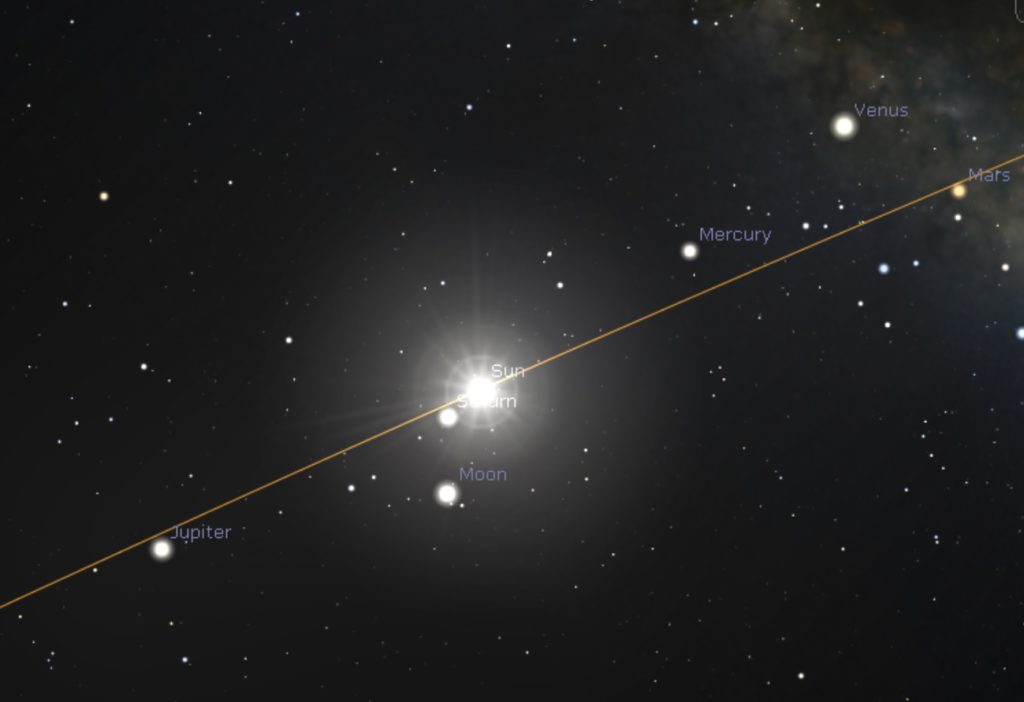 The 60 degree cluster of the Sun, Planets and the Moon on February 1st. Credit: Stellarium.

The planetary rundown in February 2022: You have to get up early in February to catch the naked eye planets, as Mercury, Saturn, Venus and Mars are all loitering low at dawn before sunrise: only Jupiter is left out, low to the west at dusk. That’ll change next month, as Jupiter reaches solar conjunction on March 5th and joins the dawn meetup afterwards.

February meteors: February is an off-month for meteors, though of course, a good sporadic meteor or outburst from an as-of-yet undiscovered meteor stream could always occur at any time. The next annual big ticket meteor shower isn’t until April, when the Lyrid meteors make themselves known. 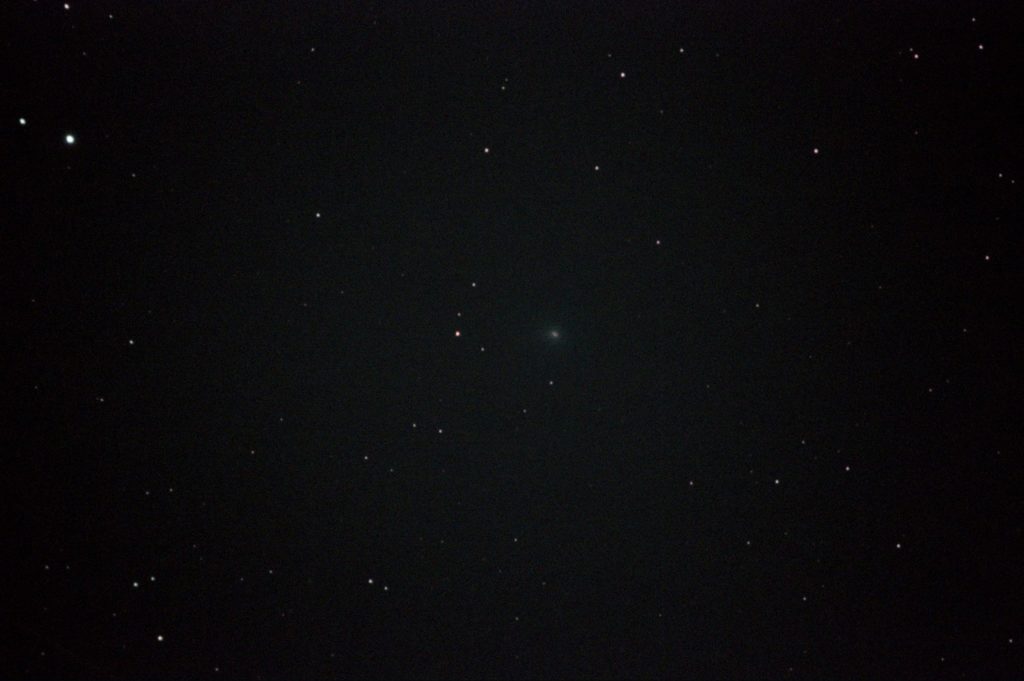 Comets: Comet C/2021 A1 Leonard is no more, as the binocular comet now heads out into interstellar space in the direction of the constellation of Piscis Austrinus on its way out of the solar system. We do, however, have a fine +8th magnitude comet putting on a show at dusk, as Comet 19/P Borrelly reaches perihelion 1.35 astronomical units (AU) from the Sun on February 1st. Currently in the constellation Pisces, 19/P Borrelly is on a 6.8 year orbit. The comet was discovered by French astronomer Alphonse Borrelly on the night of December 28th, 1904, and the Deep Space 1 mission provided us a brief closeup view of the comet in 2001. 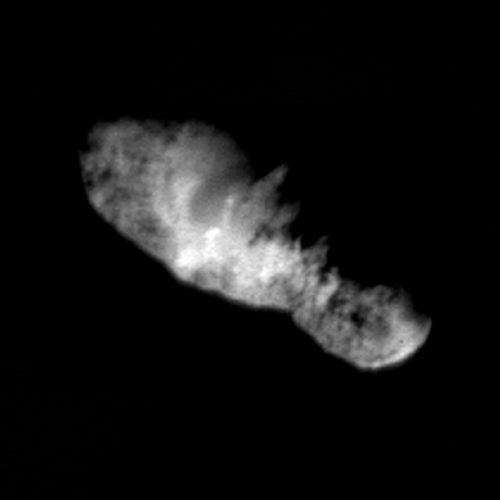 Deep Sky highlight (northern hemisphere) – The Open Clusters of Auriga – lots of star clusters dapple the span of the Perseus Arm in February, and the most famous string spans the constellation of Auriga the Charioteer. 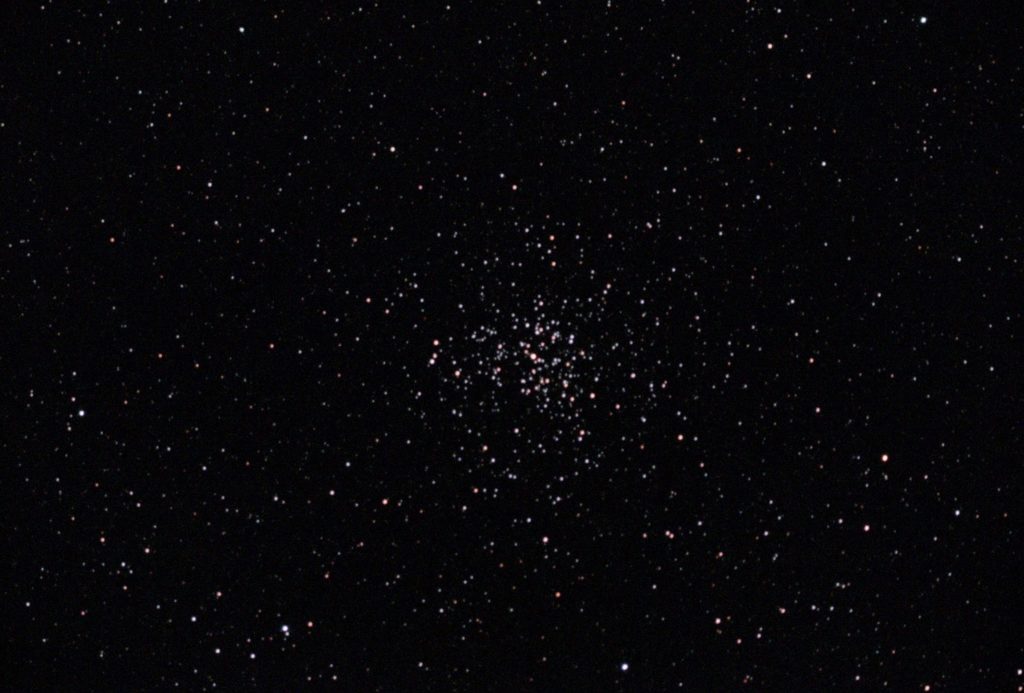 These are Messier objects M36, M37 and M38 respectively, all of which are good binocular objects and—at magnitude +5 to +6—just visible from a dark sky site. These are also very similar in size at 10-15’ across (Messier 37 is my fave!) and about the same distance of 4.2 kilolight-years from the Earth. 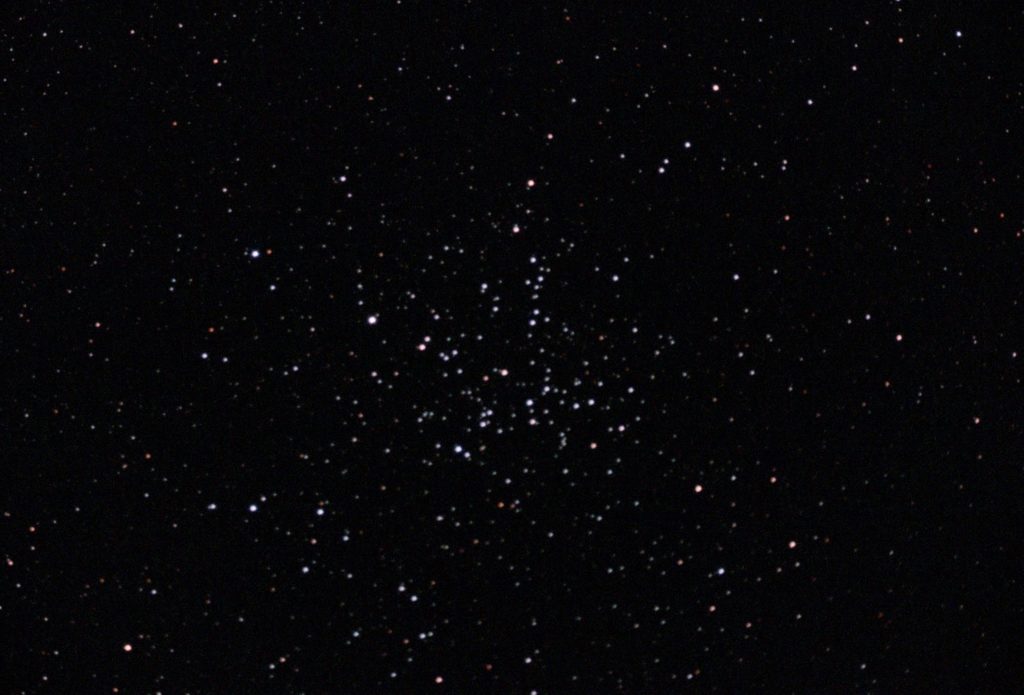 Deep Sky highlight (southern hemisphere) – Exploring the Coal Sack Nebula – One of the most intriguing sites in the southern sky is what you can’t see: the span of the Milky Way is interrupted by dark voids, great stretches of the sky that seem to be largely devoid of stars. One of the most famous is the Coal Sack Nebula in the constellation of Crux the Southern Cross. Magellan’s crew made note of these mysterious voids on their historic trip around the globe in 1522, though ancient cultures such as the South American Inca had always known of them, and even incorporated the negative spaces of the Milky Way as part of their mythological lore.

Today, we know that the Coal Sack is actually a dark cloud of dust and gas 600 light-years distant, obscuring the galaxy beyond.

Challenge object (northern hemisphere) – Hind’s Crimson star – This is one of my favorite star party ‘secret sights’ to show off in the wintertime. Also known as R Leporis, Hind’s Crimson Star is a massive carbon star 1,360 light-years distant in the constellation Lepus the Hare. This distinctive ruddy star really pops out in its field… but be wary, as it’s also a variable star that can dip down to near invisibility at +11th magnitude once every 400+ days. Look for R Leporis at Right Ascension 4 hours 59’, Declination -14 degrees 48’.

Challenge Object (Southern Hemisphere) – VZ Pic (Kapteyn’s Star) – In 1898, Dutch astronomer Jacobus Kapteyn noticed a speedy solitary star in the corner of the constellation Pictor the Easel. Located just 13 light-years distant, VZ Pictoris is crossing the sky at a blazing 8.7 arcseconds a year. An M-dwarf, Kapteyn’s Star is thought to possibly be an ejected member of the great Omega Centauri star cluster. VZ Pic is located at R.A. 5 hours 12’ Dec -45 degrees 2’ and is now known to possess two exoplanets, Kapteyn b and c. It can be fun to watch a star moving as fast as VZ Pic change position over the years, a rarity among stars. 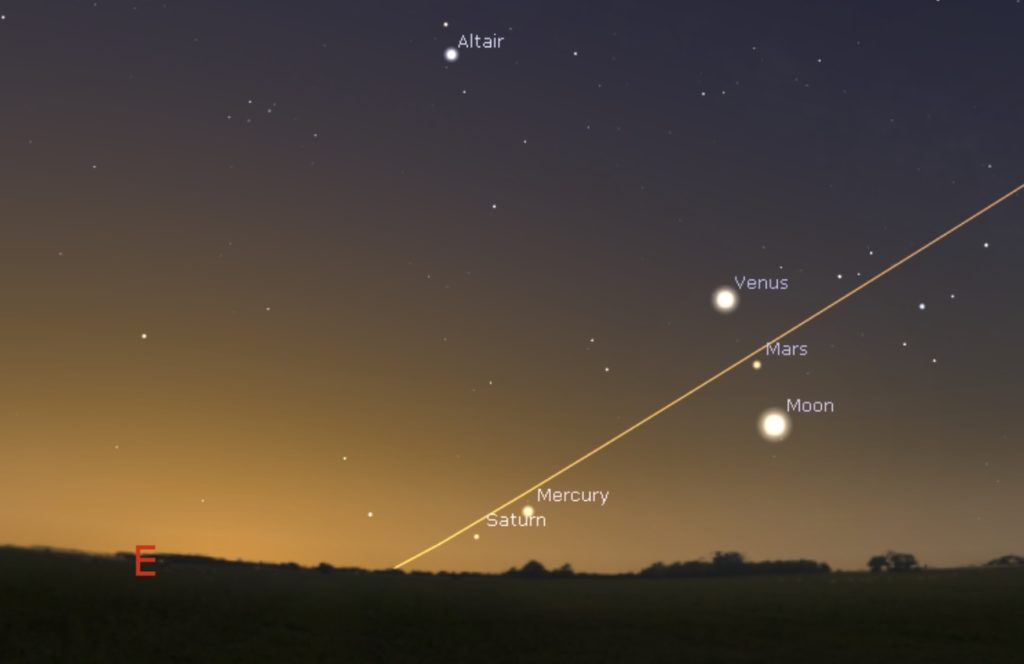 The sky on the morning of February 27th. Credit: Stellarium.

1-Comet 19/P Borrelly at perihelion, may reach +8th magnitude in Pisces in the dusk sky.

17-Mercury is at greatest elongation, 26 degrees west of the Sun in the dawn sky.