November sees the end of the transition from looking inward, to looking out of our Milky Way Galaxy. 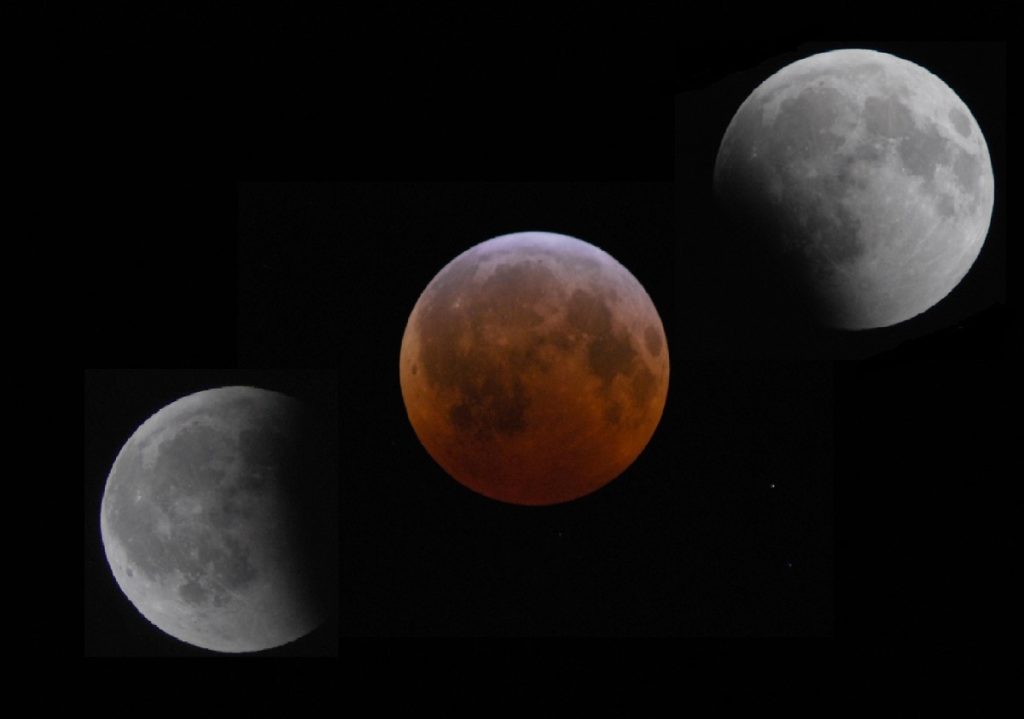 You couldn’t ask for a better month to observe the night sky. Nights are getting longer up north and coming earlier as we ‘fall back’ to Standard Time, and Spring is still in full swing down south.

The November Sky: In the northern hemisphere sky at dusk we see the familiar summer triangle asterism sinking to the west, while the great Square of Pegasus rises to the east and with it, the promise of the Winter Hexagon of constellations. Bright stars, including Rigel, Aldebaran and Sirius all enter the midnight scene in November. This isn’t a coincidence, however; looking out at the Hexagon, we’re seeing part of our home in the Orion Spur of the Orion-Cygnus Arm of the Milky Way Galaxy. It really is closer.

In the southern hemisphere, the evening sky in November looks out towards the south galactic pole, away from the dense plane of our galaxy. The region is not without its own fascinating objects, however. Not only can you see the great three star leap of Fomalhaut, Achernar and Canopus, but the famous Large and Small Magellanic Clouds ride high, dwarf satellites to our own Milky Way Galaxy.

Fun fact: The solar antapex—the direction behind the motion of our solar system that we’re receding from—resides off in the corner of the constellation of Canis Major, not that far from the brightest star in the sky, Sirius. This point rises in November late in the evening. Look off towards the solar antapex, and you’re looking at where we’ve been, in our quarter-of-a-billion year journey around the Milky Way Galaxy. 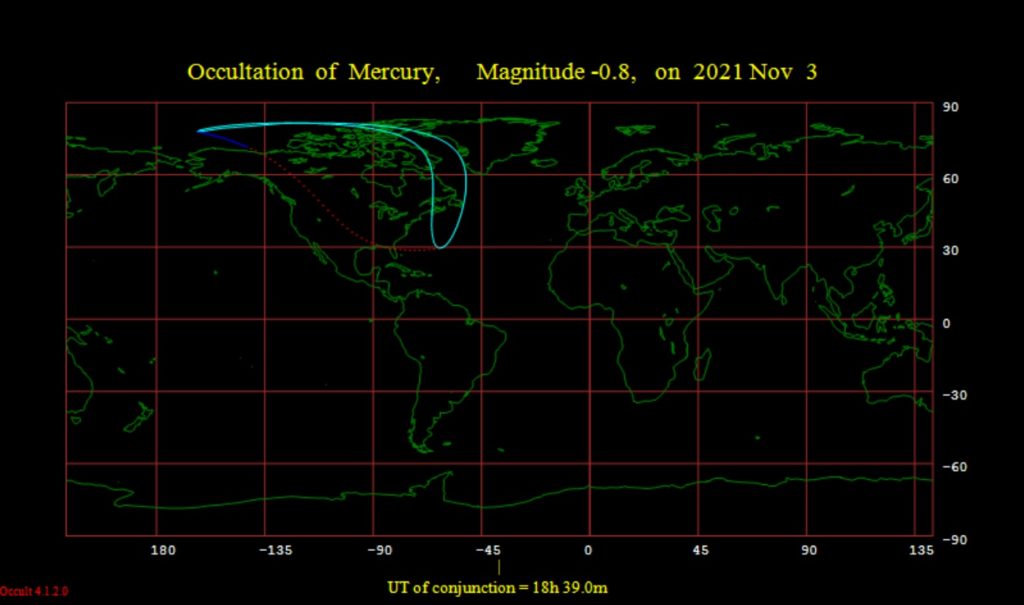 The footprint for the November 3rd occultation of Mercury by the Moon. Credit: Occult 4.2.

The Moon in November 2021: The month of November starts off with the Moon as a waning crescent in the dawn sky, headed towards New on the 4th. The Moon groups with Mars and Mercury on the morning of November 3rd, and actually occults (passes in front of Mercury) for observers lucky enough to be based at the high Arctic on the same morning. 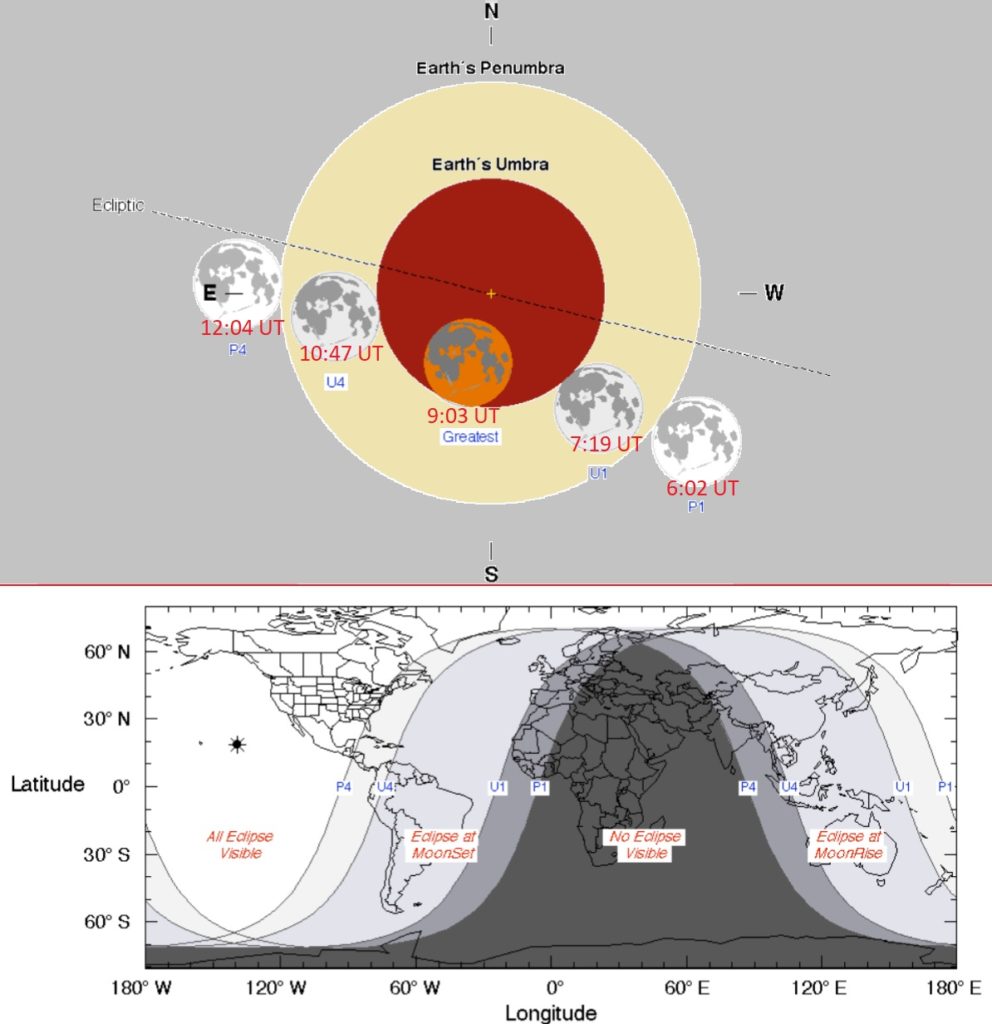 But the big ticket event for November is the deep partial lunar eclipse of the morning of November 19th. We say it’s technically ‘partial’ but only barely so; the Moon will be 97.5% immersed in the dark umbral shadow of the Earth around 9:03 Universal Time (UT). Though it’s a deep partial, expect the upper northwestern limb of the Moon to shade in a characteristic blood red… just like during totality. This eclipse is centered over the Pacific Region, and transpires during the early AM hours for the Americas and at post dusk for Australia and the Asian Far East. 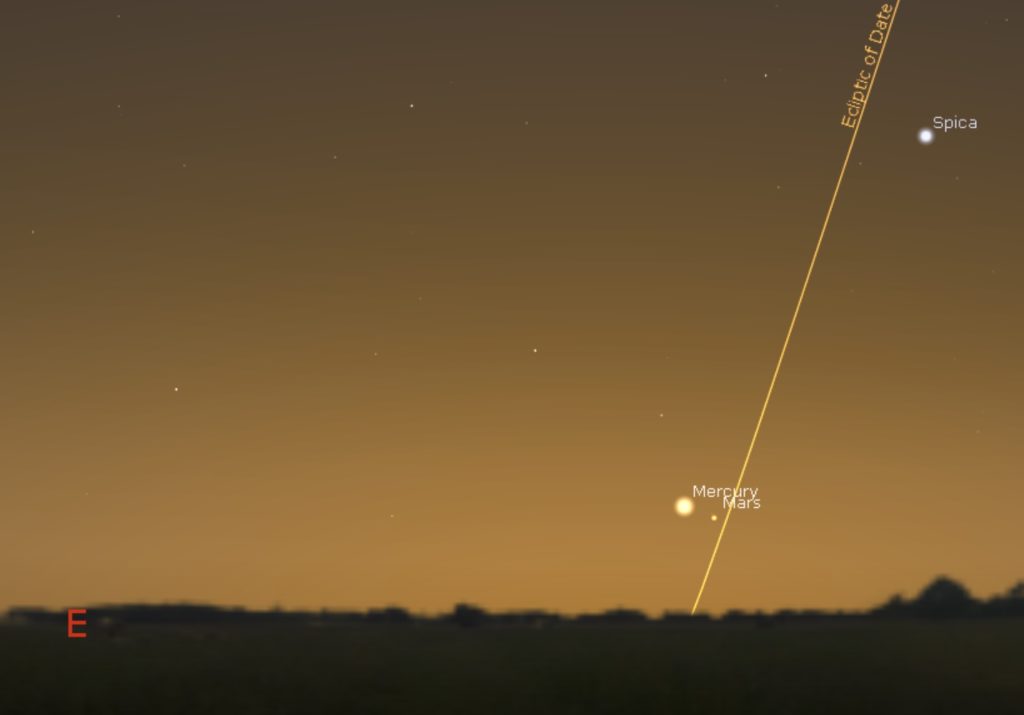 The Planetary Rundown in 2021: November sees brilliant Venus ruling the dusk sky, fresh off of greatest elongation 47 degrees east of the Sun in October. Jupiter and Saturn top off the dusk sights, along with the planet Uranus reaching opposition on November 4th. Mercury is visible at dawn for the first half of November, followed by Mars just reemerging from behind the Sun. Both Mars and Mercury pass very near each other (are in conjunction) just one degree apart on the morning of November 10th.

November meteors: In addition to a steady stream of Taurid fireballs during the season, November is notable for the Leonid meteors, hailing from the Sickle asterism in the constellation Leo the Lion. An off shower on most years, the Leonids are prone to great outbursts once every 33 years, as last occurred from 1998-2001. Unfortunately, 2021 is not a storm year, with an expected rate of 10 per hour at most. To complicate things further, the Moon reaches Full just two days after the peak of the shower on the 17th. Perhaps, the November Leonids will intensify as the decade rolls on. 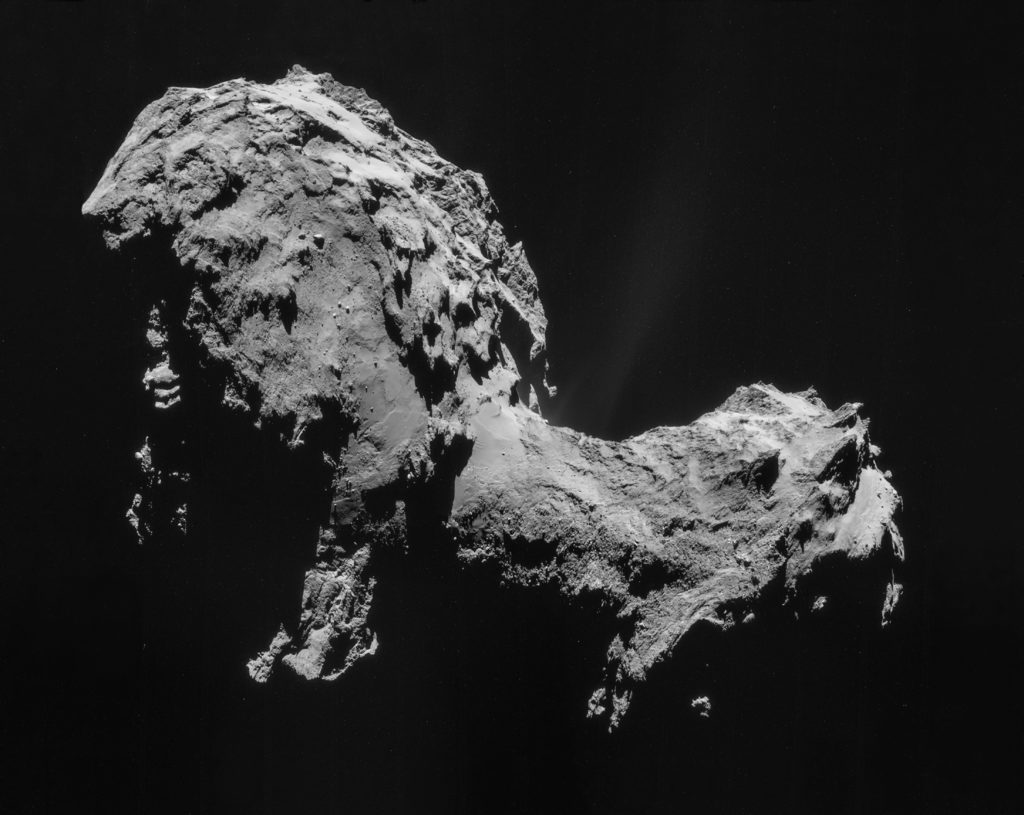 Comets: A few binocular comets are now receding from view this month, the top of which is Comet 67P Churyumov-Gerisemenko, fresh of perihelion 1.2 Astronomical Units (AU) from the Sun on November 2nd. Shining at magnitude +9.5 in the constellation of Gemini, the comet is well placed, high in the northern sky at dawn. 67P is one of the most studied of all comets, as it was visited by the European Space Agency’s Rosetta mission from 2014 to 2016.

Another comet C/2021 A1 Leonard may start to make itself apparent in December (more on that next month!)

Deep Sky highlight (northern hemisphere) The Double Cluster – one of my favorite northern sky targets is one that Charles Messier strangely missed. The gorgeous Double Cluster is made up of NGCs 884 and 869, and straddles the border between the constellations Perseus and Cassiopeia, speckling the binocular field of view with stars. Both clusters lie about 6.8 kilolight-years distant, and are physically interacting with each other. At magnitude +3.5 the clusters are an easy catch with the naked eye from a rural dark sky site, and really pop in a low-power field of view.

Deep Sky Highlight (southern hemisphere) The Helix Nebula – quick: what’s the closest planetary nebula to the Earth? That would be the Helix Nebula in the southern constellation of Aquarius the Water-Bearer. At 500 light years distant, the Helix Nebula (NGC 7293) is about 25’ across, nearly as big as a Full Moon. It’s large, wispy appearance is very different from the tiny, nearly-starlike points of more distant planetary nebulae… but the least bit of light pollution will kill the Helix, making it vanish from view. You’re looking at a remnant of a star like our own Sun at the end of its main sequence career. 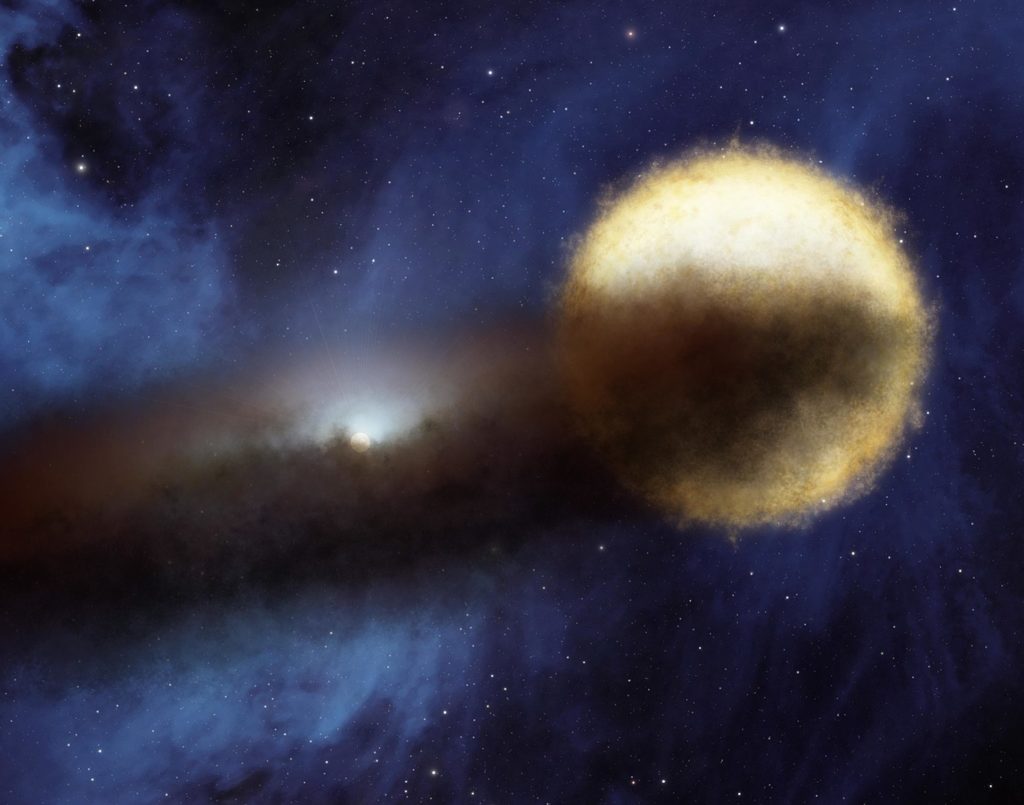 An artist’s conception of the Epsilon Aurigae system. Credit: NASA/JPL-Caltech

Challenge object (northern hemisphere) The riddle of Epsilon Auriga: long before KIC 8462852 was puzzling astrophysicists, there was the star Epsilon Auriga in the Kids asterism of the constellation of Auriga the Charioteer. Once every 27 years, this ordinarily placid +2.9 magnitude star suddenly undergoes a quick drop of a full magnitude… and remains there for an amazing 640-730 days. This drop can actually be seen with the unaided eye, a rarity among variable stars. What gives? Clearly, the primary star in the Epsilon Auriga system is orbited by a dark, occulting object, passing along our line of sight. The current working theory is that a small pair of B-type stars orbits Epsilon Auriga once every 27 years, enshrouded in a dense debris disk. The last event for Epsilon Auriga was around 2010, and the next one will occur in (mark your calendars): 2037. 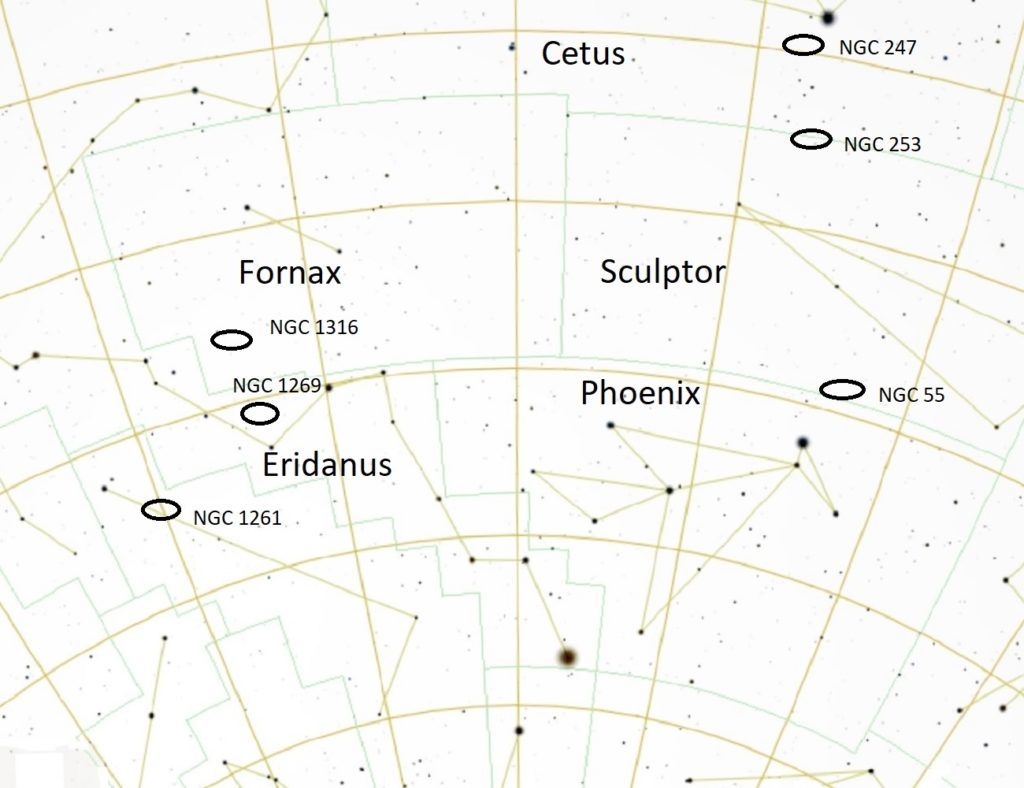 Challenge Objects (Southern Hemisphere) Galaxies… down under? The usual mantra in observational astronomy is that the southern hemisphere has all of the good clusters and nebulae, while the north has all the good galaxies… but there are a few notable galaxies visible in southern skies in November. Among these are NGCs 1316, 55, 247 and 253, all of which are brighter than +10th magnitude and part of the distant Sculptor and Fornax groups of galaxies. All of these galaxies are visible on November evenings in the dusk sky.