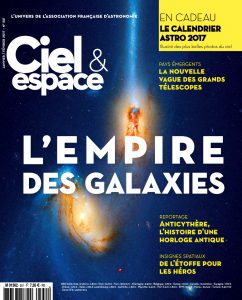 Ciel & Espace astronomy magazine, published by the French Association of Astronomy (AFA), talked about Stellina telescope in its January/February 2017 issue. In this article dedicated to the Rencontres du Ciel et de l’Espace event that happened in Paris in November 2017, the author shared his discoveries and gave an an overview of the products showcased during the trade show. “A trade show full of surprises” he shared, mentioning amongst other products Stellina telescope design by Vaonis:

“Even more surprising, the young start-up Vaonis presented the prototype of its telescope Stellina. It will be to the telescopes what the iPhone was to the mobile phones: a clean cube with a single button and able to take pictures of the sky automatically via an application.”

Read the full article in the Ciel & Espace magazine, issue #551 page 108 on www.cieletespace.fr (French only)

A year later, it is an entire page dedicated to the magazine telescope that was published about the telescope: “The Stellina arrives on the market“. Find the article in their issue #557 (January/February 2018) in kiosks or online on the magazine’s website.