Comets which made history…

Like solar and lunar eclipses or even meteor showers, comets are considered as the most tremendous astronomical phenomena. Since Antiquity, comets were already part of our culture since they were represented in paintings or engravings in religion or arts. Their origin was not as well understood as today.

Among some of the 6339 comets discovered until now, few deserve to be mentioned on account of the overwhelming shining tails left after them and their scientific interest. Find below our selection of the comets which helped in building the history of astronomy, or more generally humanity’s. 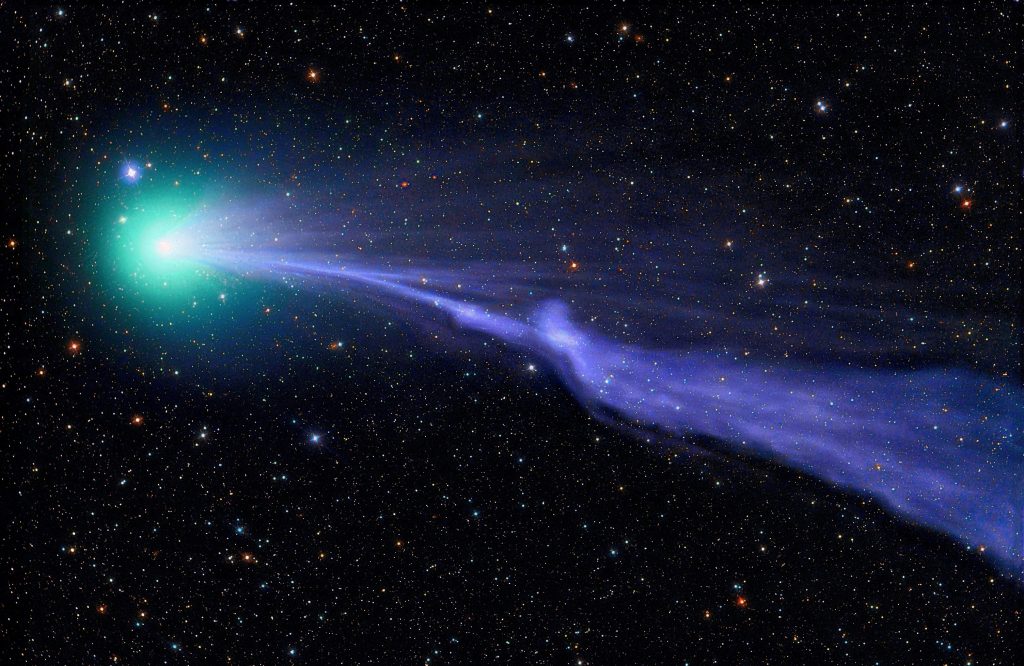 Comets, meteors and asteroids: what difference?

Comets are small icy bodies whose size ranges from hundreds of meters up to dozens of kilometers large. Comets would have been formed during the earliest stage of life of our solar system and are since then orbiting the Sun. When they travel too close from our burning star, their icy nucleus warms up, and due to sublimation, produces a dusty tail that can spread itself until hundreds of millions kilometers wide. Actually, it is this white or blue tail which makes comets visible from Earth, because of sunlight reflection. More rarely, a comet’s tail can be seen with an unaided eye for several months.

Meteors are dust originating mainly from comets. If the Earth crosses remnants of a comet’s tail – which happens with Perseids, Geminids, Leonids… – particles composing it are starting to fall off the Earth, because of the gravitational force. The extremely high initial velocity of these particles participates in increasing the friction with molecules located in the upper layers of Earth’s atmosphere. Friction is causing the meteoroids to break apart with high temperature, a phenomenon in which an intense and short stray of light is released, called meteor or shooting star.

Asteroids are totally different from meteors but pretty similar to comets. The difference is that they are not made of ice, but rocks. Consequently they do not feature any tails and are not as easily visible as comets, requiring astronomicals instruments to be observed. 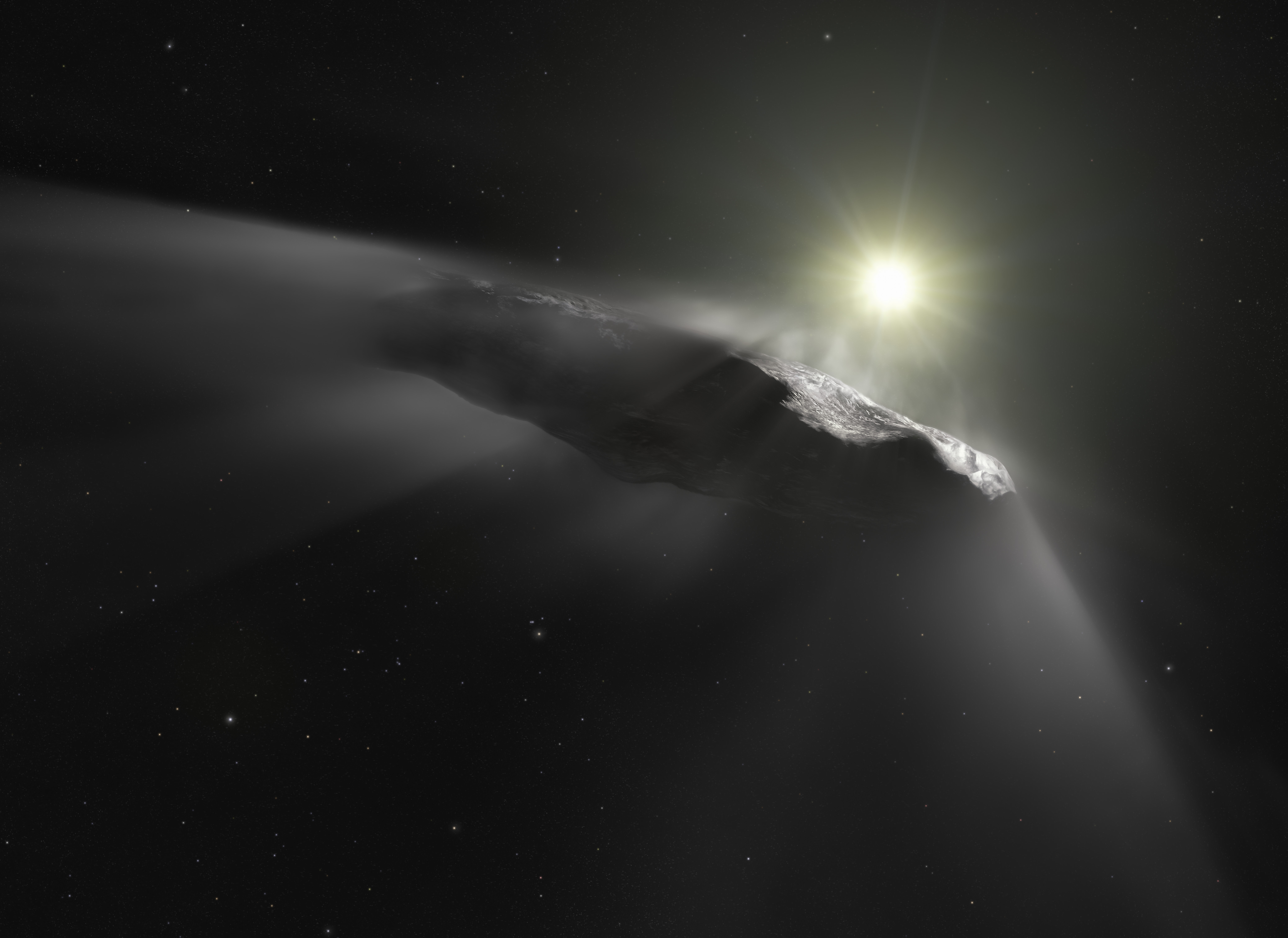 This strange looking planetary object whose discovery was made a year from now is still feeding controversial debates between astronomers. Initially admitted as a comet, then modified as an asteroid, the scientific community does not exclude its comet-like properties. In any cases, OUMUAMUA is the first ever interstellar body to be found in our solar system, and potentially the first comet coming from another star! More details about OUMUAMUA in our article >>. 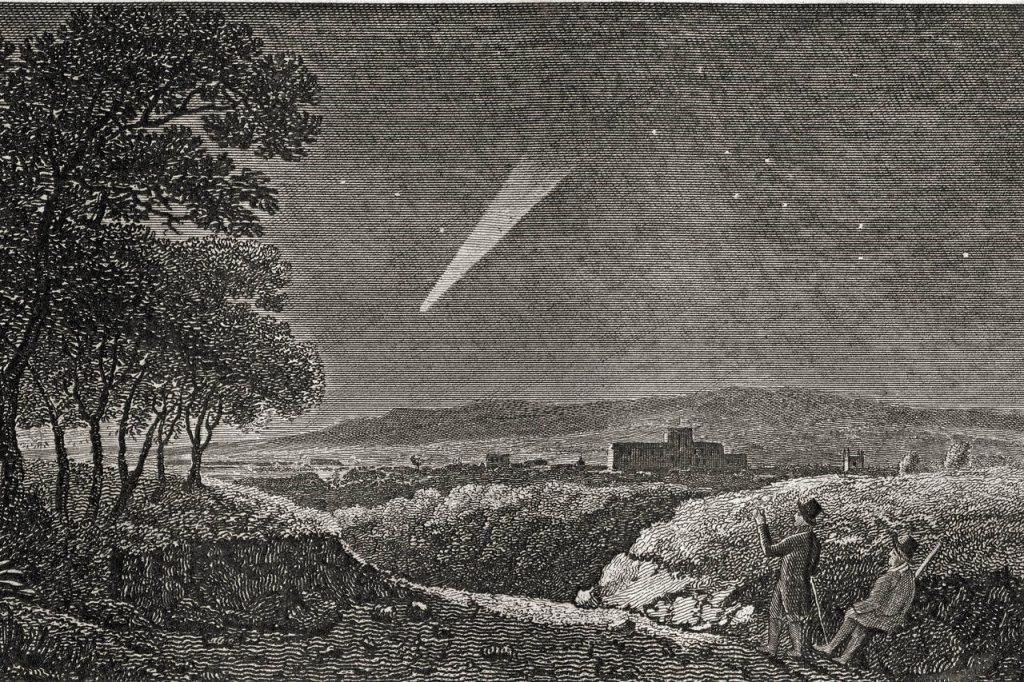 Drawing of the great comet of 1811, by Mary Evans

Discovered in March 1811 by a French amateur astronomer, comet C/1811 F1 was considered as one of the brightest comets ever observed in the 19th century, reaching a magnitude of 0 and visible to the naked eye for almost 9 months with a coma of 25° maximum angular distance.

This comet is beyond the shadow of a doubt the most popular celestial object after the Sun, the Moon and the planets. However, do you know why this comet has become so famous?
Its first testimony was written in -240 BC, inside the Chinese book “Shiji”. Few century later, in 1705, and after several appearances of the same comet, the astronomer Edmond Halley was the first to prove the periodic trajectory of the comet. Thus, 1P/Halley became the first ever discovered periodic comet, with a frequency ranging between 74 and 79 years.

During its latest visible appearence in 1989, Halley’s comet was also the first one ever approached by space probes: the Soviets probes Vega 1 and 2 which flew over the nucleus at less than 9 000 kilometers, followed by the European probe Giotto which crossed it under a 600 kilometers radius!

To observe it, you will need to be patient: its next appareance is expected in 2061. 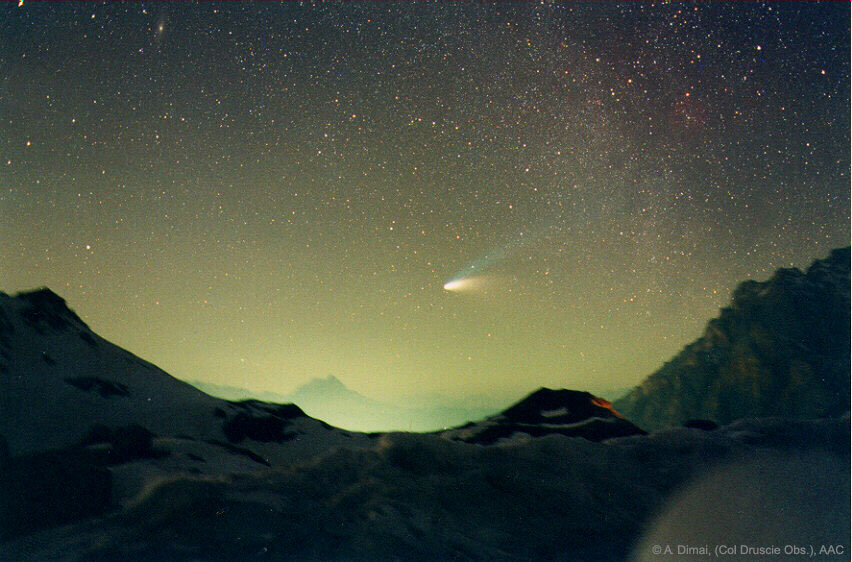 Hale-Bopp is one the furthest comets ever captured by amateur astronomers. Indeed, it was located beyond Jupiter’s orbit, at 7.15 Astronomical Units when it was discovered on July, 23 1995. With a spectacular brightness, it can be considered as one of the most viewed comets of Human’s history since it holds the record of the longest visibility period to the naked eye: a total of 18 months spread out around its intensity peak of april 1997.
If its nucleus’s diameter of 40 km was determined by the Hubble space telescope, its rotating period of 11.4 hours had been estimated with the help of the French Pic du Midi Observatory! 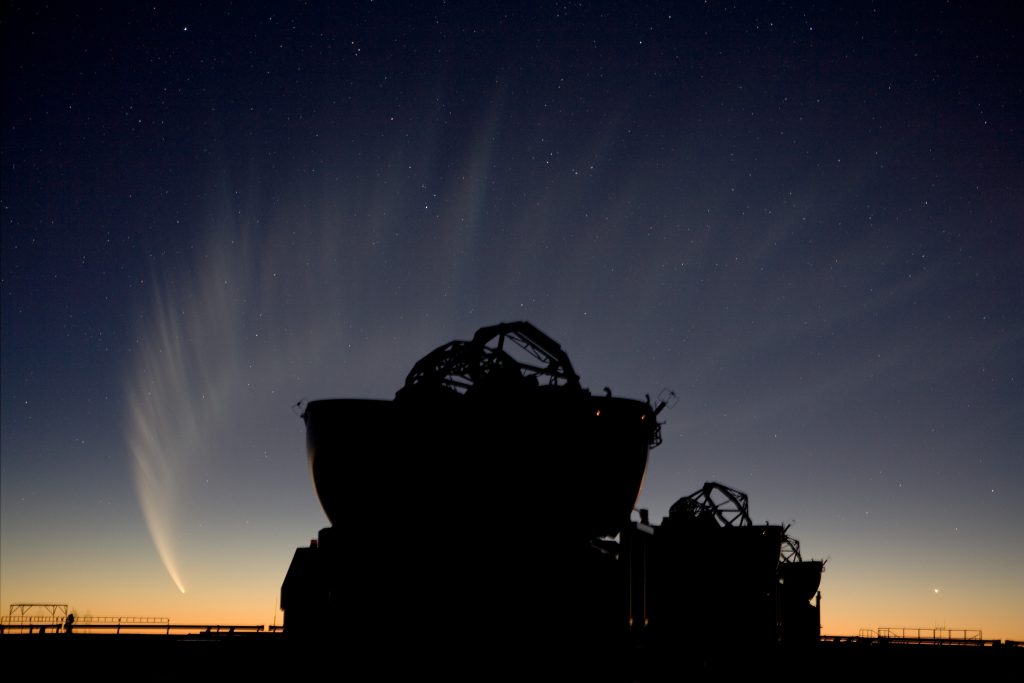 Mc Naught is ultimately the most impressive comet of the 21st century thanks to its giant icy and dusty tail stretching around 35 degrees in the sky which helped a rich amount of sunlight to be reflected onto it. Its magnitude eventually reached -5.5 during its activity peak between January 12th and 14th 2007, or in other words brighter than any other stars and planets! A mindblowing display that only the Southern Hemisphere amateur astronomers got the chance to observe. 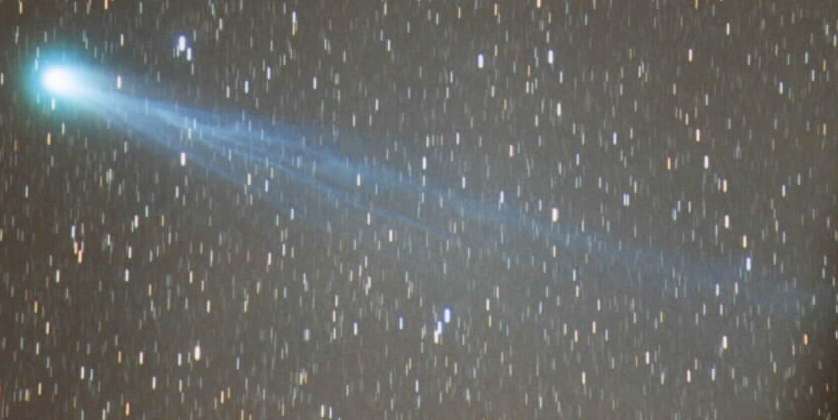 In a world where gigantic state-of-the-art telescopes monitor the sky every nights, it is still possible that astronomy lovers discover themselves comets while observing. This was the case of the Japanese Yuji Hyakutake on January, 30th 1996, who discovered comet C/1996 B2 with his simple 25×150 binocular!
Hyakutake is the first comet whose tail has been crossed by a space probe (Ulysses), although it was a pure coincidence! 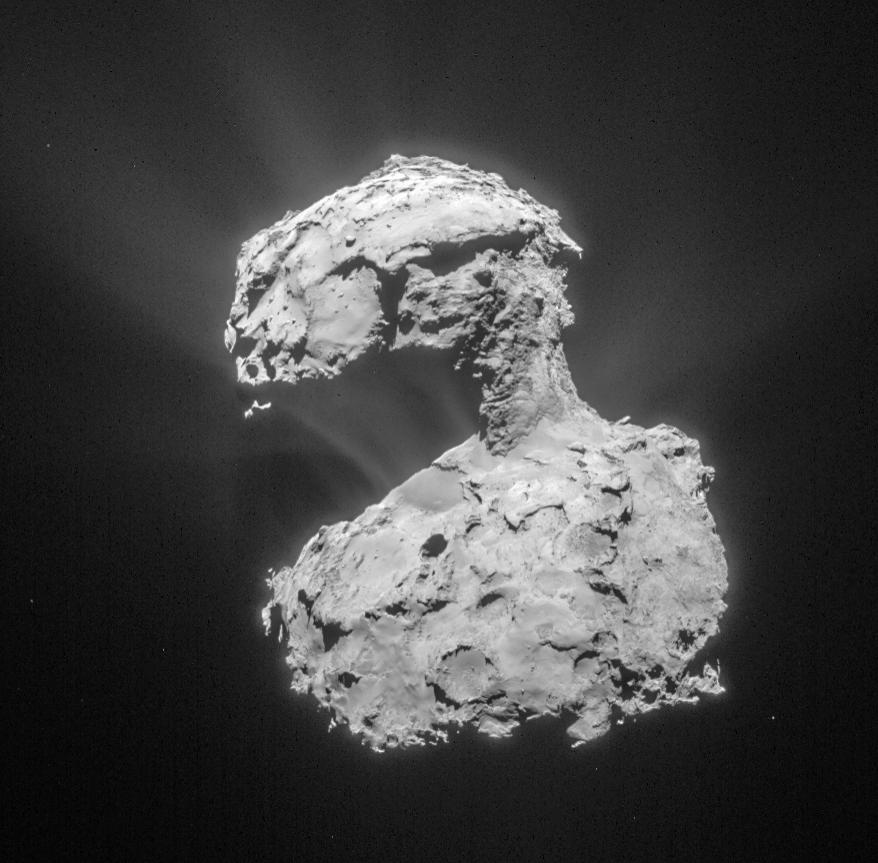 Comet “Tchury” does not owe its popularity to its very modest properties and brightness but to the space exploration mission dedicated to it: Rosetta. This European probe launched in 2004 traveled alone for about 10 years within the solar system in order to reach its promised target and orbit around it: a never achieved mission. Rosetta did not rely on this success and launched its hidden baby lander “Philae” which touched down the comet’s surface on November, 12th 2014. Philae studied the composition and the chemical properties of the comet few days on. This mission had an ambition rarely reached by any space missions until now.

In 1994, space and ground-based telescopes witnessed a rare planetary catastrophe: comet Schoemaker-Levy which had broke apart in 21 pieces two years ago collided with the gas giant Jupiter. Predicted by celestial mechanics calculations, this event of exceptional beauty had been waited for a while by worldwide astronomers,  a rare occasion to study the properties of the comet and its collision with Jupiter. The scars caused by the impact of the fragments of Schoemaker-Levy onto the surface of Jupiter remained visible for several months.