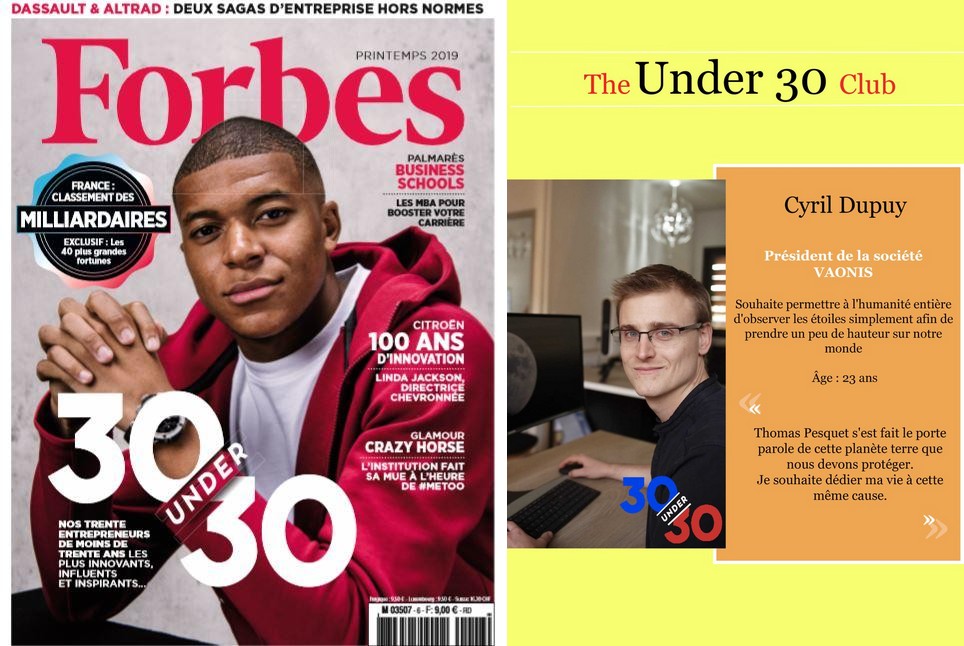 Cyril Dupuy, who imagined Stellina and ceated the company Vaonis in 2016, was selected in March 2019 by the French edition of Forbes magazine to appear in its annual list of « 30 Under 30 ».

The Forbes France “30 Under 30” list rewards 30 young people under 30, entrepreneurs, athletes, creators, engineers who have emerged or are emerging in their field. A jury of experts – composed of Dominique Busso, CEO of Forbes France, Frédéric Jousset, founder of Webhelp, Taïg Khris, founder of OnOff, Chantal Baudron, head of a management consulting firm, and Stéphanie Hospital, founder of the OneRagtime investment fund – has scrupulously studied the various applications according to specific evaluation criteria. Each assigned one score per candidate, and the total score then selected our 30 winners for the 2019 edition of the “30 Under 30“. This is how the CEO of Vaonis was selected within the French laureates.

In the paper version of the magazine, we can read the portrait of the founder and the start-up:

« Vaonis is a start-up that wants the world to observe the stars simply, to take a little height on our world and to be aware of the present and future issues. Stellina is a first step: it is a hybrid between a telescope and a camera that lets anyone, child or adult, to discover the universe around us. Designed by a team of French astronomy and new technology enthusiasts, Stellina is the world’s first all-in-one smart telescope to photograph stars.

Catchline: The universe at your fingertips »