Something struck the largest planet in the solar system last week. 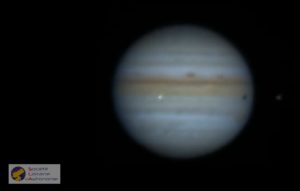 It’s always worth keeping an eye out for the unexpected, even during routine observations. Just such a surreptitious occurrence happened just last week, when observers from South America to Europe caught sight of a bright flash on Jupiter.

The Impact: The event occurred around 22:39:37 Universal Time (UT) 6:39:37 AM Eastern Daylight Saving time (EDT) on September 13th in the equatorial zone of Jupiter. The event also happened to transpire during an ongoing shadow transit of the innermost Galilean moon Io, while it was casting its shadow back on to the cloud tops of Jove. Most likely, the flash was due to a comet or asteroid a few hundreds of meters across, burning up in the atmosphere of Jupiter. No impact scar was noted on the evenings after the event. The discovery sent observers around the world scrambling to review video and photos taken around the same time, yielding multiple confirming views of the same impact flash. News of the impact made its way around the astronomical community via online message boards and social media, most notably Twitter, the first place we heard about the sighting.

This impact occurred at an ideal time, as Jupiter just passed opposition early last month. As the name implies, this is the point when Jupiter is ‘opposite’ to the Sun as seen from the Earth, rising in the east as the Sun sets in the west. Orbiting the Sun once every 11 years, Jupiter reaches opposition once roughly every 13 months, moving about one constellation eastward along the zodiac annually as it does so. Jupiter is also a fast rotator, spinning on its axis once every 10 hours. This also means that you can see the entirety of the planet around opposition, in one night.

History of impacts: Of course, the memory of that most famous of all planetary impacts is still a fresh–that of Comet Shoemaker-Levy 9 hitting Jupiter back in 1994. At the time, it was thought that such impacts were relatively rare.. but no less than seven impacts have been witnessed on Jupiter in the quarter century since Comet Shoemaker-Levy 9 made its cosmic crash into Jove. This is a testament to the rise of modern planetary imaging and video technology, allowing for nearly constant coverage of the planet worldwide… how many impacts managed to sneak by the eyes of observers before the 21st century?

Current thinking among planetary astronomers is that Jupiter acts as a sort of goal tender for the inner solar system, deflecting and taking hits from many of the incoming intruders from the distant outer solar system. In fact, any incoming comet stands about a 40% chance of having its orbit altered by Jove during a perihelion passage… this famously happened to Comet Hale-Bopp in the late 1990s, which had its orbit shortened by several thousands of years.

Be sure to keep a sharp eye out, even during routine astronomical observations… you never know what might just turn up.