Observing the Sun with Vespera and Stellina

Vaonis > Travel journal > Observing the Sun with Vespera and Stellina

Observing the Sun with Vespera and Stellina 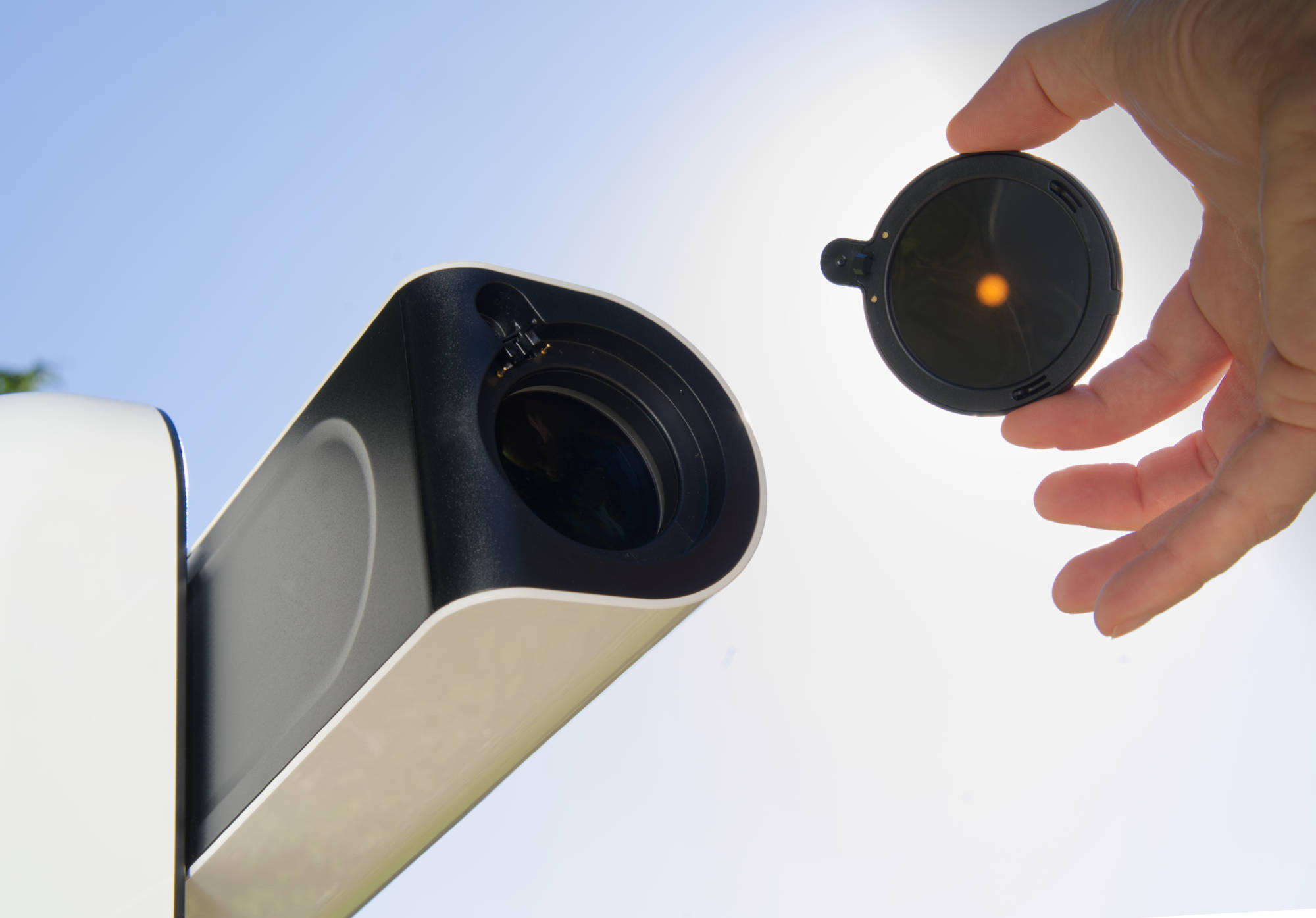 The Vespera solar filter is easily fitted to the front of the observation station’s lens and is automatically recognized by the Singularity app so you can start your solar observation with complete peace of mind.

1. What part of the Sun can you observe?

The Sun comprises several layers. Although it has no solid surface, one of the outer layers – called the photosphere – is the source of more than 99% of solar radiation. In practice, the photosphere is what is referred to as the Sun’s surface, and it is this layer that you can observe with Vespera and Stellina fitted with the solar filter.
The photosphere is about 400 kilometers thick and has a temperature of about 5500°C. 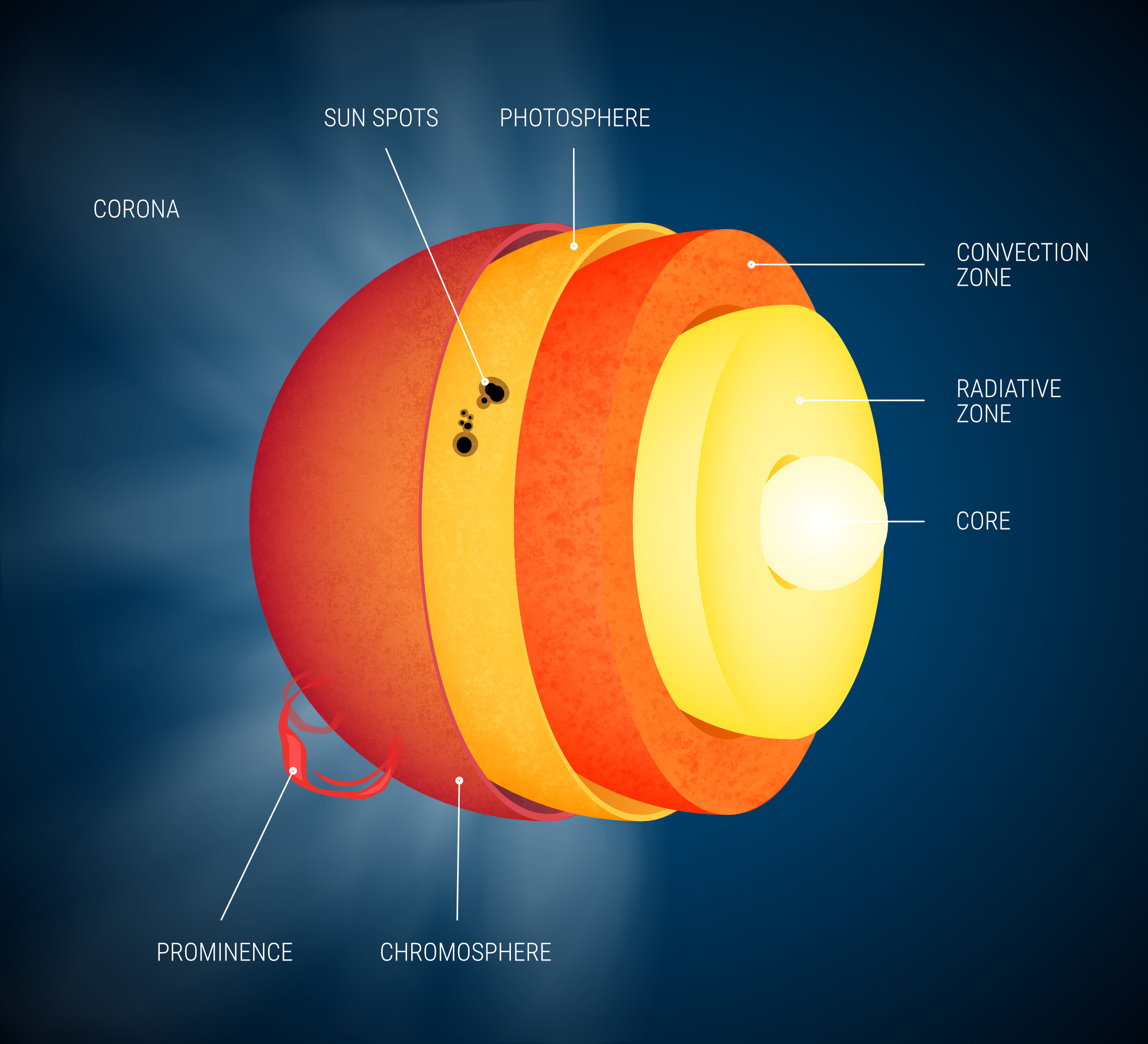 The structure of the Sun. Vespera, fitted with the solar filter, allows users to observe the photosphere – Illustration: Sébastien Aubry.

The part around the photosphere is the solar atmosphere. Its lower part is called the chromosphere and is only observable with special instruments able to filter the part of the light spectrum corresponding to H-alpha emission. We can also see fragments of it (solar prominences) during a total solar eclipse (pink spots on the edge of the disk).
Finally, the upper part of the solar atmosphere is called the corona and can be observed either with a specific instrument called a coronagraph, or with the naked eye during a total solar eclipse.

2. What can you see on the Sun’s surface when using Vespera and Stellina fitted with the solar filter?

The photosphere has a relatively uniform appearance without permanent formations, unlike those that can be found on the planets or the moon. However, isolated or groups of dark spots appear regularly. These are known as sunspots, which can be clearly seen with the observation stations. However, sometimes the Sun’s surface does not have any spots (see below for more explanations). 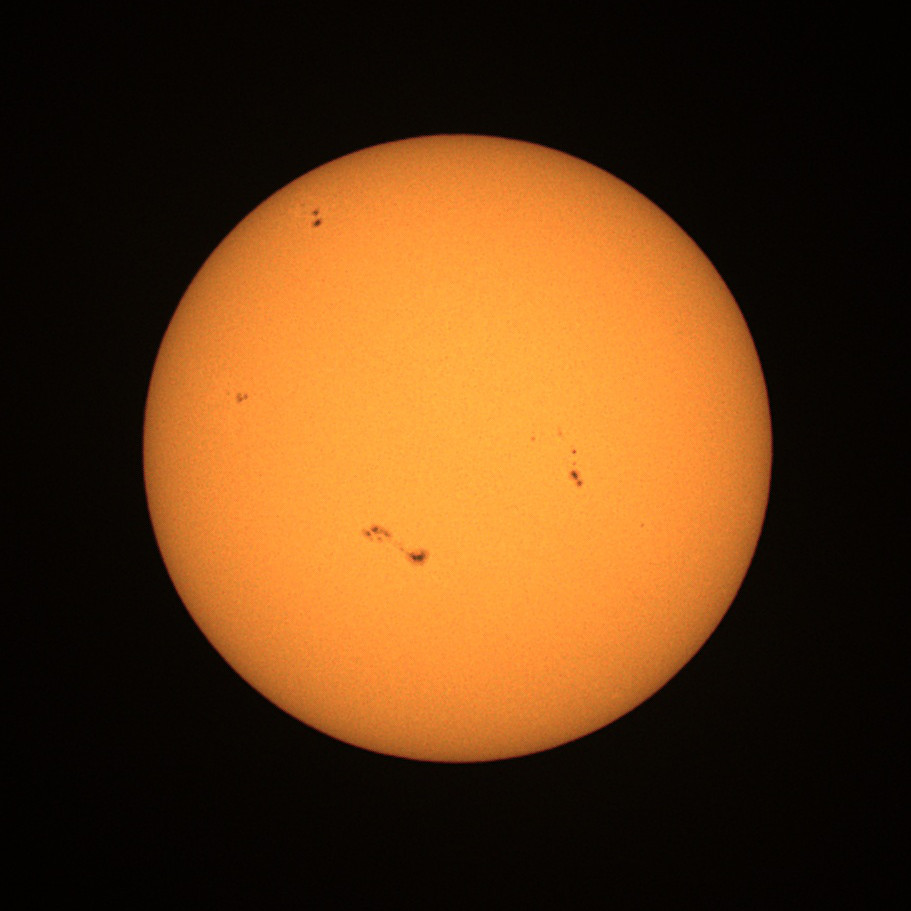 Image of the Sun showing sunspots captured with Vespera fitted with the solar filter.

The lifespan of a sunspot varies from a few days to several weeks. They follow the rotation of the Sun but also have their own movements across the surface. The aspect of the solar disk changes every day.
By carefully observing the biggest spots and groups of spots, you will notice that the very dark center of the spots (the umbra), is often surrounded by a halo that is not quite as dark (the penumbra).

Sunspots are cooler regions with a temperature of about 3500°C. They are the result of loops of particularly intense magnetic fields which “break” the photosphere and limit the renewal of matter coming from the underlying layers of the star.
The smallest spots are a few thousand kilometers across while the largest ones reach 50,000 kilometers in diameter. They are so large they could hold Earth several times over.

On the edge of the solar disk, near isolated or groups of spots, you may be able to observe brighter areas. These are faculae. The contrast between them and the rest of solar disk is not as strong, so they are much more difficult to observe than sunspots. They are only visible along the periphery due to the apparent darkening of the edges of the solar disk. The faculae are hotter magnetic regions (about 8000°C). They can be grouped into a very large range of faculae. On the image below, obtained by computer processing of images captured by Vespera, faculae are visible around the edge of the disk. 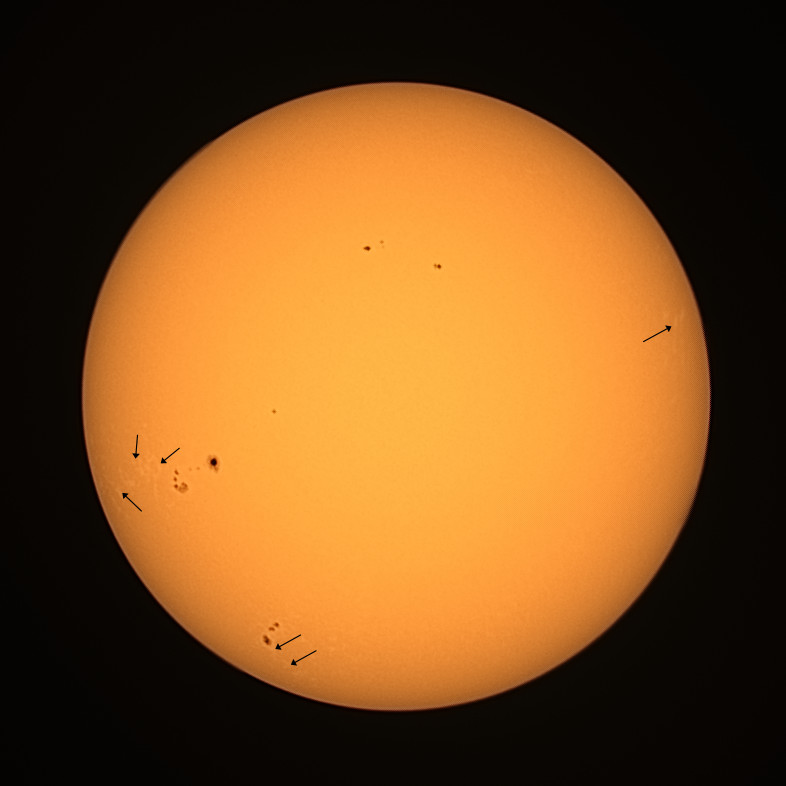 3. Observing and measuring the Sun’s activity with Vespera and Stellina

The number of sunspots at any given time is extremely variable and depends on the intensity of the solar activity. Over more than a century of observation, astronomers have noticed that the number of spots varies regularly according to a cycle of about 11 years. At the beginning of each cycle, the Sun is nearly devoid of sunspots. The number gradually increases to reach a maximum before decreasing again. The solar activity cycle is intimately linked to the dynamics of the Sun’s magnetic field. Thus with each cycle, the magnetic field reverses.

With Vespera and Stellina, you can regularly count the sunspots and thus monitor changes in the Sun’s activity. We are currently in the early stages of Solar Cycle 25 (counting from when recording such cycles began). The number of spots is still low but will gradually increase. This is a good time to start monitoring the cycle to see how it evolves. 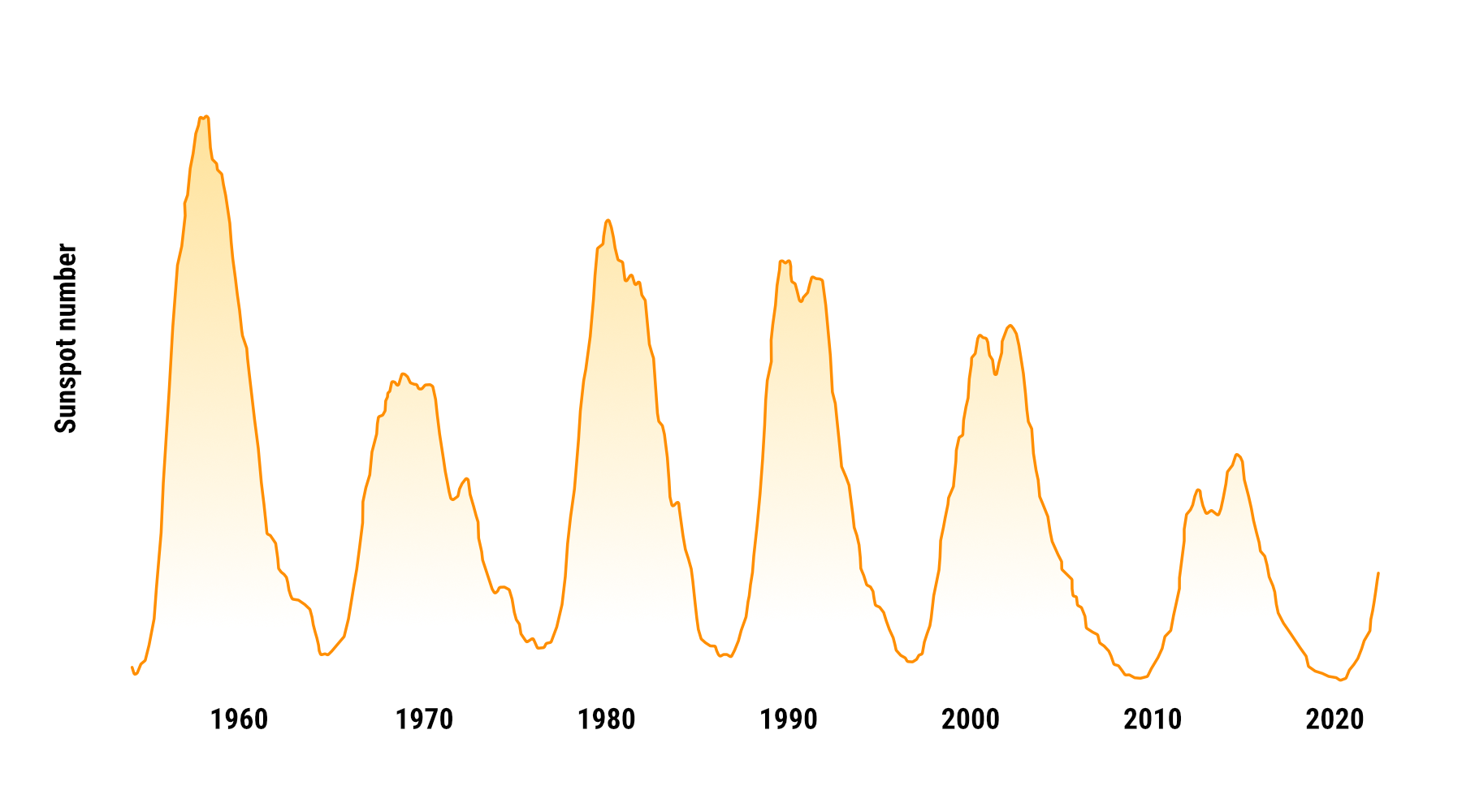 Changes in the number of sunspots. The pattern clearly shows a cycle of about 11 years.

Although we know how long the solar cycle is (even if it can vary by two or three years), it is much more difficult to predict the maximum intensity that each cycle will reach. Monitoring and comparing with previous cycles can provide clues.
The current cycle is expected to peak in the summer of 2025.

Method for measuring and monitoring the Sun’s activity.

If you begin a regular solar activity survey with Vespera or Stellina, it is important to use the same instrument the entire time. If you alternate between telescopes with different features, you will not see the sunspots with the same degree of accuracy, which will influence your count.
There is a fairly simple spot count method that provides a good indication of solar activity. It was developed in 1849 by Swiss astronomer Johann Rudolf Wolf and bears his name: the Wolf number. It is calculated using the following formula:

This is because depending on the sharpness of the image obtained, it can be difficult to distinguish small spots that are very close to each other. Similarly, the notion of group may seem ambiguous. What is important is to follow the same rules for counting over time. The Wolf number therefore depends on your means and methods of observation.

By making regular observations, you can see how sunspots evolve and which ones are actually part of the same group, since those in a group move together. 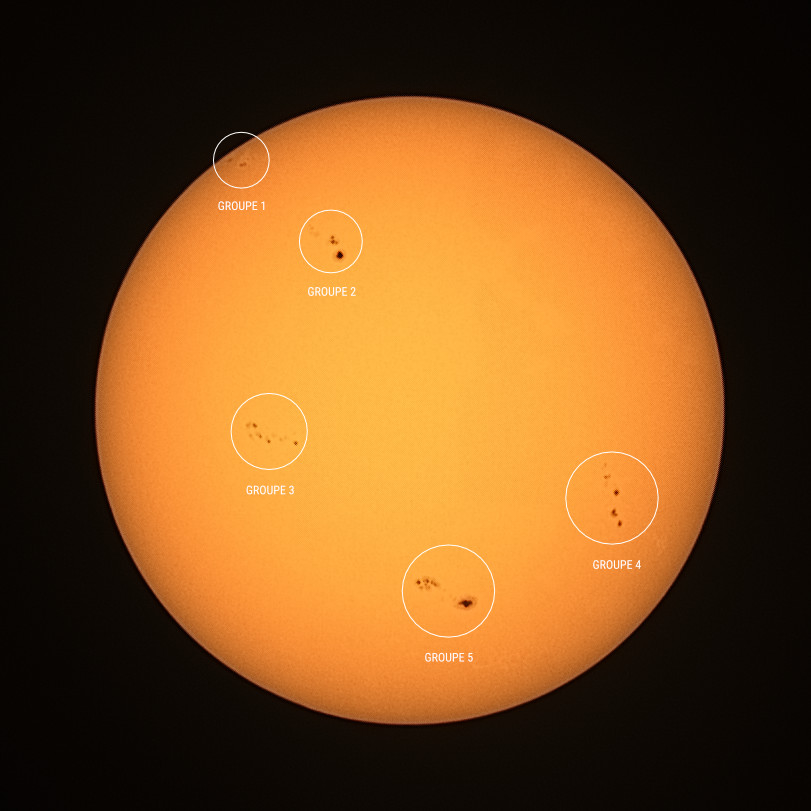 4. Observing and measuring the differential rotation of the Sun with Vespera and Stellina.

Sunspots are driven by the rotation of the Sun. Because they have a lifespan of several days, by capturing a new image of the Sun each day you can see their movement and measure the Sun’s rotation speed. The longest lasting sunspots can even be followed over several rotations.
The Sun does not have a solid surface and its rotation is not uniform. It is faster at the pole than at the equator. This is called a differential rotation. The sunspots closer to the poles thus cross the solar disk more quickly.
An interesting and amusing experiment consists in making an animation video of the Sun’s rotation and the changes in the spots using a set of images taken at regular intervals.
To do this, you will need to know the orientation of the axis of Sun’s rotation in relation to the image captured by Vespera or Stellina to align each image identically. This orientation depends on the date, time and place of your observation.
To determine this information, you might try using the “TiltingSun” software that can be downloaded at the following address: https://atoptics.co.uk/tiltsun.htm 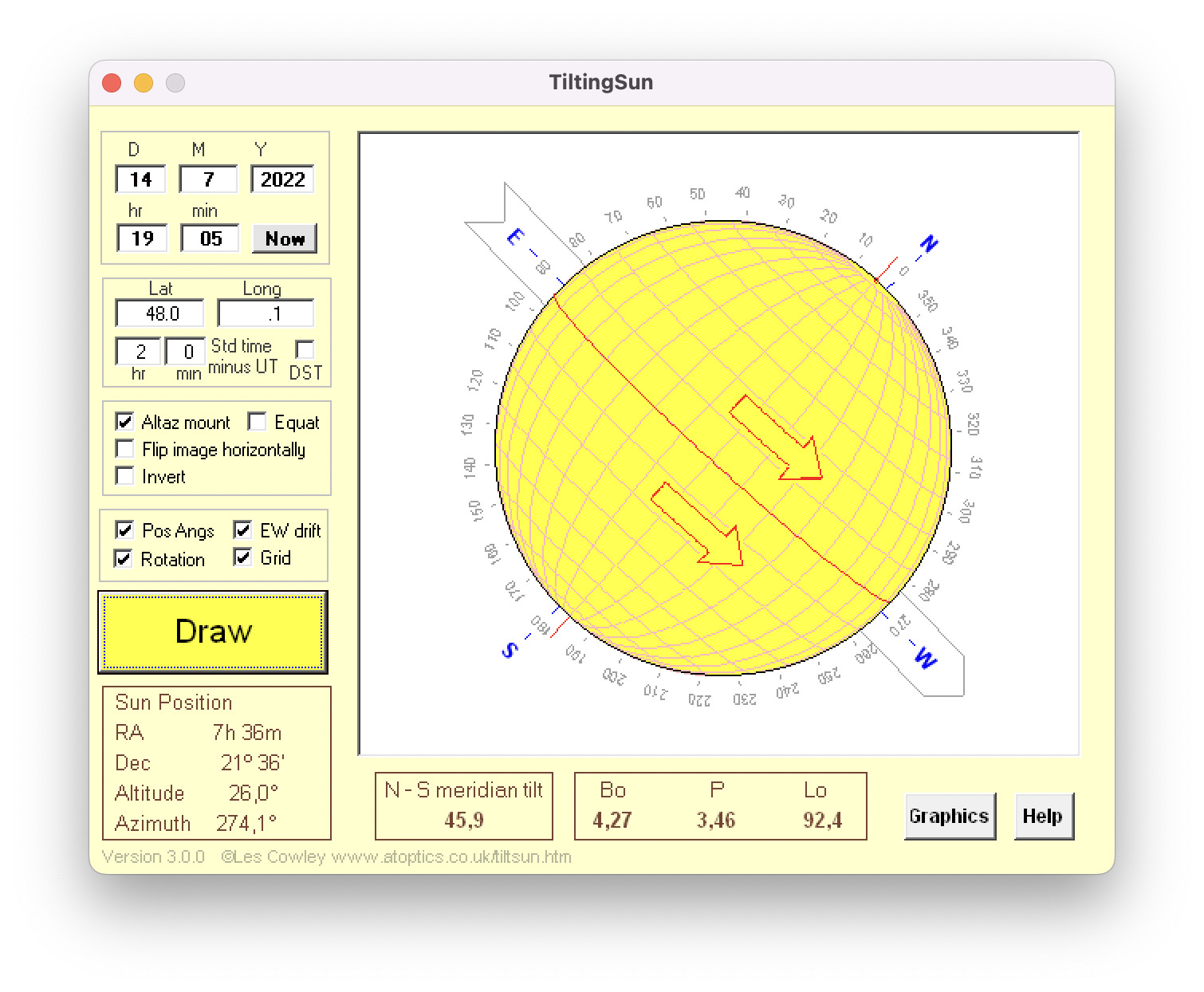 To locate sunspot positions, measure the Sun’s rotation or make an animation video, you will need to know the orientation of the Sun in the image.

5. How to start observing the Sun with Vespera and Stellina

To observe the Sun, you must use the solar filter (buy it here). Make sure you have the latest version of Singularity. Launch the app, select your observation location, and go to the Space Center to choose the “Solar Mode” function. Then follow the on-screen instructions.

After fitting the solar filter on your observation station, choose “Solar Pointing” from the Space Center tab.

Because solar observation is done during the day, there is no visible star that the observation stations can use to perform astrometry (detection of a star field that Vespera and Stellina can use to calibrate their position in the sky) and initialize, as is possible at night. This is why you should point your observation station as precisely as you can towards the Sun.
This is very easy to do by observing the shadow of the telescope on the ground. Turn your Vespera or Stellina manually on its base. The telescope is correctly aligned when the Sun’s rays pass through the gap between the arm and the body of the telescope and cut the shadow in half. The telescope then takes over and performs a scan to accurately point to the Sun and track it. 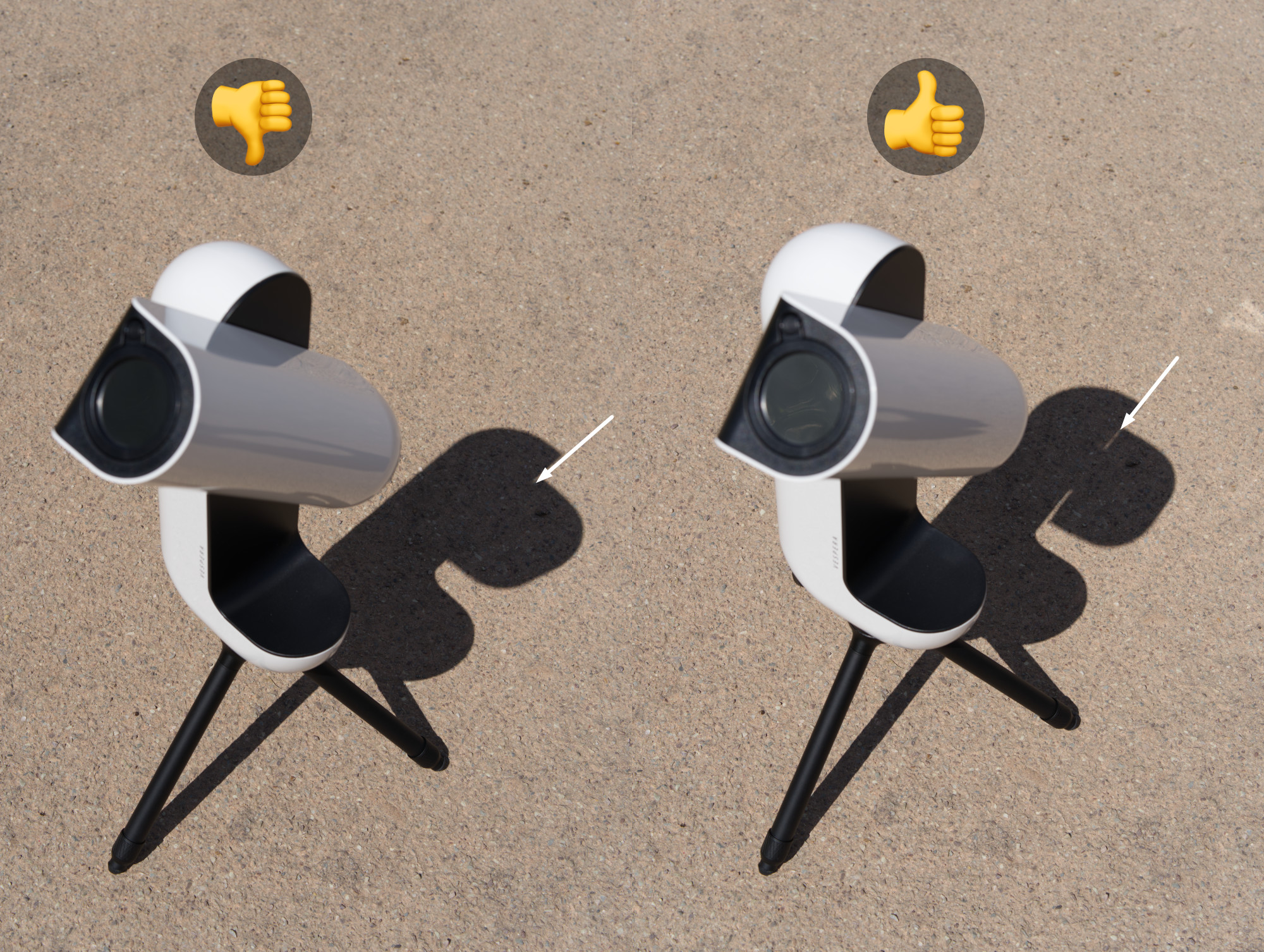 Left: Vespera is not properly aligned – Right: Sunlight passes through the gap between the arm and the body of Vespera; the telescope is correctly aligned.

Once the Sun is correctly targeted, Vespera proposes an image of it showing the relative size based on the different planets along with the stars that would be visible around the Sun if we could block out the daylight.
To retrieve an image for the various experiments mentioned above, choose the “raw image” of the Sun. 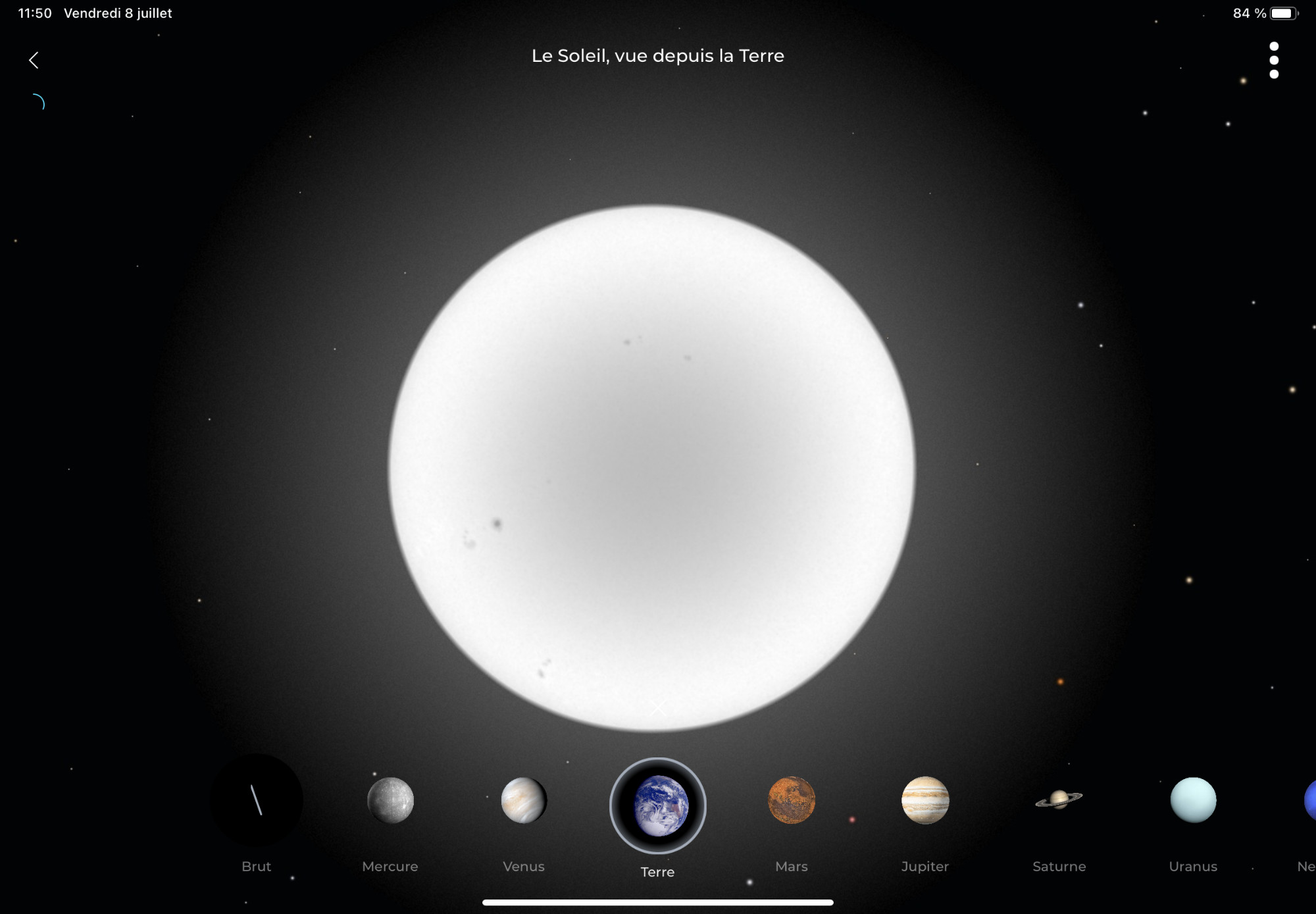 Choose to observe the Sun as if you were on another planet in the solar system or choose the raw image to perform various experiments on sunspots and the Sun’s rotation.

Never observe the Sun directly through an optical instrument that is not equipped with a specific protective filter. Never point Vespera or Stellina towards the Sun if your observation station is not fitted with a Vaonis filter.