Top Astronomy Events for May 2022

May sees a fine gathering of dawn planets, a trio of possible meteor outbursts and a spectacular total lunar eclipse. 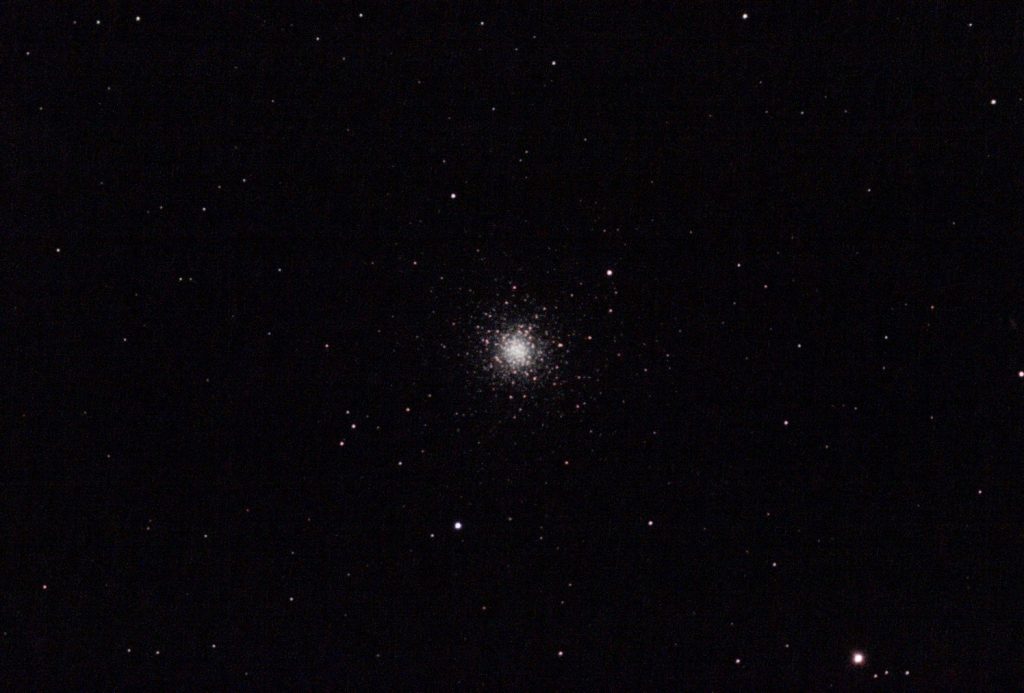 Messier 3, one of the fine globular clusters of May. Credit: Stellina/Dave Dickinson

After a long dry spell, the astronomical action returns to the night sky in the month of May. Eclipse season is also underway in May, bookended by a spectacular total lunar eclipse on May 16th. Meanwhile, planets string the dawn sky, along with the chance for several rare meteor outbursts… looking farther afield, the May sky means one thing for deep sky observers: the promise of galaxies.

May evenings in the northern hemisphere sees us looking square off into the distance at the equinoctial point in Virgo, the spot that the Sun will occupy in September. With the galactic plane safely out of view, you almost can’t miss finding a galaxy no matter where you plop your field of view down in the Bowl of Virgo asterism. These distant ‘island universes’ spill out to the adjacent constellations of Coma Berenices, Leo and Ursa Major. 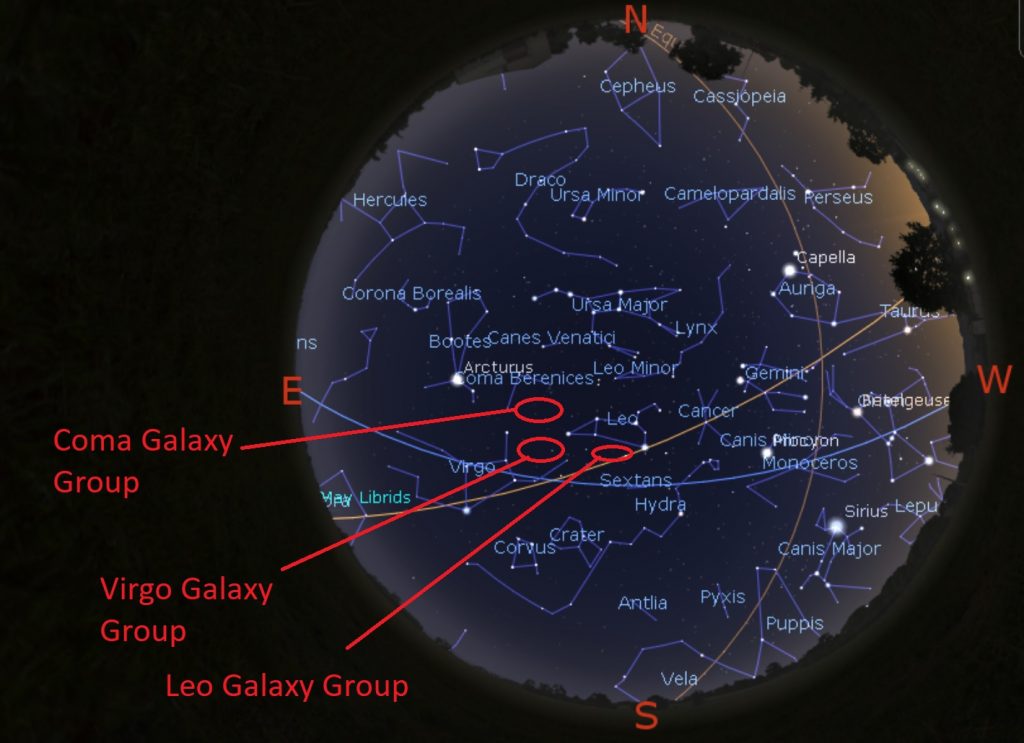 In the southern hemisphere, May sees the familiar iconic sights of the Southern Cross (Crux), the Large and Small Magellanic Clouds and Alpha Centauri all ride high at dusk. A northern visitor ‘down under’ can pick off nearly all of the vaunted ‘life list’ southern items, in one evening view. The galactic plane also transects the scene, bringing with it Scorpius and the promise of the brilliant dust shrouded galactic core.

Fun fact: Uranus and Neptune have each only been visited once: by the Voyager 2 mission in 1986 and 1989, respectively. The 2022 Planetary Decadal Survey calls for NASA to send a dedicated ‘ice giant’ mission to Uranus in the next decade, arriving in 2042.

The Moon, fresh off of late April’s partial solar eclipse, heads towards one of the most spectacular big ticket events for 2022: a total lunar eclipse visible from the Americas and a good portion of western Europe and Africa. Totality for this eclipse spans a generous 85 minutes in duration, during which time the Earthward face of the Moon will take on the ruddy hue of a thousand sunsets filtered through the Earth’s atmosphere. 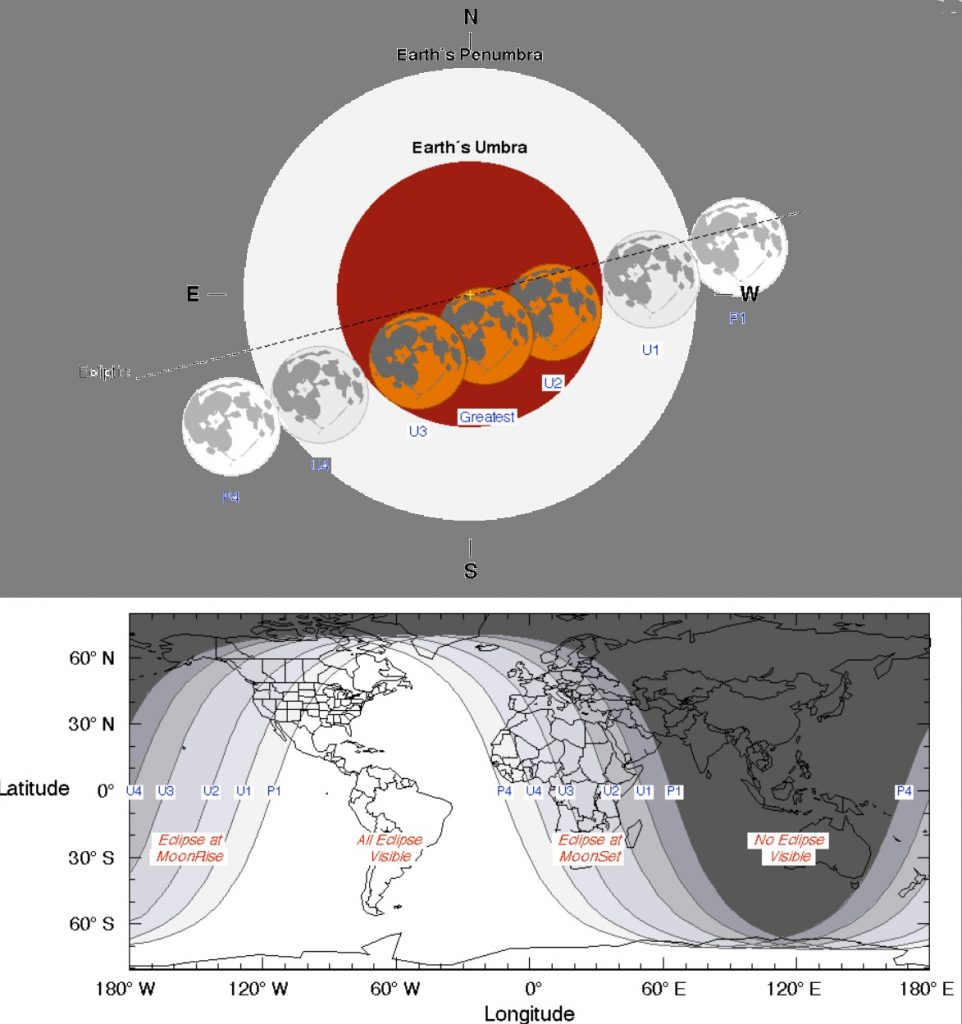 The planetary rundown in May 2022: You have to get up early in May to catch the naked eye planets… though the view is worth the effort.

The waning crescent Moon pairs with Venus on the morning of May 27th. The Moon also occults (passes in front of) Venus on the same date. And though the actual event occurs over a remote swath of the southern Indian Ocean, you can still try your hand at the feat of visual athletics of seeing Venus in the daytime, using the nearby crescent Moon as a handy guide. 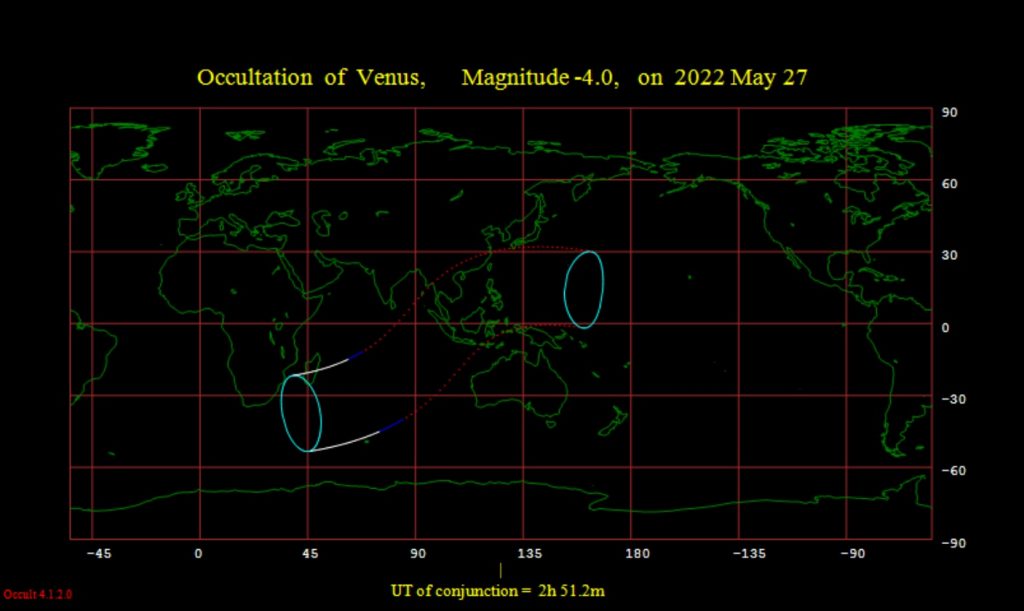 The occultation footprint for the May 27th Venus event. Credit: Occult 4.2.

Starting on May 29th, the naked eye planets of Venus, Mars, Jupiter and Saturn are in naked eye order at dawn… with Mercury joining the lineup in early June. 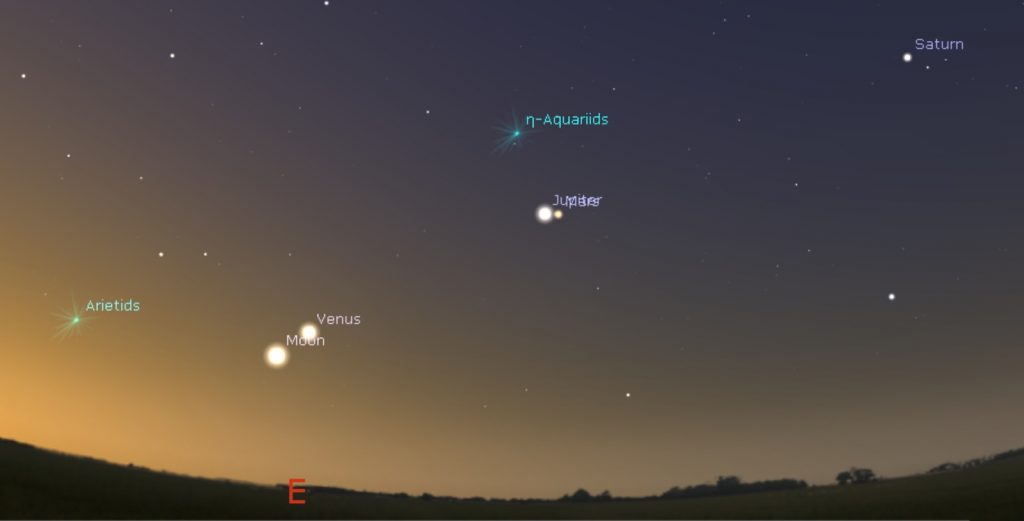 The sky lineup on May 27th at dawn, looking eastward. Credit: Stellarium.

May meteors: The month of May could host no less than three (!) wildcard meteor showers:

-First up on May 15th, watch for a possible outburst from the constellation of Hercules, courtesy of the minor planet 2006 GY2.

-Then, on May 25th, watch for a possible uptick in meteors from periodic comet 2009P/LINEAR. In 2022, We pass close to trails from the comet seeded in 1903 and 1909, so we may see an increase in meteor activity this year… the radiant lies in the constellation of Camelopardalis. ‘Cameloparalid Meteors,’ anyone?

-Finally, we pass close to the trail of periodic Comet 73P/Schwassmann-Wachmann 3 on May 31st, which could induce yet another possible meteor storm. The comet had a major breakup observed in 1995, which could have produced a major new crop of meteor-producing dust. The comet is the source of the usually obscure Tau Herculids, the radiant of which has actually wandered into the neighboring constellation of Boötes. 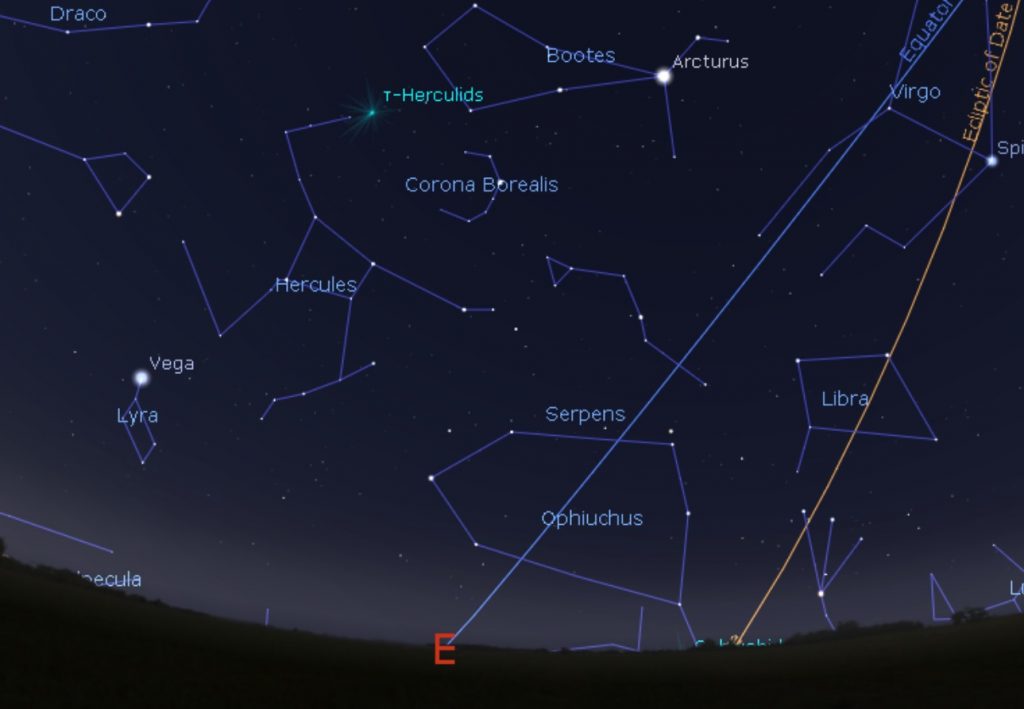 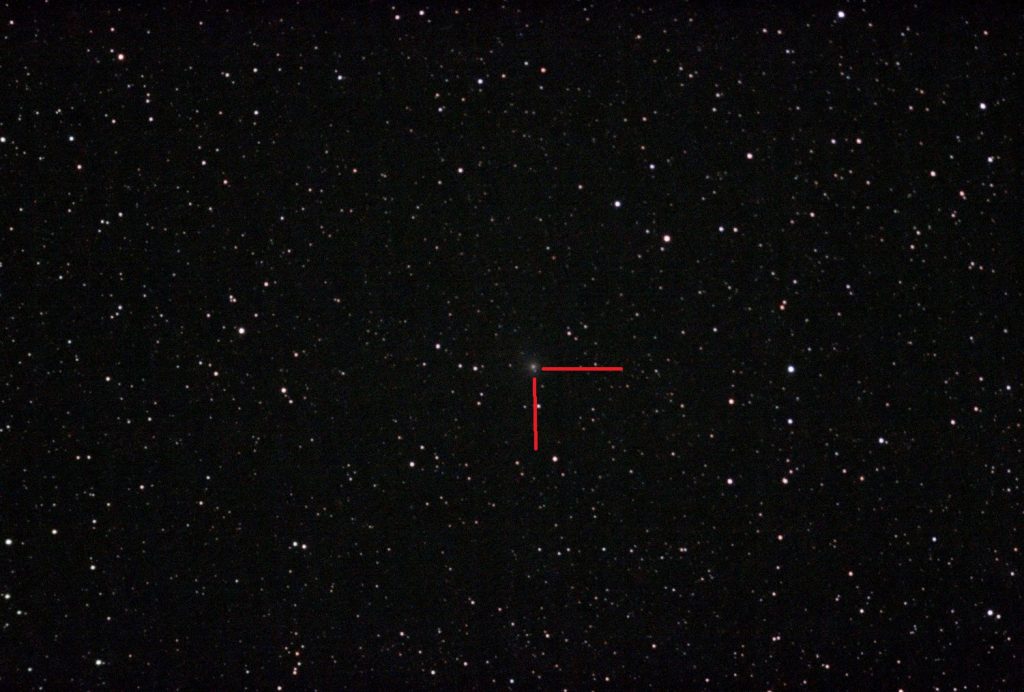 Deep Sky highlight (northern hemisphere) – Globs of galaxies: as we mentioned previously, May means galaxy season. One of our faves is the face-on whirlpool spiral Messier 51 in the constellation Canes Venatici. I always know just where to find it, two degrees from the naked eye +2nd magnitude star Alkaid (Eta Ursae Majoris) in the handle of the Big Dipper asterism. Coma Berenices also hosts a slew of galaxies, crowned with the +8.5 magnitude M64. The Leo Triplet is also a fine grouping, consisting of M105, M95, and M96, all in a one degree field of view. Finally, be sure to check out Messier 60 in the Bowl of Virgo at 55 million light-years distant, as it currently hosts a +13th magnitude supernova, the (confusingly named) SN2022hrs. 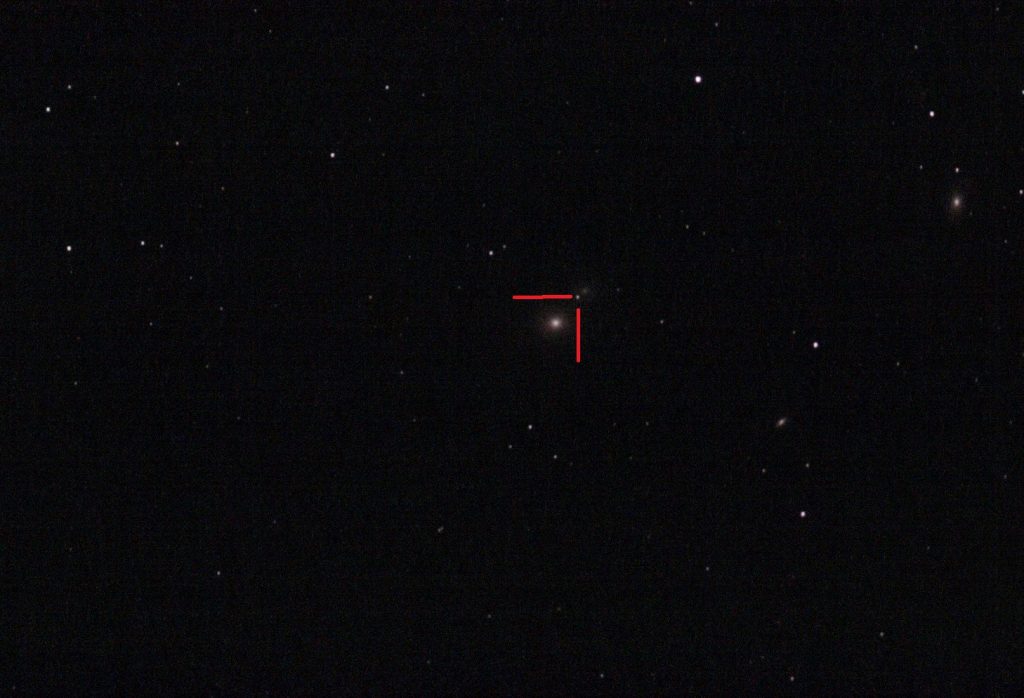 Deep Sky highlight (southern hemisphere) – Eta Carina – Also known as the Homunculus Nebula, this amazing nebula complex in the constellation Carina rides high in southern sky on May evenings. In the mid-19th century, this region hosted a star that—for a brief time—shown brighter than Sirius. Today, we know that the twin-lobed Homunculus hosts a massive pair of stars in a death embrace, 250 and 80 times the mass of our puny Sun, respectively. You can easily pick up the larger Carina Nebula (NGC 3372) with binoculars, then scan the core along with the nearby open cluster Trumpler 16. 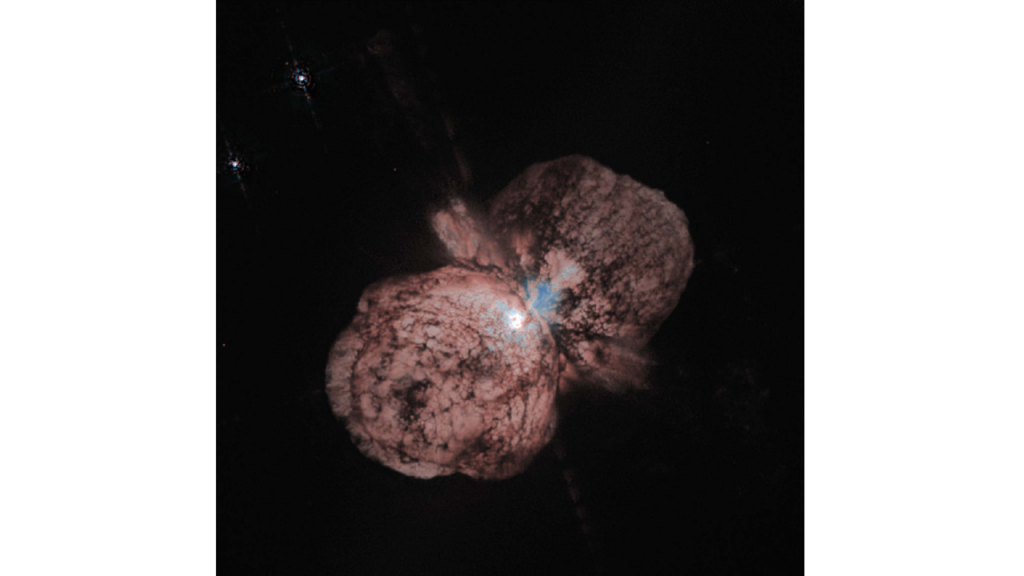 Challenge object (northern hemisphere) – Seeing southern objects… from up north. It’s a little known fact. Did you know that you can actually see many of those iconic southern southern sky objects… from up north? Early May around midnight is a good time to try. The best is Omega Centauri, low to the south at local midnight… and keep an eye out for Beta Crucis (the very top of the Southern Cross) visible from Florida latitudes in May.

Top Astronomy Events for May 2022