April astronomy sees the bright stars of winter set at dusk, with the promise of galaxies rising in the east.

The month of April sees the first full month of Spring in the northern hemisphere, and Fall in the southern. Though nights are getting ever shorter up north, the length of daytime versus night is still fairly equal across both hemispheres.

Also, keep an eye out for aurora from mid- to high latitudes in April as we come off of equinox season; the Sun just kicked off as Earthward X1 class flare yesterday, and Solar Cycle #25 is now in full swing.

April evenings in the northern hemisphere sees a sky in transition, with the familiar winter Hexagon asterism setting to the west, as galaxy groups across Virgo, Coma Berenices and Ursa Major rise in the east. You almost can’t help but run into a galaxy while scanning across the Bowl of Virgo asterism. Brilliant Arcturus punctuates the scene, an interloper from the distant galactic halo that just happens to be visiting our galactic neighborhood in the current epoch, at just 37 light-years distant.

In the southern hemisphere, the April evening sky is adorned with the photogenic span from Sirius and Canopus in the west, with Crux and the iconic Coal Sack nebula high at the zenith, and Alpha Centauri towards the west. The S-shape of Scorpius is also rising, bringing with it the promise of the Summer constellations located towards the core of the galaxy in Sagittarius.

Every April sees the reenactment of the death of the great hunter Orion from Greek mythology, as he fades in the twilight as his nemesis Scorpius the Scorpion rises in the east.

Fun fact: The spring sky may be littered with galaxies, but all is not what it seems. A suborbital mission named CIBER (the Cosmic Infrared background Experiment) looked at the glow of the cosmic optical background in 2012 and revealed an amazing fact: there are actually more stars in the universe that are free-roaming, versus stars associated with galaxies.

The Moon reaches New right out the gate on April 1st, and again at the very end of the month on April 30th. The makes April a ‘Black Moon’ month, in the sense of a calendar month containing two New Moons. This weekend’s New Moon is also a prime time to ‘run’ a Messier Marathon, a chance to spy all 110 objects in Charles Messier’s catalog in one night. Finally, the sighting of the slim crescent Moon at dusk on the evening of April 2nd will mark the start of the Muslim month of Ramadan, a time of daytime fasting, followed by celebration at the breaking of the fast at the end of dusk each night.

The Moon also partially eclipses the Sun for the very southern tip of South America of April 30th, marking the start of the first eclipse season for 2022. 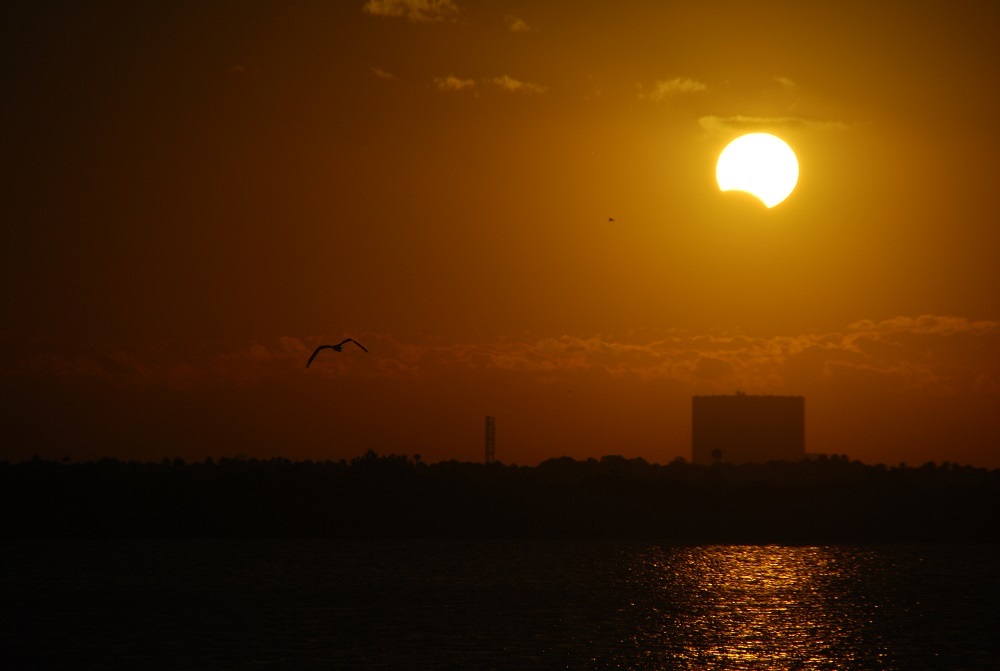 The partially eclipsed Sun rising over the Vehicle Assembly Building at the Kennedy Space Center in Florida. Credit: Dave Dickinson

The planetary rundown in April astronomy 2022: You have to get up early in March to catch the naked eye planets, as Mars, Venus, Saturn and now Jupiter all linger in the early dawn. Only speedy Mercury is absent from the dawn scene when it comes to naked eye planets. Two planetary conjunctions of note transpire at the very end of April: faint +8th magnitude Neptune passes just 8” from brilliant Venus on March 27th (narrowly missing occultation), and Jupiter and Venus pair up 12’ apart on the morning of April 30th. 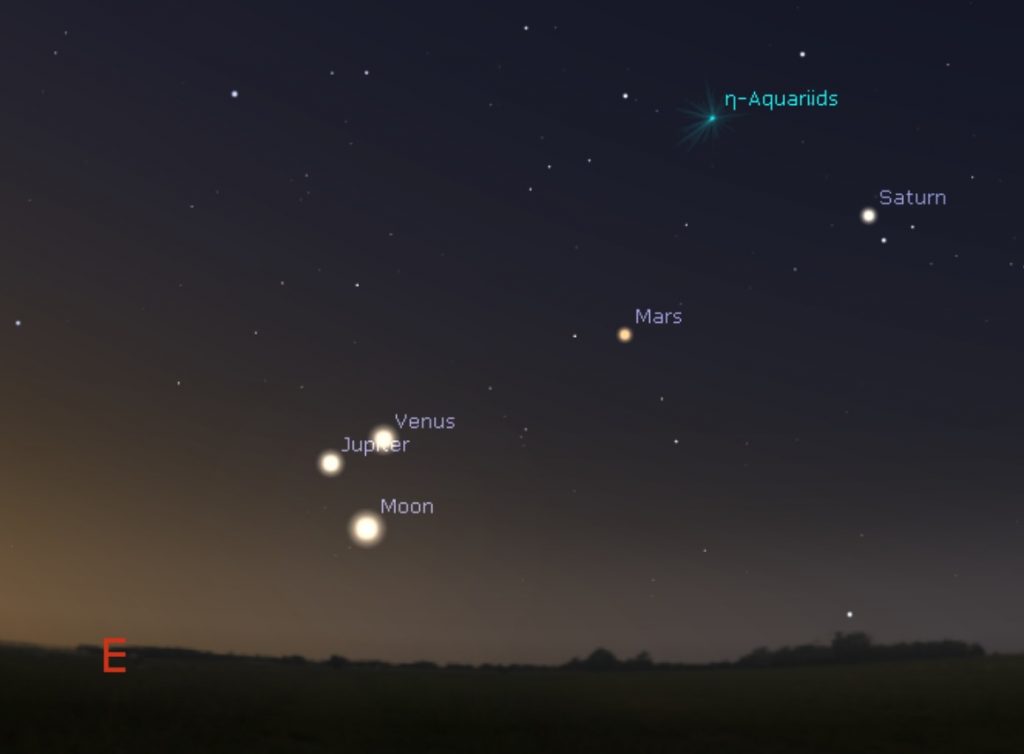 The dawn sky on the morning of April 27th. Credit: Stellarium.

April astronomy: meteors – The April Lyrids are one of the very few Spring meteor showers worth watching for. Hailing from comet C/1861 G1 Thatcher, the shower radiates from a point very near the bright star Vega in the constellation Lyra. In 2022, expect a maximum Zenithal Hourly Rate of ~15 Lyrids per hour around the morning of April 23rd.

Comets: While there’s no ‘big ticket’ comet out there in April, we do have a spate of +10th magnitude fuzzballs for dusk observers in the northern hemisphere: 19/P Borrelly in Aries, C/2019 L3 ATLAS in Gemini, and 104P/Kowal in Taurus. 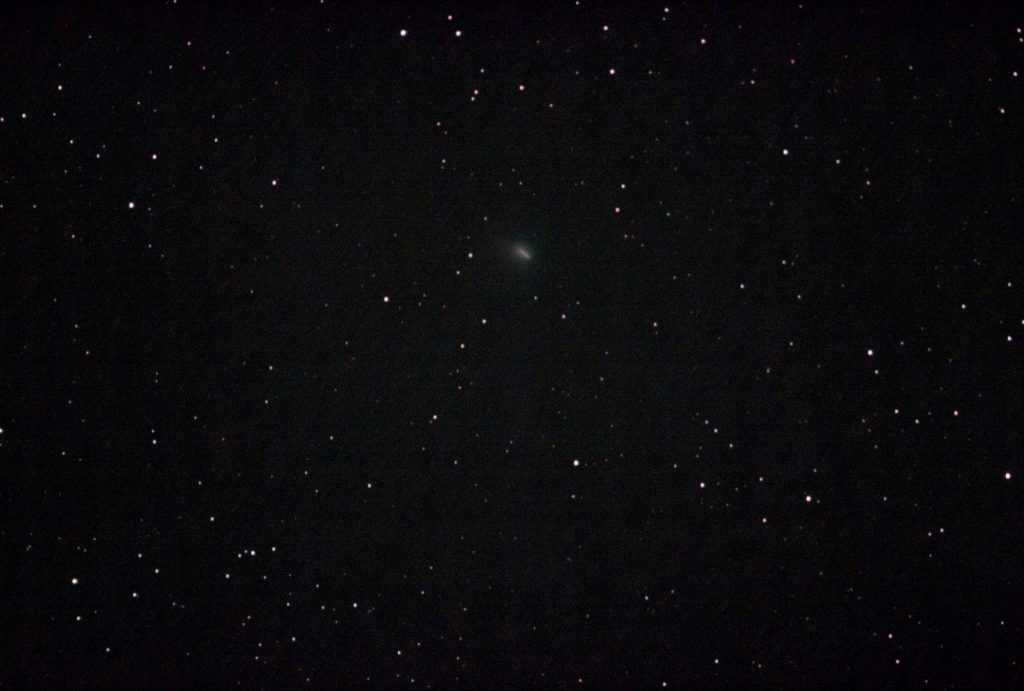 Deep Sky highlight (northern hemisphere) – M1 The Crab Nebula – The very first object in Messier’s classic deep sky catalog is also one of the most intriguing. Messier 1 was the site of the famous ‘daytime star’ noted by Chinese astronomers in 1056 AD, a brilliant supernova which resulted in the nebula remnant and pulsar relic. M1 is within a degree of the +3rd magnitude star Zeta Tauri, an easy sweep through Taurus on dusk evenings. 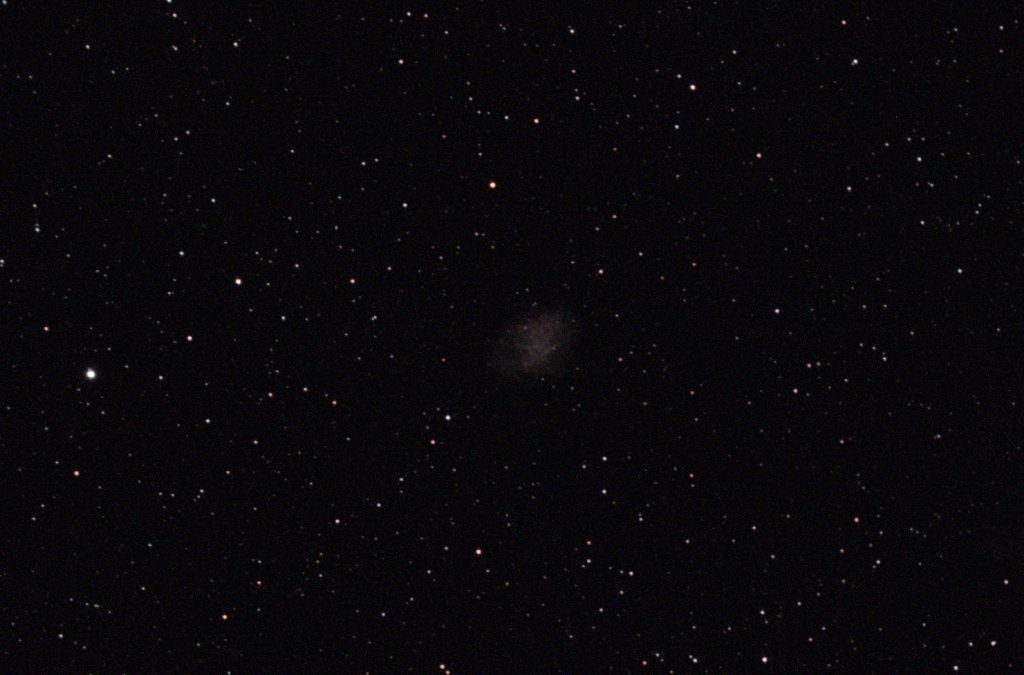 The Crab Nebula (Messier 1) in the constellation Taurus, captured with a Vaonis/Stellina telescope.

The globular cluster Messier 79 in Lepus, captured with a Vaonis/Stellina telescope.

Challenge object (northern hemisphere) – NGC 2419 The Intergalactic Wanderer – Wanna see something really obscure? A distant star cluster in the constellation of the Lynx may take the cake. NGC 2419 is often referred to as the ‘Intergalactic Wanderer,’ owing to its estimated distance of about 300 kilo-light-years. Is it gravitationally bound to the Milky Way, or truly free ranging the Universe? NGC 2419 spans 5’ and shines at magnitude +9. Just imagine the view from the cluster, looking back at the glorious Milky Way!

Challenge Object (Southern Hemisphere) – NGC 2997 Galaxy in Antlia – it’s often said that all of the good galaxies are located up north… but one galaxy that defies this trend is located in the southern constellation of Antlia the Air Pump. NGC 2997 is a fine +9th magnitude face-on spiral galaxy, located nine degrees west of the star Alpha Antliae. NGC 2997 is located about 45 million light-years distant. 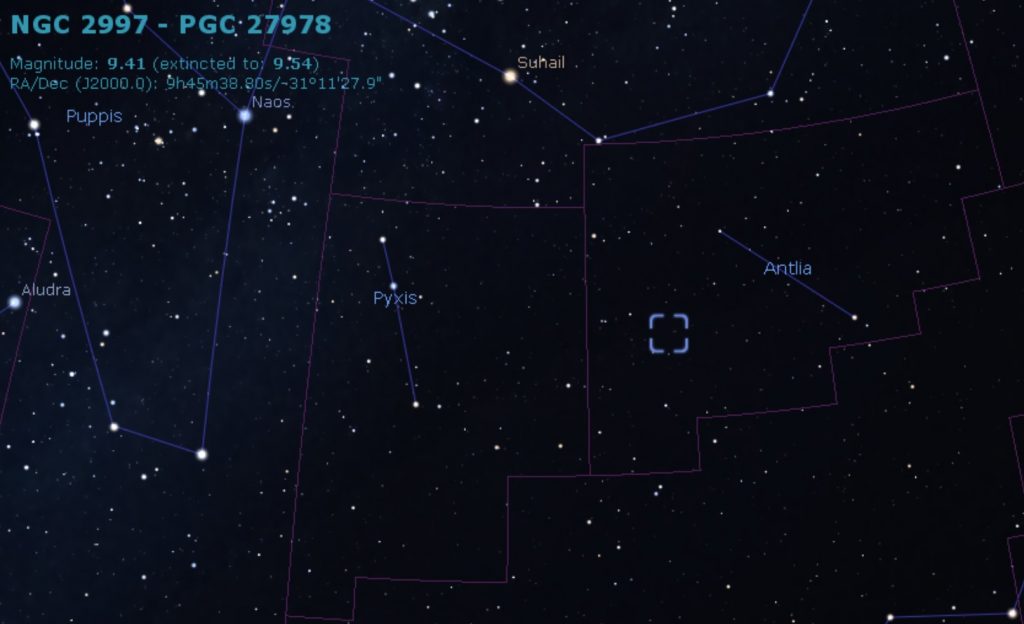