What can we observe in the sky in November?

Vaonis > Observations > What can we observe in the sky in November?

What can we observe in the sky in November? The end of the year will be rich in observations of the sky and this month of November is already starting with a total lunar eclipse, visible on the west coast of the United States, Australia and East Asia, in particular.

Ceres passes through the Leo triplet between November 6th & 7th

Between November 6th & 7th, the dwarf planet Ceres will pass through the Leo Triplet in the sky. This will obviously be a visual effect in our sky because the smallest dwarf planet in the solar system with a size of 950 km is only about 400 million kilometers away from us while the M65, M66 and Hamburger galaxies are 35 million light years away.

After the partial eclipse of the Sun on October 25th, the Sun, the Earth and the Moon will play together again to offer us a new event in the sky. This time, the alignment of the 3 objects will be different because the Earth will be in the middle of the trio. The Moon will be totally in the shadow of the Earth and will not perceive the light of the Sun during this total lunar eclipse. The phenomenon will be visible everywhere where it will be dark on November 8 between 09:10 and 12:49 UTC, mainly the Americas, Asia and Oceania.

Uranus in opposition on November 9th

The seventh planet of the solar system will be at opposition on November 9th. The ice giant planet will be located a few degrees from the full Moon. In eastern Asia and Alaska, the opposition of the planet will be accompanied by an occultation by the Moon the day before. 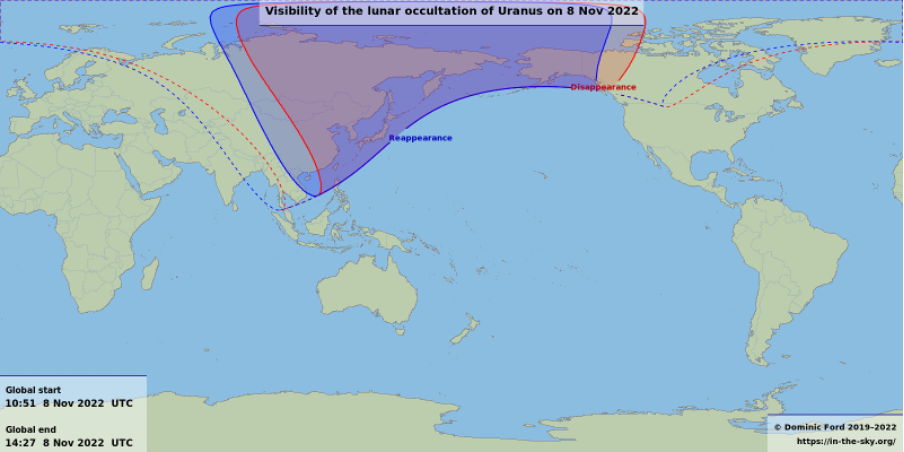 During the month of November, the Earth passes through the residues left by the comet Tempel-Tuttle. About 10 tons of debris weighing less than a gram for sizes smaller than10mm come to burn in our atmosphere.

On the night of November 18, this Leonids shooting star shower will reach its maximum activity. In the direction of the constellation Leo, about 15 meteors per hour should be visible.

Trivia : The comet officially referenced as 55P/Tempel-Tuttle, was discovered independently by astronomers Ernest Tempel on December 19, 1865 and Horace Parnell Tuttle on January 6, 1866. It has a period of 33 years. Its latest passage to the Sun was on February 28, 1998 and its next one is scheduled for May 20, 2031, according to its current trajectory.

M45, the Pleiades well placed in the sky

During the night of November 18, the 7 sisters of the Pleiades and their parents Atlas and Pleioné will reach their highest point in the night sky. The open cluster will be in optimal conditions to be observed. In the sky, following the imaginary line formed by the stars Sirius, Orion’s belt and Aldebaran, you will discover a small group of 5 bright stars. After some time of adaptation, your eye should distinguish a little more and in excellent conditions of observation and with a good view, you should distinguish 12 of them. Using your instrument and the beta version of Singularity’s Mosaic mode, you should be able to detect a few dozen stars among the thousand objects contained in the open cluster. 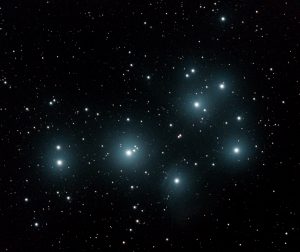