Noctilucent clouds are beyond the shadow of a doubt the rarest and most mysterious we can observe from Earth. They are even less likely to be seen than northern lights ! But, in contrast to aurorae, these night shining clouds can be observed from more countries across Europe !

What is their origin ? How can we observe them ? How to photograph them ? All these answers could be found in this Noctilucent Clouds Guide !

What a overwhelming show observing these clouds, still not very known by the general public today. Displaying a bright blue color and evolving in the dusk sky like waves, the noctilucent clouds show up each year around the summer solstice only. Filaments, undulations, spirals, veils… are the random and unique shapes that they can take. 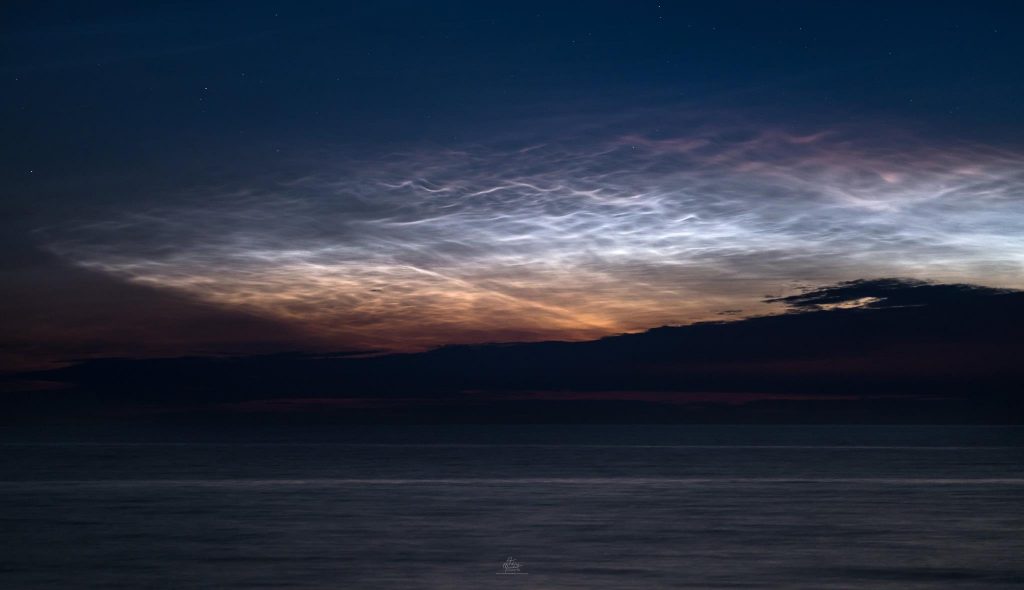 Noctilucent clouds are easily recognizable with their white or bluish undulations. Picture taken by Adrien Mauduit.

When we look at them, it is not surprising to notice that the original English noun “Noctilucent Clouds (NLCs)” means “Night Shining Clouds“. As we will explain it later on, they do not emit any light but do reflect sunlight.

Although they use the word ‘clouds’, NLCs do not have to be misunderstood with common clouds for which we are very familiar with. The famous cumulus, stratus, cumulonimbus, cirrus…etc are part of the atmospheric layer called Troposphere, which rises up to 20 kilometers above sea level. The noctilucent clouds are formed at a specific narrow-range altitude only, which is also far higher : approximately 83 kilometers above the Earth, in the so called mesosphere atmospheric layer, where temperature can reach -100°C.

Moreover, the mesospheric layer is where small meteoroids burnt up in the atmosphere, triggering the phenomenon we all know as shooting stars.

The origin of noctilucent clouds is indeed simultaneously atmospheric and astronomical.
Firstly, every clouds formation requires water molecules floating in the atmosphere. However, at more than 80 kilometers altitude, the temperature is not suitable to form liquid water or water vapor. Therefore, the only presence of water in the mesosphere is ice and comes from the North and South Poles.

In order for these ice crystals to be formed, it is necessary that other matter particles should exist to serve as holders (air, dust…). Shooting stars should be introduced now !

Scientists have recently discovered that ice crystals located in the mesosphere were composed of thin particles released during the ionization of meteors, composing NLCs. The size of these interstellar dusts does not exceed 10 nanometers of diameter, namely 0.000010 millimeters.

These weird clouds are thus extremely thin like smoke produced by cigarettes. One question still worth to be asked : Why can they be visible ?

Why are they visible ? 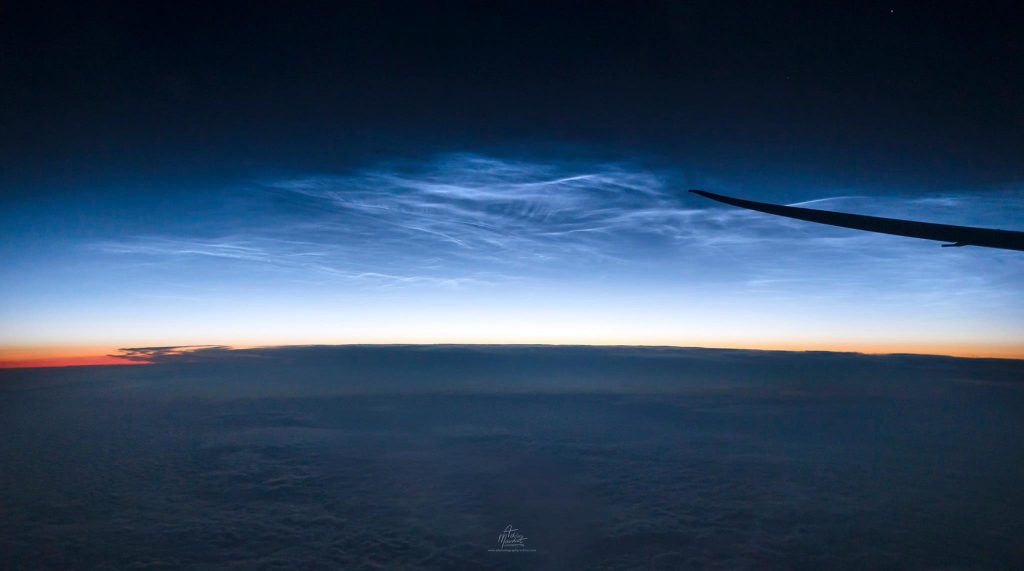 Noctilucent clouds hang at 80 km altitude against 20 km for regular tropospheric clouds. This aerial view was taken by Adrien Mauduit in a plane flying over the polar region.

Only located above the North (or South) pole, noctilucent clouds can be observed by sunlight reflection. For a terrestrial observer, the sun should be setting or rising around the North horizon and stay under the horizon in order for its light to be reflected from under, towards the clouds. At this moment, the common clouds are in shade of the Earth, this is why we can easily distinguish regular clouds to noctilucent clouds which seems to be illuminated.

Typically, the sun must be located at 11° elevation below the horizon. The period of the Year where the Sun shows this particular configuration is around the summer solstice. While in other seasons, the sun is getting much lower under the horizon and not very close to the North horizon.

The sun position is not the only condition which makes the noctilucent clouds observable. The mesosphere is indeed not always cooled down at -100°C. Paradoxically, this extreme temperature is reached only in summer, allowing ice crystals to be formed, and so the NLCs.

How to observe and to photograph Noctilucent Clouds ?

What makes noctilucent clouds mysterious is their unpredictable appearance. Moreover, they can not be seen from anywhere on the Earth, since they form only above the poles (north or south). You should be located next to the polar regions, otherwise the clouds will be too low from horizon or even below it.

As a whole, the latitude of observation of noctilucent clouds varies between 45° (~center of France) and 65° North (~Island). The visibility period spreads from the end of May to the beginning of August, every year.

The more you are located in the North, the higher the probability of observing these spectacular clouds will be. Typically, a location like Normandy (France) or the North of France are particularly interesting. British, Danish, Scandinavian or Canadian people are far more lucky because they have the opportunity to seat at the foreground !

However, previous years have reached records in NLC intensity and observation frequency. For example, they could be observed from lower latitude like French Alps, French Pyrenneans and even Corsica !
Eventually, from anywhere in France or in Europe (latitude higher than 48° North), you should be able to witness at least one display of these beautiful night shining clouds !

Where and When observing ?

Noctilucent clouds occur whether after sunset or before sunrise. Since they are visible thanks to the reflection of sunlight, it is mandatory that the sun, these clouds and the observer should be aligned in this order. This why they always appear above the horizon where the sun set or is about to rise.

Basically, the direction where we should look for them is over the West-North-West horizon (after sunset) or East-North-East (before sunrise). Then, wait at least one hour and a half after sunset before hoping to see NLCs. In the opposite way, if you want to observe them early in the morning, you will have to get up at least one hour and a half before sunrise, this being the upper limit. (two or three hours earlier is safer!)
Of course, NLCs are not visible every single nights ! Do not forget that they are rare.

Given their very low light intensity, it often becomes more beneficial to see these clouds through pictures rather than to the naked eye. It is recommended to use a digital camera (DSLR-like) in order to detect the faintest details. Here is the minimum gear required :

Before taking pictures, do not forget to adjust the focus manually to infinity.
There are no universal settings to capture NLCs because lighting conditions are always changing according to your location and according to the intensity of these clouds.

To give you some advice in choosing the right settings, we can use few general rules. It is better to increase the ISO sensitivity rather than the exposure time. Indeed, polar clouds are rapidly evolving and a too long integration time will not allow to see the smallest details in their structures.

The picture above is the outcome we can obtain using those settings : 50 mm lens, 6 seconds exposure time, f/2.2 aperture, 400 ISO sensitivity.

Eventually, the most efficient and useful tip to manage your photo is to carry out several series of tests, using different settings.

To close this Noctilucent Clouds guide, there is nothing more mind-blowing than this video recorded by astrophotographer Adrien Mauduit. He is certainly the greatest NLC hunter in the world and collaborated on a project of studying the mesosphere in Canada, involving several future astronauts. The following footage are likely to be the most detailed views of these polar clouds as seen from the ground.