New Comet ATLAS May Have Been an Old Visitor

Seen in 2019, Comet Y4 ATLAS may have solved a 19th century enigma… and started a new mystery.

In a clockwork universe, comets are the great wildcard, often appearing seemingly out of nowhere from the depths of the outer solar system.

Now, a new study links a recent comet with a breakup that may have occurred five millennia ago. The study out of the University of Maryland was published recently in The Astronomical Journal on July 21, 2021.

The story begins with the discovery of Comet C/2019 Y4 ATLAS on the night of December 28, 2019 by the Asteroid Terrestrial-impact Last Alert System (ATLAS) automated sky survey in Hawai’i. ATLAS typically picks up a dozen-odd long period comets a year, most of which never reach naked eye brightness.

But Y4 ATLAS was different. The inbound comet was set to pass 0.77 Astronomical Units (AU) or 116 million kilometers from the Earth on May 23, 2020, and reach naked eye visibility at magnitude 0. As with so many comets however, said apparition never came to pass, as Comet Y4 ATLAS began to disintegrate on April 20th, shattering into 30 separate fragments. The Hubble Space Telescope was on hand to witness the disintegration, reminiscent to the string of comets from Shoemaker-Levy 9 that smacked Jupiter back in 1994.

Now, it’s not uncommon for a dynamically new comet to disintegrate as it nears the warmth of the Sun for the first time. What did grab astronomer’s attention was the similarity of the orbital trace of Y4 ATLAS with another famous visitor: the Great Comet of 1844. This southern hemisphere comet was spotted from the Cape of Good Hope in early December 1844, and remained a naked eye object through the first half of 1845. Astronomer Maik Meyer first noticed the similarity between the two, leading astronomer Quanzhi Ye to hypothesize in the study that the two were fragments of a larger progenitor comet that broke apart around 5,000 years ago. And if the event occurred near perihelion—a prime time for comets to fall apart as they approach the Sun (remember comet ISON back in 2013?)—then our ancestors might have had quite a sky show, sometime back around ~3,000 BCE.

“If it broke up this far from the Sun, how did it survive the last passage around the Sun 5,000 years ago?” Says Ye in a recent press release. “It’s very unusual because we wouldn’t expect it. This is the first time a long-period comet family member was seen breaking up before passing closer to the Sun.”

Right now, we seem to be in a ‘comet drought,’ though comet C/2020 F3 NEOWISE put on a fine show last summer. You have to go all the way back over a generation now to the appearance of comets Hyakutake and Hale-Bopp in the late 1990s for the last truly spectacular ‘Great Comets…’ right before film photography gave way to digital imaging. And while there isn’t a great comet inbound yet, Comet C/2021 A1 Leonard may put on a solid showing in December 2021, shinning at +1st magnitude in the dawn.

Is a large chunk of comet related to Y4 ATLAS and the Great Comet of 1844 still out there? Perhaps… but we may have to wait five millennia to find out. 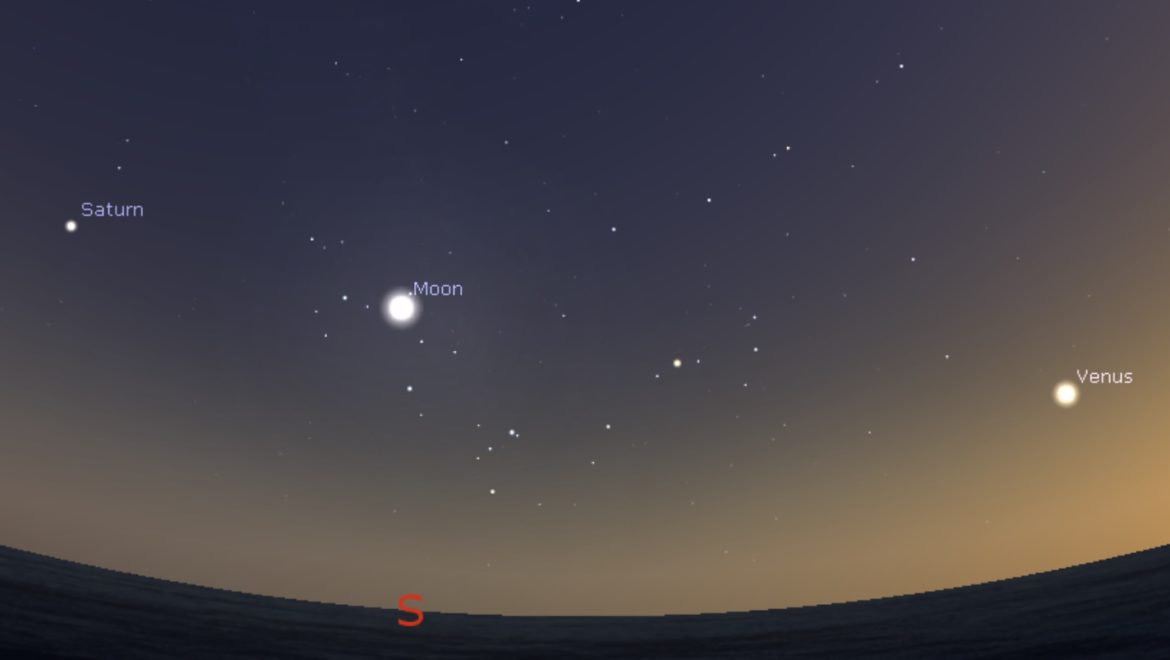 The September Sky: The glories of the summer Milky Way still linger post dusk. Up north, the famous summer triangle asterism rides high, with the stars Deneb, Altair, and Vega at its three corners.

The biannual equinox is short for ‘equal nights,’ a moment twice a year (once in March and again in September) when the rotational pole of the Earth is at a 90 degree perpendicular angle to the Sun, and day and night are equal worldwide. The equinox season is also special for a few other reasons: One is because it also marks GEOSat eclipse season. This is the period of a few weeks on either side of the equinox where distant satellites in geostationary/geosynchronous orbit seem to flare briefly into visibility, before vanishing into Earth’s shadow. Another phenomenon to watch for near the equinox is a peak in aurora activity. This biannual surge used to be a complete mystery until it was explained by what’s known as the Russell-McPherron Effect, which posits that solar wind streams through fissures opened in the Earth’s magnetic field. This occurs because the opposing magnetic field of the Earth is at its weakest angle right around the equinox. In 2021, we’re just now coming off a profound solar minimum, as Solar Cycle #25 gets underway in earnest. The jury is still out on whether or not the next solar cycle will ‘dazzle’ or ‘fizzle,’ though we’ve already seen some heightened solar activity worldwide in late August.

The Planetary Rundown for September 2021: This month offers a true treat for evening skywatchers, as every naked eye planet is visible immediately after sunset. Mars is toughest, at just 12 degrees from the Sun at the start of the month, well below Mercury and Venus to the west. The gas giant planets Jupiter and Saturn rule the night rising in the east, fresh off of opposition last month. As an extra challenge, try spotting +8th magnitude Neptune with binoculars or a telescope in Aquarius this month. Fun fact: Neptune was discovered in the same constellation in 1846 after predictions made by astronomer Urbain Le Verrier), and has only completed one orbit in the last decade since discovery.

Highlighted object (northern hemisphere) Messier 57 The Ring Nebula – it was one of the first deep sky objects I ever went after. Situated in the constellation of Lyra the Lyre, M57 is a fine planetary nebula located about midway between the bright stars Beta and Gamma Lyrae, making it an easy find. I can just spy the ‘ghostly doughnut’ of M57 with binoculars from a dark sky site, and it really jumps out in a telescopic view. M57 is located approximately 2,300 light-years distant.

What you’re seeing is a star at the end of it’s life, ejecting gas and dust in its final death throes back into space. A challenging +15th magnitude white dwarf sits in the center of M57. Our Sun may do the same about 5 billion years from now, though a 2013 study cast doubt on whether we will also one day host a planetary nebula for future denizens of the Milky Way to enjoy at star parties. Fun fact: the term ‘planetary nebula’ actually has very little to do with planets: rather, early astronomers such as Charles Messier thought they appeared ‘planetary-looking’ while he was compiling his famous deep-sky catalog… and the name stuck.

Highlighted object (southern hemisphere): The Wild Duck Cluster Messier 11 – Many observers tend to overlook open clusters, which is a shame. Often, these loose stellar groupings still have enough ‘punch’ to go after, even from light-polluted urban sites. One of my favorites is M11. I often think of it as in the constellation of Aquila as it lies just off of the Eagle’s tail, but it’s actually just across the border in the tiny constellation of Scutum the Shield.

M11 is at southern declination of just over -6 degrees, making it a fine object for either hemisphere. At 6,200 light-years distant, M11 lies in the Sagittarius Arm of the Milky Way, towards the galactic center. At the eyepiece, M11 has a ‘powdered sugar’ look.

Challenge object (Northern Hemisphere): While you’re in the constellation Lyra checking out M57, try and see if you can resolve the famous ‘Double-Double’ star Epsilon Lyrae. The quadruple system is about 1.5 degrees from the brilliant Vega. Splitting the 210” pair is easy, even in binoculars; the challenge is to split the ‘pair into pair(s),’ both of which are only about 2.5” apart. This amazing system lies 162 light-years distant.

Challenge object (Southern Hemisphere): It’s a true irony of the night sky. Red dwarf stars, the most common type of stars in the universe are too faint to see with the naked eye. One of the brightest is the +6.6 magnitude star AX Microscopium in the obscure constellation of the Microscope. This star is 12.9 light-years distant, and offers a fine example of a nearby solitary red dwarf to check off of your life observing list. The coordinates for AX Microscopium are: RA: 21 Hours 18’ 35”, Declination -38 Degrees 46’ 49”.

17th-Comet 6P/d’Arrest at perihelion (+9th magnitude, 93 degrees east of the Sun in Sagittarius at dusk)

20th-762 Pulcova occults +7 magnitude star for Mexico and US, in the brightest asteroid stellar occultation for 2021.