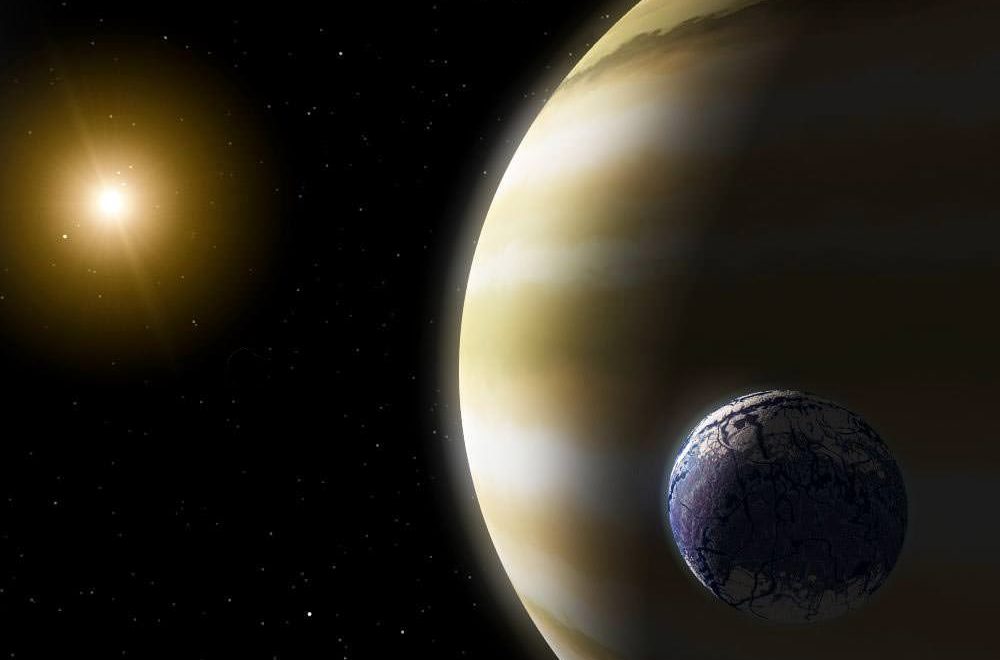 Researchers delving into the Kepler data turn up a good exomoon candidate. 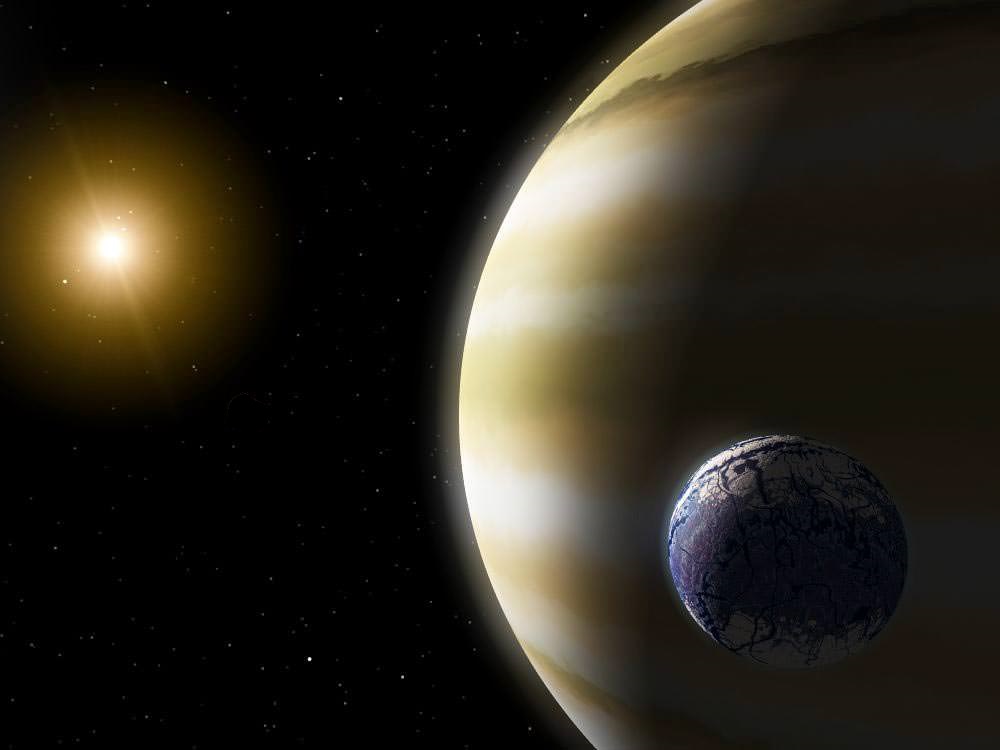 An artist’s conception of a giant exomoon around a remote world. Credit: NASA

When it comes to exoplanet discoveries, ‘exomoons,’ or moons orbiting worlds around stars beyond our solar system are the hot new deal. After all, every planet in our solar system (except Mercury and Venus) has moons, and most have several. It only stands to reason that most Jupiter-sized exoplanets should also possess moons of their own.

But finding the signal in the noise hasn’t been easy. To date, 4,928 exoplanets are known of and counting. Of these, a good portion are known of due to the transiting method of detection, watching as a tell-tale tiny dip in the star’s light occurs as the planet transits or passes in front of its host star from our line of sight. This method, however, has its drawbacks, as it preferentially detects ‘hot-Jupiters,’ or large gas giant worlds in tight orbits.

Finding a moon in an orbit around a transiting exoplanet is even trickier, as researchers need to find an even smaller ‘signal-within-a-signal’ inside an already subtle fluctuation. This signal also needs to be teased out of starspot activity and the intrinsic variability of the host star itself.

“Exomoons are intrinsically smaller than the planets and thus more challenging to find,” Says David Kipping, Columbia University astronomer and researcher on the study. “Further, their signals occur almost simultaneous to the planetary signal, meaning they land on top of each other and are difficult to disentangle.”

The NASA-supported study published in the Journal Nature Astronomy  involved exoplanet researchers from around the world. The team looked at 70 candidates in the Kepler Space Telescope data. Launched in 2009, Kepler stared at a section of sky spanning the constellations Cygnus, Hercules and Lyra along the galactic plane for four years. A failure of a second of four reaction wheels saw Kepler ending its final days in an extended exoplanet hunt along the plane of the ecliptic, using the solar wind pressure as a third ‘reaction wheel’ to stabilize the spacecraft.

The worlds were selected because they passed criterion for either showing minute timing variations in the data, or hinted at direct transit signals of the moons themselves.

“We don’t know for sure, but we but hypothesize that Jupiter-like planets would be one excellent place to look, given the abundance of moons around Jupiter and Saturn and the relatively massive disks of material thought to exist around such planets whilst they form.” says Kipping. “Another interesting place to look is rocky planets resembling Earth. In either case, planets close to the star are best avoided, since the star can essentially rip off moons from such close-in planets.” Of the candidates, only three exhibited smaller signals perhaps indicative of orbiting exomoons. But only one passed final muster upon further scrutiny: Kepler-1708 b.

The first earlier potential exomoon discovery was Kepler-1625 b-i, found in 2017, though this claim has also been disputed in recent years.

“There is really only just one previous candidate to compare to,” says Kipping. “I would describe this is a signal for which there best astrophysical model identified to explain the data in a planet+moon scenario, which is statistically strongly favored over the alternative astrophysical model of a planet alone. Further, we can find no cause for concern of suspicion to reject this model (versus) extensive testing of the other information we have for this target.”

The system where the discovery was made is interesting in its own right. Kepler-1708 is a sun-like F-type main sequence star slightly more massive than our Sun, 1,667 parsecs (~5,500 light-years) distant. Kepler-b is a 4.6 Jupiter mass world in a 737 day orbit, 1.6 AU from its primary. The suspected exomoon Kepler-1708 b-i is a sub-Neptune sized-world in a 4.6 day orbit, 500 million miles (twice the earth-Moon distance) from its primary.

Are exomoons habitable? Kepler-1708 b’s orbit is roughly equal in size to Mars in our own solar system, which hints at the idea that Kepler-1708 b-i might not be a half-bad place, climate-wise. Tantalizing discoveries like Kepler b-i will be prime targets for the recently launched and unfolded James Webb Space Telescope, once it reaches its home at L2 next week and begins its lengthy commissioning phase. JWST is expected to begin science operations in mid-2022. 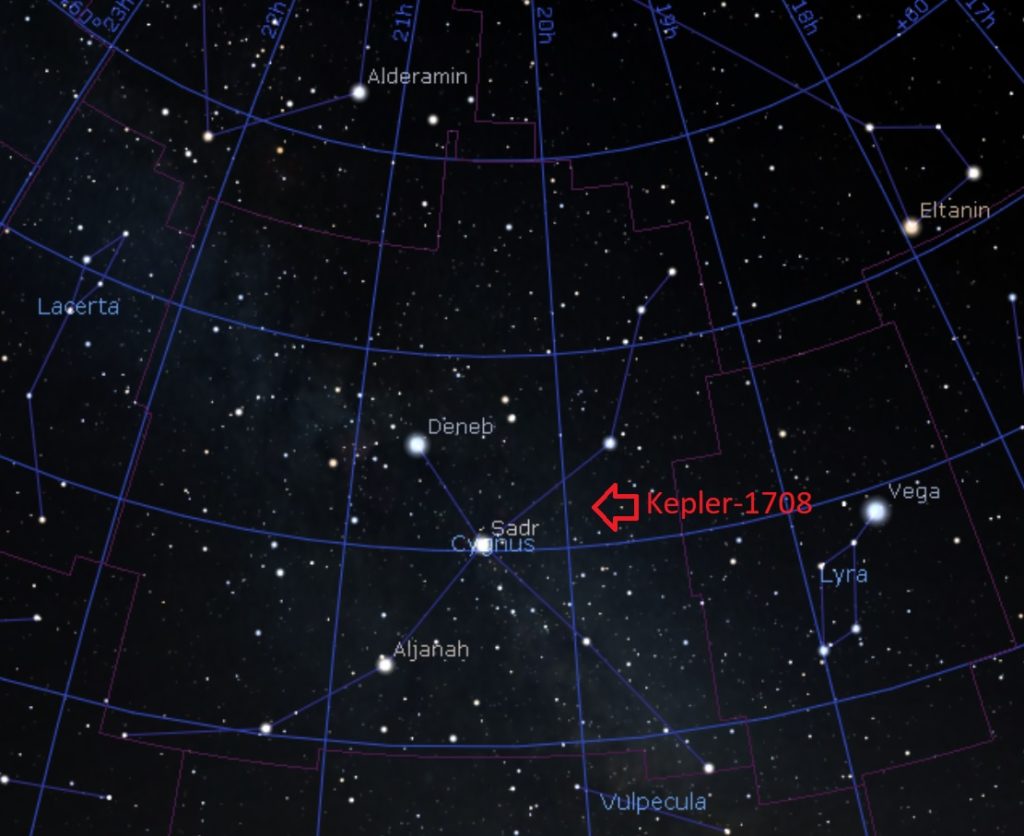 The rough location of Kepler-1708 in Cygnus. Credit: Stelalrium

Finding Kepler-1708 with a backyard telescope is a difficult but not impossible prospect, as the primary star shines at a faint magnitude +16 in the constellation Cygnus. The star Kepler-1708 is not far from +2.9 magnitude Delta Cygni. Another transit sequence for Kepler-1708 b-i will occur in early 2023, and may confirm or deny the exomoon claim.

Expect to see the menagerie of distant worlds grow in coming years as more exoplanet surveys come online, to include the disocovery of more elusive exomoons.