A novel twist on a proven method to find exoplanets yields a distant and strange world.

The location of the exoplanet source in the study (inset, left) along with an artist’s concept of the system (right). Credit: X-ray: NASA/CXC/SAO/R. Di Stephano et al. Optical: NASA/ESA/STScI/Grendler/Illustration NASA/CXC/M. Weiss

We live in a golden age of exoplanet discovery. In just under three short decades, we’ve gone from an era where no planets were known of beyond our solar system, to a wonderfully strange menagerie of 4,868 known worlds and counting. Now, to this list of ‘hottest, fastest, densest, etc,’ we might just be able to add another first, with the discovery of the first world known to exist beyond our galaxy.

The detection came from a tried and true method, employed in a unique fashion. Missions such as NASA’s Kepler and TESS (the Transiting Exoplanet Survey Satellite) use what’s known as the transit method. This is done by looking to detect an unseen planet as it passes in front of its host star, slightly dimming its light output in a predictable fashion. Of course, most orbits aren’t aligned to our line of sight, meaning that the transit method preferentially detects ‘hot Jupiters’ on fast orbits close to the target host star.

Astronomers realized that the transit method could also be used on distant targets, were the compact illumination source was sending out a large amount of x-rays. Such a system would host either a black hole or pulsar in a tight orbit around a massive star, drawing away material and emitting copious amounts of x-rays.

In the study, astronomers used the Chandra X-ray observatory to look at 55 systems in  the M51 galaxy, 64 systems in M101, and 119 systems in M104. They hit pay dirt with a brief x-ray transit in the Whirlpool galaxy Messier 51 (Messier 51).

“We are trying to open up a whole new arena for finding other worlds by searching for planetary candidates at x-ray wavelengths,” says Rosanne Di Stefano (Center for Astrophysics at Harvard and Smithsonian) in a recent press release, adding that the “strategy… makes it possible to discover them in other galaxies.”

The bizarre world, known as M51-ULS-1, seems to be a Saturn-sized planet, orbiting a binary pair consisting of either a black hole or a pulsar in a tight orbit around a main sequence star, 20 times as massive as our Sun. Not only must the world host a strange-looking sky, but it must have had a tumultuous past, as the survivor of a cataclysmic supernova that spawned the black hole or pulsar near the system’s center.

The sad fact is though, the system may never be confirmed, or at very least, confirmation may be a long time coming: M51-ULS-1 is on a projected 70 year orbit, meaning we may not see the planet transit in front of the system’s x-ray jet until the end of this century.

“Unfortunately, to confirm that we’re seeing a planet we would likely have to wait decades to see another transit,” Nia Imara (University of California at Santa Cruz) said in a recent press release. “Because of the uncertainties about how long it takes to orbit, we wouldn’t know exactly when to look.” 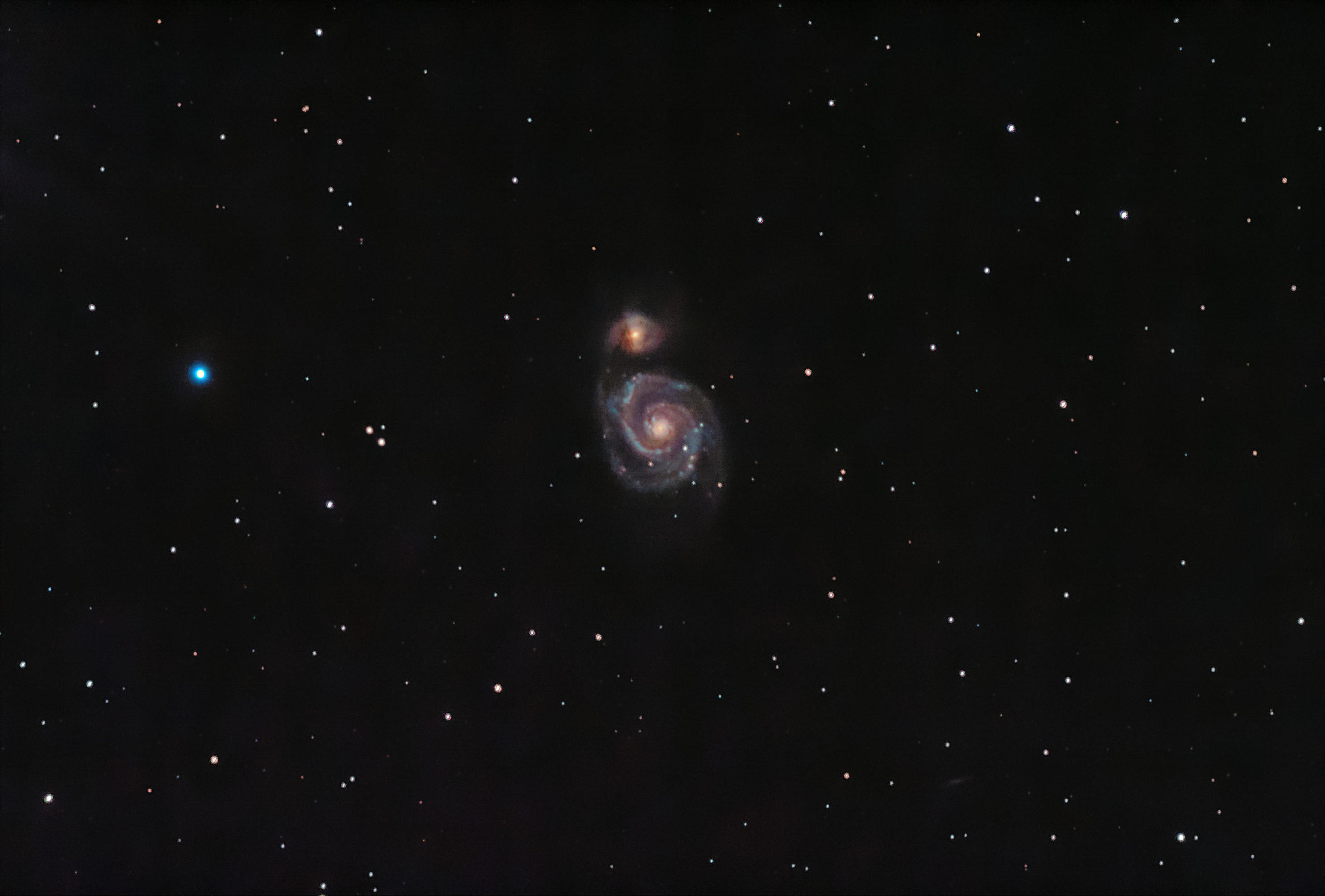 You can see M51 for yourself: the +8.4 magnitude galaxy is a fine deep-sky object. Though I always know to look for it just below the end of the handle of the Big Dipper asterism, it actually lies just across the border of Ursa Major, in the constellation of Canes Venatici. The Earl of Rosse first noted the ‘nebula’s’ spiral structure in 1845, using the massive 72-inch (1.8-metre) Leviathan of Parsonstown telescope in Ireland, then the largest telescope in the world. Messier 51 is 31 million light-years distant.

The discovery, though a fleeting a tantalizing one, shows that such an exotic method for remote exoplanet detection is possible. Chandra and the European Space Agency’s XMM-Newton X-ray mission have produced a treasure trove map of the x-ray sky, a database that may well contain more transiting exoplanets… and last week, the Decadal Survey for Astronomy and Astrophysics announced that one of its smaller explorer missions on the community’s wish list is Lynx, a more powerful successor to Chandra.

One thing’s for sure: it’s a big Universe. What other exoplanets are out there in the data, awaiting discovery?