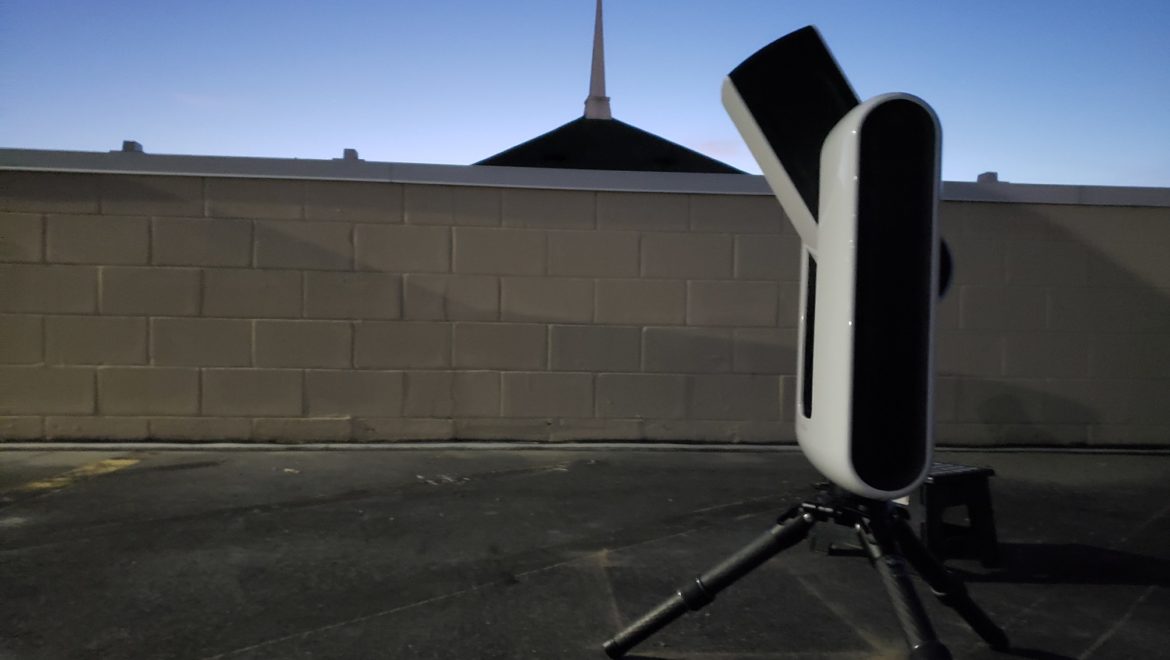 Astronomy January 2022 sees the ‘Christmas Comet of 2021’ reach perihelion, while planets line up at dusk. 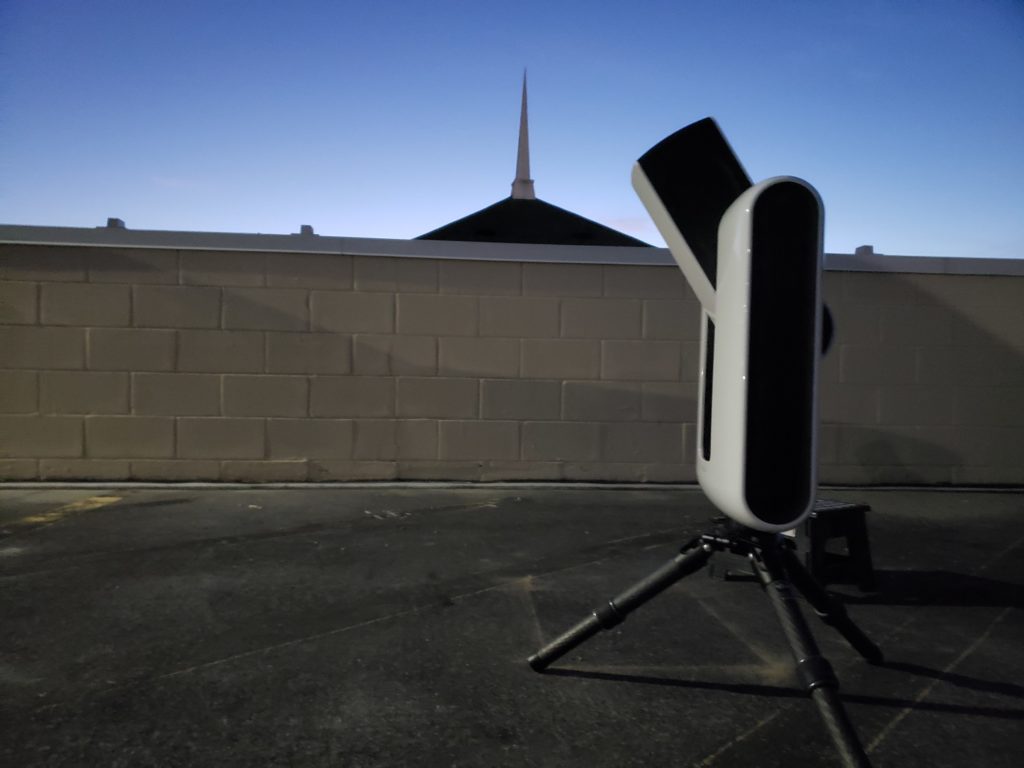 The month of January may be the first full month of northern hemisphere winter, but there’s always several reasons to brave the cold. Ironically, the coldest nights are often the clearest and most stable, as the frigid winter air radiates heat back into space.

January evenings give us a glimpse of our nearby galactic neighbors in the Orion Spur arm of the Milky Way galaxy. Flashback to January 2020, and all eyes were on the bright star Betelgeuse, as the bright star in the shoulder of Orion underwent a historic dimming. And although 2020 didn’t see the red giant star go supernova, January would be a fine time for the giant star to finally burst, either tonight over thousands of years from now.

In the northern or southern hemisphere, the December 31st sky on New Year’s Eve always has a fine marker to ring in the year: Sirius (Alpha Canis Major), the brightest star in the sky, culminates at midnight. Sirius is actually only 8.7 light-years distant, and at declination -16 degrees 45’, is visible just about worldwide.

Fun fact: Though it’s northern hemisphere winter in January, the Earth is actually at perihelion or its closest point to the Sun in the current epoch early in the first days of the year, as the tilt of the planet is a much larger driver of the seasons.

The Moon reaches New phase early in January on the 2nd, just 19 hours after perigee on New Year’s Day. Full Moon occurs on January 17th, also known as the Full Wolf Moon. In 2022 the path of the Moon is ‘ecliptic-like’ this year, but expect it to get steeper towards 2025. This is because the 5 degree tilt of the Moon is inclined versus the ecliptic (the outline of the path of the Earth around the Sun), not the tilt of the Earth’s axis. This means that the path of the Moon seems to go from shallow to steep to back again versus the ecliptic in an 18.6 year cycle, known as the Precession of the Line on Apsides. 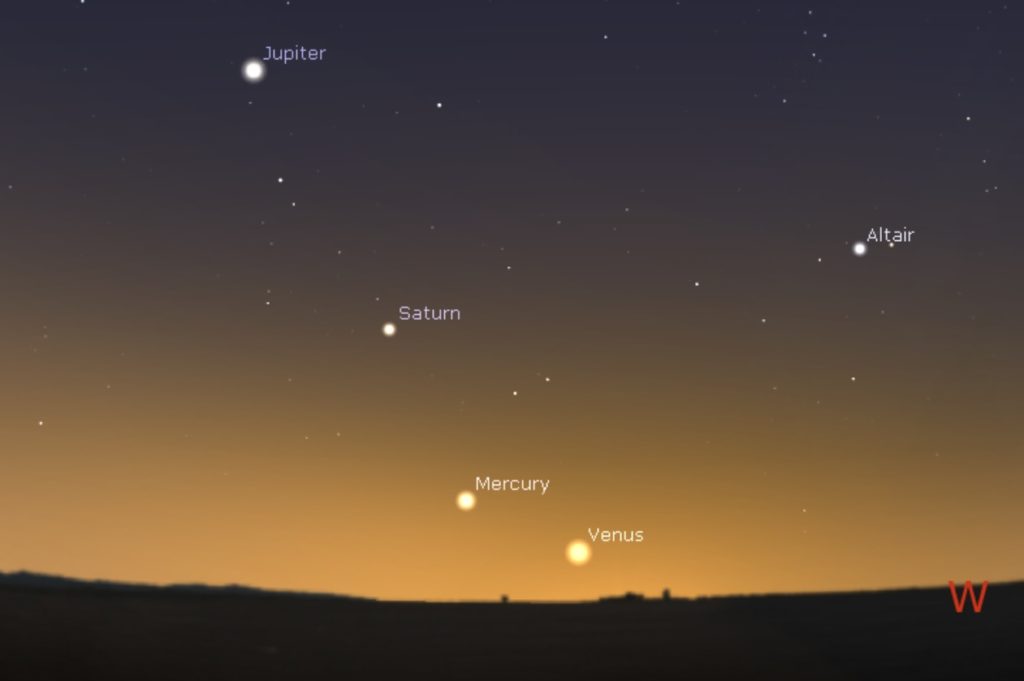 Looking westward on the first dusk of 2022. Credit: Stellarium

The planetary rundown in January 2022: The naked eye planets are nearly all in the evening sky at the beginning of of 2022; only lonely Mars holds down the fort high to the south at dawn. You’ll have to hurry to see Venus though, as it speeds towards inferior conjunction between the Earth and the Sun shortly after the first week of January, to emerge in the dawn and spend the remainder of 2022 there, ruling the morning sky.

January meteors: This just might be the year to spy the elusive Quadrantid meteors. Named after the now defunct constellation of Quadrans Muralis (the Mural Quadrant), the ‘Quads’ have a very narrow peak, making them very elusive. The good news is, the Moon hits New just a day before the expected peak of the Quads, which arrives on January 3rd at 20:40 Universal Time (UT). The 2022 Quadrantids is expected to hit a Zenithal Hourly Rate (ZHR) of 60-200 meteors per hour. 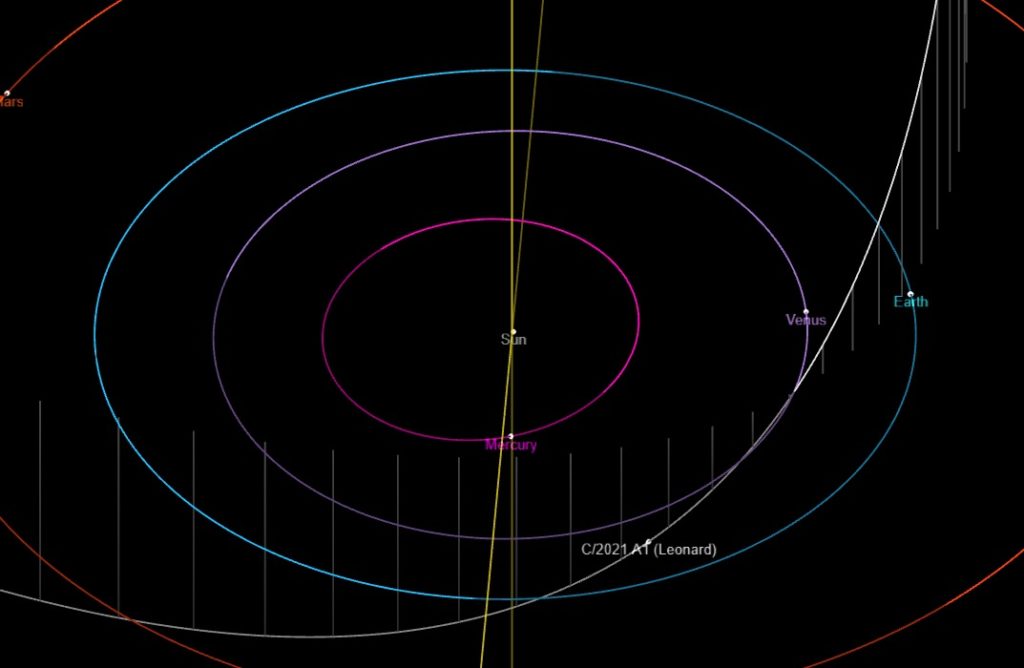 Comets: A1 Leonard reaches perihelion on January 3rd 0.62 AU (92.8 million kilometers) from the Sun, exactly one year after discovery. Currently at magnitude +4.5 in the constellation of Piscis Austrinus, Comet A1 Leonard is now well-placed for southern hemisphere observers. On an ~80,000 year orbit inbound, A1 Leonard is destined to head out of the solar system after perihelion for good, as celestial mechanics dispatches the comet out into the Milky Way Galaxy to become someone else’s ‘interstellar object’ millions of years in the future. Comet A1 Leonard is now headed off in general the direction of the +3.5 magnitude star Mu Serpentis, 156 light-years distant. 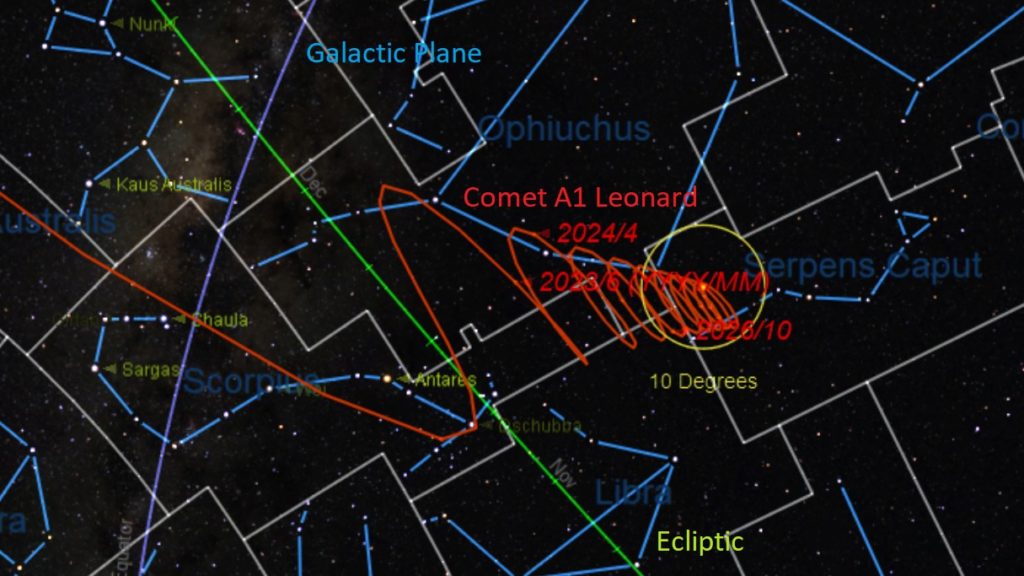 The celestial path of Comet A1 Leonard over the coming decade, until 2032. Credit: Dave Dickinson/Starry Night.

Deep Sky highlight (northern hemisphere) – One of our favorite open clusters rides high on January evenings. Messier 35 (M35) is an easy find with binoculars, in the foot of the zodiacal constellation of Gemini the twins. Crank up the magnification, and thousands of stars overflow the field in a magnificent view. The cluster is also very near the ecliptic plane, sitting in the celestial position that the Sun occupies during the annual June northward solstice. M35 is 2.8 kilo-light-years distant. 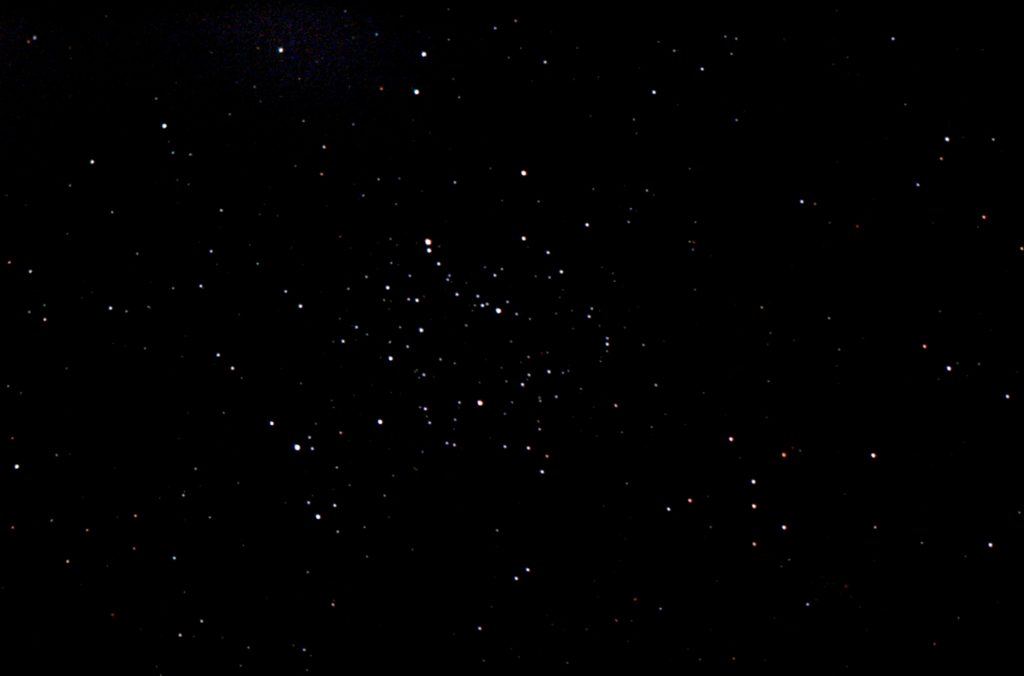 Messier 35 from urban skies. Credit: Dave Dickinson, a Stellina capture of about 90 seconds.

Deep Sky highlight (southern hemisphere) – The Ringed Galaxy NGC 1269: A fine example ring galaxy (and a bit of a historical mix up) sits in the rambling southern constellation of Eridanus the River. 33 million light-years distant, NGC 1269 is nearly face-on from our perspective. 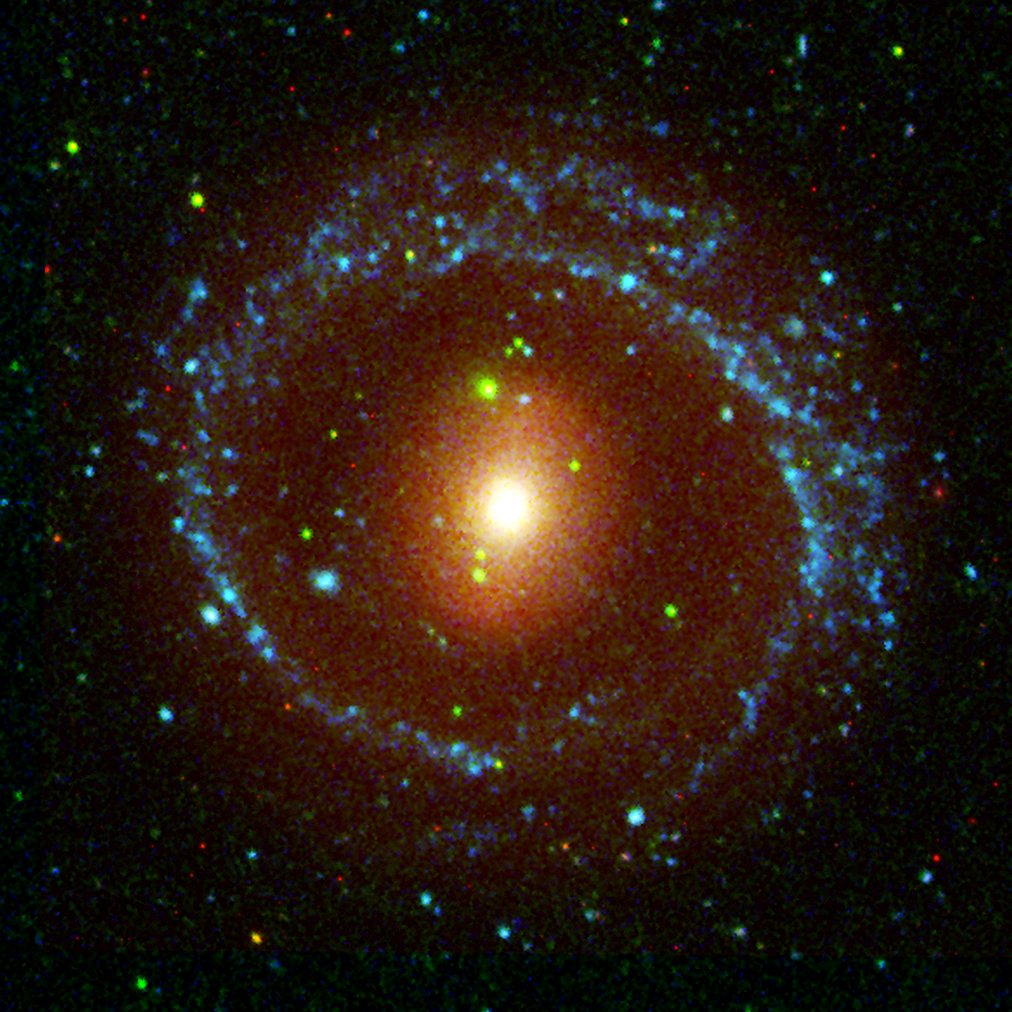 Shining at magnitude +8.5 and a generous 5’ by 4’ across, NGC 1269 is just two degrees north of the +4.3 magnitude star 82 (e) Eridani, making it an easy find with a moderate- to large- telescope. The galaxy is also sometimes listed as ‘NGC 1291’ due to an early 19th century mix-up: Astronomer John Herschel came across the deep-sky object in an 1836 southern sky survey and dutifully recorded it as NGC 1269—though unbeknownst to Herschel—celestial cartographer John Dunlop had already noted the galaxy as NGC 1291 about a decade prior. 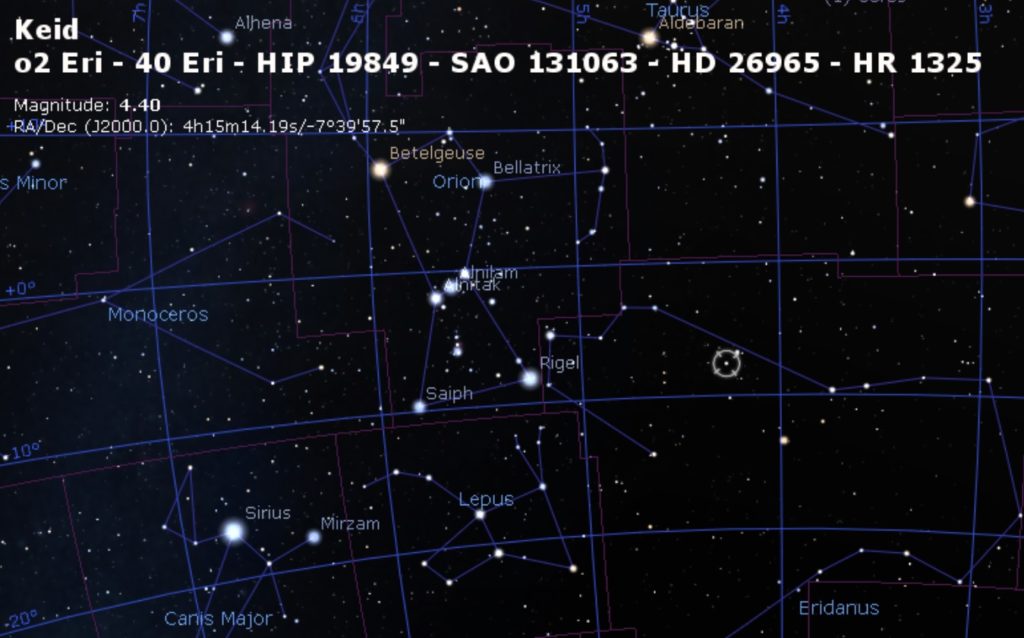 Challenge object (northern hemisphere) – The 40 Eridani B Triple System: Have you ever seen a red dwarf? How about a white dwarf? The Omicron Eridani (40 Eridani) triple star in the northern end of the meandering constellation Eridanus offers a unique opportunity to check both off of your observing life list. The +4.4 primary offers a fine guidepost to the system… now, crank up the magnification, and look for a +10th magnitude pair 8” apart, just over an arcminute from the primary. These two are the one each red and white dwarf stars. 40 Eridani is 16 light-years distant. 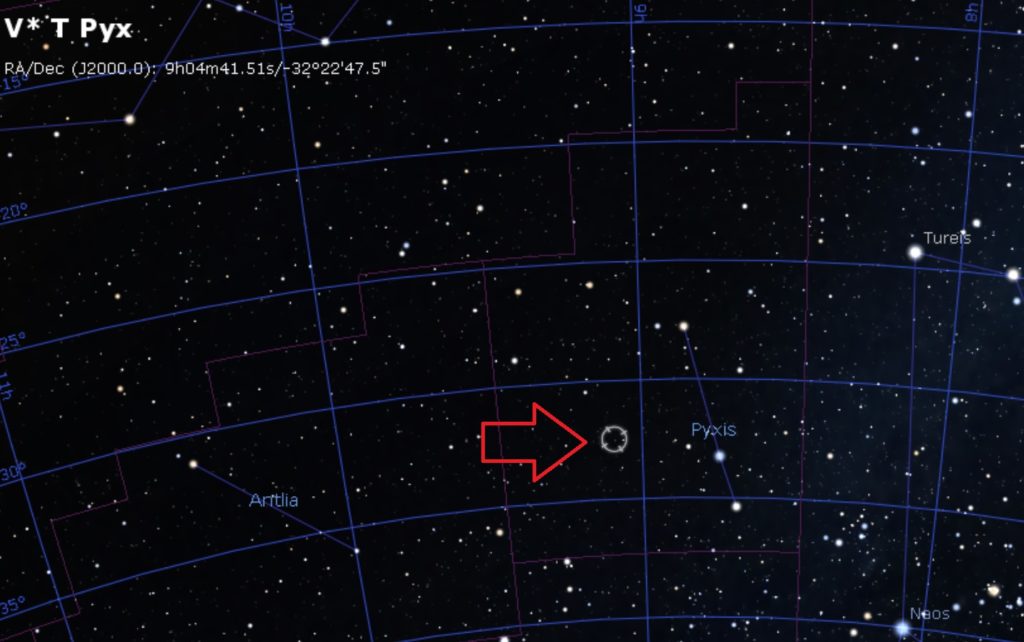 Challenge Object (Southern Hemisphere) – Its always worth scanning the vacant southern sky region east of +3.7 magnitude Alpha Pyxidis for an elusive star: T Pyxidis is a member of a rare type of variable star, known as a recurrent nova. Usually, T Pyx is undetectable, below +14th magnitude. On random decades, however, T Pyx will flirt with naked eye visibility. This has occurred in 1902, 1920, 1944, 1966 and finally again in 2011. You’re seeing a main sequence star, dumping material on a white dwarf, which flares occasionally in brilliant fashion. When will T Pyxidis pop again?