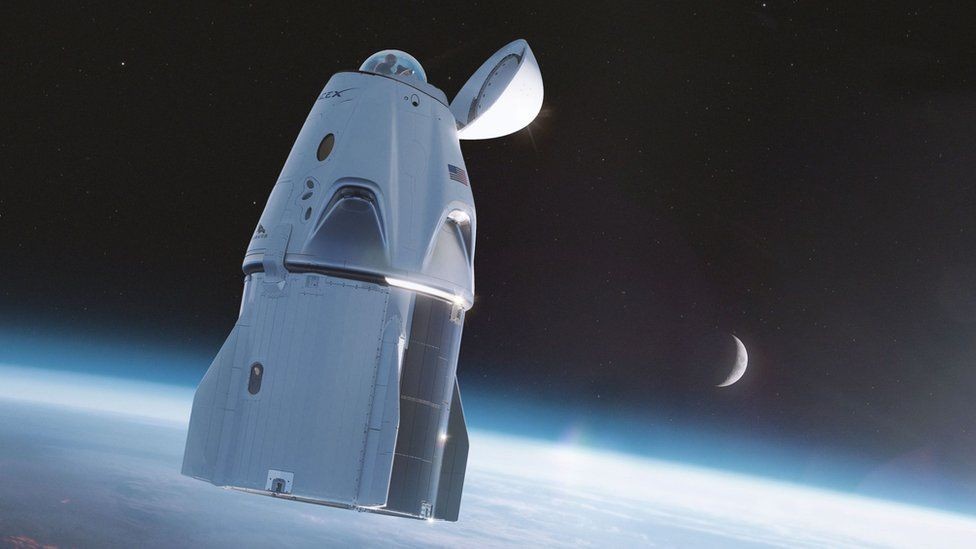 How to Spot the Inspiration4 Mission in Orbit This Week

SpaceX’s historic all-civilian Inspiration4 mission is visible if you know when to look for it.

An artist’s impression of Inspiration4 in space. Credit: SpaceX.

Spaceflight will never be the same.

The crew consists of Jared Isaacman, Hayley Arceneaux, Christopher Sembroski and Sian Proctor. Money raised for the mission and proceeds are going towards St. Jude’s Hospital.

Crew Dragon Resilience will launch tonight atop a twice flown Falcon 9/Block 5 rocket. After launch and deployment, the Falcon Stage 1 booster will head for recovery on the Just Read the Instructions landing platform at sea.

The crew will spend a three day mission in space, set for splashdown landing in the Atlantic on Sunday Sept 19th and recovery by the SpaceX vessel GO Navigator.

Inspiration4 is headed toward Low Earth orbit (LEO), in an orbit similar to ISS inclined 51.6 degrees relative to the equator 590 km (370 mi) up, in a 90 minute orbit.

The good news is, with a steep inclined orbit, Crew Dragon Resilience and Insiration4 will—like the International Space Station—be visible over most of humanity while it’s in orbit. And while the 8.1 meter-long capsule won’t be as bright as the brilliant station, it will be at decent +1 magnitude ‘star’ on a good zenith pass.

If the mission launches on time tonight, there’s also a good chance that the launch might even be visible as it travels up the U.S. East Coast minutes after liftoff. We’ve seen night launches from Florida from here in downtown Norfolk before, and they can put on an amazing display at dawn or dusk.

Heavens-Above should start tracking the launch once its in orbit, and it will probably turn up as NORAD COSPAR ID 2021-083A. Plugging in Two-Line-Element sets supplied courtesy of satellite tracker Marco Langbroek into Orbitron, we see good early passes for Inspiration4 favoring 20-50 degrees north latitudes at dawn, and 10N to 30S latitudes at dusk. We’ll be updating sighting opportunities worldwide on Twitter as @Astroguyz.

Watching for Dragon an Inspiration4 is as easy as standing out and scanning the sky at dawn or dusk, with no optical assistance needed: you just need to know what time and direction to look. Satellites in LEO shine via reflected sunlight, and look like steady moving ‘stars’ in the twilight.

Space is getting crowded, as the roll call of humans in orbit is the largest its been in recent years. This week, we have:

-3 crew on China’s new Tiangong station (though there’s word that the crew may return to Earth this coming Friday).

-4 crew on Inspiration4 for a grand total of 14 humanoids in space.

This briefly breaks the record of 13 people in space at once set in March 14, 1995, with 7 astronauts aboard STS-67 space shuttle Endeavor, 3 cosmonauts aboard Mir, and 2 cosmonauts and one astronaut aboard Soyuz TM21.

…and there’s more to come, as Axiom Space plans to partner with SpaceX on future tourist missions to the ISS, the first of which may launch as early as January 2022.

Is civilian space the wave of the future? Will the argument of ‘billionaires are ruining space’ rear its ugly head again, like it did during the recent crewed Blue Origin and Virgin Galactic flights? Are private astronauts referred to as ‘privonauts?’

Whatever your opinion is, you can at least catch Inspiration4 on a visible pass near you this week, and marvel at the potential for what may be to come.