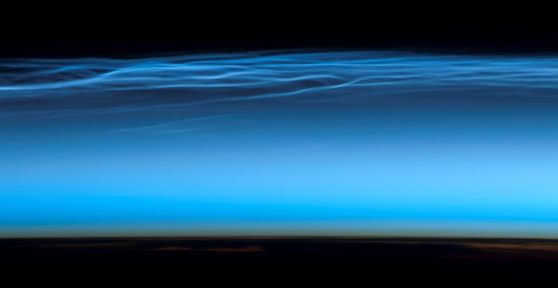 A recent NASA mission may have solved the mystery of  ‘meteor smoke’ as the source of a key element.

Watch the night sky long enough, and you’re bound to see one. On any given evening, it’s a common sight to see a meteor slide silently by. These are from ancient streams of dust particles orbiting the Sun, laid down by comets and asteroids. The Earth plows through these streams daily, carving out a 12,750- kilometer wide tunnel in its path around the Sun.

When these cosmic dust motes burn up, they dissipate in the Earth’s atmosphere. This ‘meteor smoke’ has been, until recently, tough to study: most of it lingers high in the tenuous atmosphere, gently mixing with lower layers over time. Balloon and sub-orbital rocket-based detectors have only hinted at its existence.

Over the past decade, however, a mission has been able to carry out a first survey of this little known layer. NASA’s Solar Occultation for Ice Experiment (SOFIE) launched on NASA’s Aeronomy of Ice in the Mesosphere (AIM) Earth observation mission in 2007. From its vantage point in low Earth orbit, SOFIE looks at the thin twilight region just along the limb of the Earth, illuminated by the Sun. This allows it to see tiny suspended aerosol particles held aloft high in the atmosphere.

This also allows SOFIE to obtain the spectrum of elusive meteor smoke, seeing key elements such as magnesium, iron, silicon and oxygen. The Earth scoops up from 2 to 200 tons of space dust and material each day. Data from SOFIE could help scientists not only refine this number, but work towards understanding its composition.

“This was tremendous progress even though we had a range of possible answers,” says Mark Hervig (GATS Inc.) in a recent press release. “There are questions and mysteries in our atmosphere that meteoric smoke may play a role in… it’s really frontier stuff.”

Luckily, scientists have another comparative source: meteor dust collected in the high and dry plains of Antarctica by a recent expedition out of the University of Leeds in the United Kingdom. Material collected on this survey turned out to be made up of the mineral olivine, and contained the same ratio of magnesium, silicon and oxygen seen in SOFIE observations.

The Impact of Meteor Smoke

These two key measurements allowed scientists to revise the amount of material entering the Earth’s atmosphere daily down to about 25 tons per day, on the lower end of the scale. But there’s lots of other roles that meteor smoke may play in the environment.

One is the formation of high altitude noctilucent or iridescent clouds. These are seen shining high in the sky at high latitudes at dusk, and their displays increase during the summertime. Water molecules and ice are the suspected source for noctilucent clouds, and these need a tiny particle to cling to and nucleate around. One possible source (along with rocket exhaust from launches) is meteor smoke. The occurrence of noctilucent clouds seems to be increasing over the past century, perhaps due to the increasing amount of moisture in the atmosphere resulting from climate change.

(Meteor) Smoke on the Water

Meteor smoke may even play a key role in propagating life on Earth as well. Specifically, the energy-generating process of photosynthesis requires the element iron to work… but for plankton at sea, iron is often scarce. Some of this key element does blow in as dust and sand off of Earth’s deserts, but recently, scientists have suggested another source for iron fertilization: the steady downward rain of meteor smoke.

This cosmic source may just be providing a key element needed to fuel life on Earth. A fascinating thought to consider, the next time you see a lingering smoke train from a brilliant bolide meteor, piercing the night sky.